Home » Americas » After Nearly a Year of Unrest, Portland Leaders Pursue a Crackdown

PORTLAND, Ore. — After the protests have concluded, sometimes in the early morning hours, Margaret Carter finds herself climbing into her gray Toyota Camry and cruising the streets of Portland so she can see the latest damage for herself.

Ms. Carter, 85, has been downtown to the Oregon Historical Society, where demonstrators have twice smashed out the windows, recently scrawling “No More History” on the side of the building. She has driven past the local headquarters of the Democratic Party, where windows have also been shattered. Last week, she found herself at the Boys & Girls Club in her own neighborhood, nearing tears at the scene of costly window destruction at a place she has worked so hard to support.

“Portland was a beautiful city,” said Ms. Carter, who was the first Black woman elected to the Oregon Legislative Assembly and is now retired. “Now you walk around and see all the graffiti, buildings being boarded up. I get sick to my stomach. And I get angry.”

After almost a year of near-continuous protests since the police killing of George Floyd in Minneapolis, Portland’s city leaders are signaling that it may be time for a more aggressive crackdown on the most strident street actions.

Mayor Ted Wheeler, himself a target of many of the protests as he oversaw a police department that has repeatedly turned to aggressive tactics, last week put into place a state of emergency that lasted six days and vowed to “unmask” those demonstrators who engaged in repeated acts of vandalism or arson, saying it was time to “hurt them a little bit.”

The demonstrations over racial justice and police violence have struck a chord with many Portland residents, and the mayor’s effort has infuriated some in the progressive city’s more liberal corners. Mr. Wheeler’s call for crowdsourced surveillance has alarmed civil rights advocates, and critics say the city has failed to bring an end to acts of violence by the Portland Police Bureau, a demand echoed by hundreds of demonstrators who have not destroyed property. 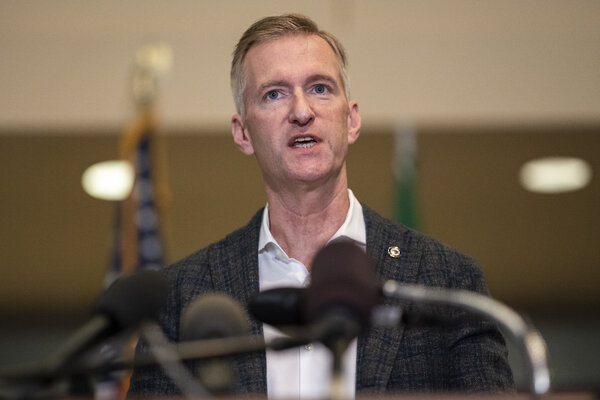 One of the latest flash points came this month, when a police officer fatally shot a man in a city park — a shooting that authorities have largely not explained.

“There would not be protests if police didn’t continue to murder people,” Ms. Raiford said. “I wish we cared about life as much as we care about property.”

Protests erupted in thousands of communities around the country after Mr. Floyd’s death, but most gradually petered out. Portland, by contrast, had nightly protests for months, with a broad swath of the community demanding changes to confront racism and inequality in the criminal justice system. The Police Bureau exacerbated tensions, using force and tear gas in ways that have drawn the ire of judges and the Justice Department.

But the crowd sizes have waned, and figures such as Terry Porter, the former Portland Trail Blazers player, have called for an end to destructive demonstrations. Mr. Wheeler seemed to use last week’s conviction of Derek Chauvin, the former Minneapolis police officer who murdered Mr. Floyd, as an opportunity to bring the most raucous of the protests to a close.

As people around the country went into the streets to cheer the conviction, some businesses in Portland boarded up their windows once again. That night, a small group of activists wearing black approached a group of journalists, threatening to smash the cameras of those who remained on scene. The group later shattered windows at two Starbucks stores. One man was arrested after throwing a punch at a police officer.

The crowds the city has seen are often made up of amorphous groups of people who come for different reasons. Chris Davis, the deputy police chief, estimated there were 150 to 200 people among the regular protesters who were prone to engage in property destruction, although the demonstrations often feature smaller numbers.

Those protesters often seen in identity-concealing black apparel and engaging in vandalism are a mix of anarchists and police abolitionists, said David Myers, an activist who has joined many of the city’s protests. He said that while he was OK with those who engaged in property damage to apply pressure on city officials unwilling to impose change, he bemoaned that some of those demonstrators seemed to be sidelining the original Black Lives Matter message and harming the cause. In some cases, he said, businesses owned by Black people or which support the Black community have been attacked.

“I think everybody in that mix wants to say they are B.L.M., but their actions show otherwise,” Mr. Myers said.

Mr. Myers was among a group of Black activists who posted a letter to the protest community last week, decrying “ongoing behavior seen as detrimental to Black Liberation.” Success, it said, requires “thoughtful action.”

The increasing consternation among protesters themselves provided an opening last week for Mr. Wheeler to announce a crackdown.

In his call for the public’s help, Mr. Wheeler urged people to report anything they might overhear about property destruction plans or boasts. He also called for residents to report protesters who appeared to be disguising their identity and to document their license plates for the police. He urged a local college to expel one student currently facing charges in connection with a demonstration if the student is convicted.

Police officers have been attempting to target and arrest demonstrators who engage in property destruction. Using a tactic known as “kettling” that has been used in policing protests around the country despite concerns from civil rights advocates, officers last month surrounded a crowd and began gathering information about each person caught inside the perimeter. The effort “yielded a lot of information,” Mr. Davis said.

In another recent case, after activists lit a fire at the police union headquarters, investigators reported working with an informant in the crowd to identify a suspect.

Mike Schmidt, the Multnomah County prosecutor, has taken a forgiving attitude toward protesters who remained peaceful. When he took office last summer, he effectively dismissed protest-related charges against hundreds of people.

Since then, he said, his office has been focused on protesters who have committed violent crimes or those involving property; for those who are arrested after such crimes, prosecutors will consider restoring lesser criminal charges that were previously dropped. He said his office was also asking judges to impose additional conditions for the pretrial release of some people charged with crimes, requiring them to leave any demonstration in which police officers declare an unlawful assembly or a riot.

Mr. Schmidt said he was frustrated that people were still engaging in property destruction, noting cases like the Boys & Girls Club.

Mr. Myers, the activist, said he was worried about the mayor’s call for members of the public to alert the police when they see people wearing black protester-style clothing, saying it raises the prospect of vigilante actions. “It puts people at risk,” he said.

Mr. Myers said he expected the protests to continue despite the mayor’s efforts to quash them.

Eric Murfitt, who manages Mercantile Portland, a high-end women’s clothing store, said he had heard leaders such as Mr. Wheeler expressing the right determination to end the unrest. But he said he still had not seen a lot of follow-through or results.

Mr. Murfitt said a night of looting in May resulted in $1 million in damage at his store, only days after it had reopened after the coronavirus lockdowns. Later in the year, Mr. Murfitt said, the store’s insurer declined to renew the policy.

US in risky phase as questions hang over transition

Mum says midwife refused to help her because she's vegan

Midterm election results could put the USMCA in jeopardy: experts