Home » Americas » After the Storm, New York Digs Its Way Out

Weather: Overcast, with possible morning flurries and a strong breeze. High in the mid-30s. 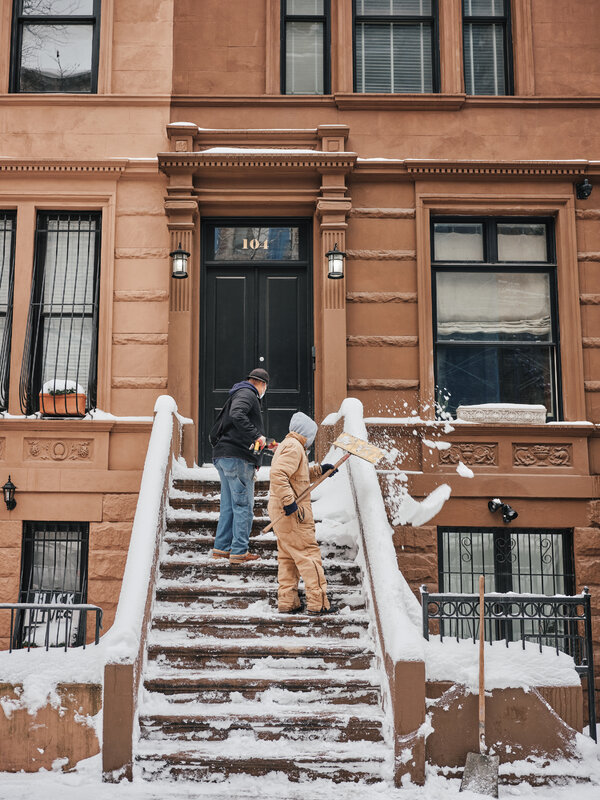 After a second day of snowfall — and there is still some chance of a last flurry or two this morning — New Yorkers grabbed their shovels and got to work clearing sidewalks and digging out cars.

In Inwood, Ken Ion had spent hours on Monday shoveling heavy snow outside the Church of the Good Shepherd. Mr. Ion, 62, had to start all over again Tuesday.

“I’m not 20 years old anymore,” he told Téa Kvetenadze as she reported for The Times. “My bones are tired!”

The city had a thick sheet of snow after one of the heaviest winter storms in recent history.

The wet and heavy snow was perfect for snowmen and snowball fights, but difficult to clear away, Dominic Ramunni, a National Weather Service meteorologist, told my colleague Daniel Slotnik.

The snowstorm was the biggest since the record-setting blizzard of 2016 that dumped 27.5 inches of snow on Central Park. Still, this week’s storm pummeled other parts of the Northeast, like Bloomingdale, N.J., where the snow totaled 26.2 inches.

Last winter was mild in comparison, with just 4.8 inches of snow in New York City over the whole season.

Hours of shoveling for some New Yorkers

Clearing the snow on Tuesday was not for the faint of heart. Leindro Hernandez, 22, wielded a wide metal shovel outside a liquor store in Inwood.

On Ocean Avenue in Brooklyn, Jace Carter, 43, wanted to drive to the grocery store while his children were learning remotely. It took him an hour and a half to heave the snow off his car.

“I’m beat,” Mr. Carter told my colleague Emmett Lindner. “But it’s New York. You gotta do what you gotta do.”

During a news conference Tuesday, Mayor Bill de Blasio advised New Yorkers to keep staying off the roads as snow plows passed through.

“Thank God the vast majority is over now,” he said.

Andrew Yang Says He Has Tested Positive for the Coronavirus

A SoulCycle Instructor Got the Vaccine as an ‘Educator’

The police are searching for the person who stole sacred ceremonial objects from a Brooklyn synagogue. [CBS]

It might be hard to believe considering the all the snow outside, but that’s what New York City’s resident groundhog weatherman predicted on Tuesday morning.

Chuck’s projection method is simple: If he sees his shadow, winter prevails for six more weeks. If he doesn’t, warm weather (and comfortable outdoor dining) is coming soon.

Since 1981, the Staten Island Zoo has typically celebrated Groundhog Day with crowds gathering to watch Chuck emerge from his burrow and search for his shadow. This year, because of the pandemic, the zoo held the ceremony virtually.

“OK, Chuck, it’s time to wake up,” the zoo’s executive director, Ken Mitchell, is shown yelling in the video.

Chuck, looking unamused, quickly scampered from his home and stood still … with no shadow in sight.

Phil might be more famous, but Chuck boasts the highest success rate among weather-prognosticating groundhogs, according to the Staten Island Zoo. New Yorkers will have to wait and see which groundhog was right.

It was 1993, and my teenage son was begging me to take him on a road trip from our Wisconsin home to New York to see one of Simon and Garfunkel’s reunion concerts at Madison Square Garden’s Paramount Theater.

He found a number to call for tickets in the back pages of Rolling Stone.

“I have two good seats just for you,” the man who answered said in a heavy New York accent.

Hesitantly, I gave him my credit card information.

“How ya gonna pick these up?” he asked.

I had no idea.

“Tell ya what I’m gonna do,” he said, before offering the name of a restaurant near the Garden. “You ask for Johnny when you get there. He’ll have your tickets. And make sure you give him a nice tip.”

My wife thought I was crazy to think this was on the level, but my son and I took off for New York. We found the restaurant a couple of hours before the show was to start. And sure enough, Johnny was there with our tickets.

Okotoks reopens amid provincial relaunch, Calgarians urged not to visit