Within hours of a shooting in Times Square that left three bystanders, including a child, wounded, two news conferences were held near the crime scene: one by the Police Department, one by an elected official.

That official was not Mayor Bill de Blasio; the mayor, who is in his last year in office, does not typically appear at shootings where no one has died, a City Hall aide said. The official was Eric Adams, the Brooklyn borough president who is running to succeed Mr. de Blasio.

The symbolism of the moment, and its political upsides, were not lost on Mr. Adams and a leading rival, Andrew Yang, both political moderates. Mr. Yang, the former presidential candidate, held a news conference in Times Square on Sunday morning. Not to be outdone, or even matched, Mr. Adams book-ended Mr. Yang’s appearance with a second Times Square visit on Sunday afternoon.

Both men are running as Democrats in a primary that is likely to determine the next mayor of New York City and is just six weeks away. Though many New Yorkers have yet to pay attention to the race, recent polling suggests Mr. Yang and Mr. Adams are vying for first place.

The shooting near Seventh Avenue and West 45th Street wounded a 4-year-old girl from Brooklyn in the leg. She was shopping for toys with her family. A 23-year-old Rhode Island tourist who had been hoping to visit the Statue of Liberty was also shot in the leg, and a 43-year-old woman from New Jersey was shot in the foot. The victims did not know each other, the police said.

The shooting was frightening. But from a political perspective, it also seemed tailor-made for moderate mayoral candidates like Mr. Adams and Mr. Yang, who are eager to highlight their rejection of defunding the police, a principle that continues to animate the party’s left. In both candidates’ remarks, they also stressed their belief that New York City’s economy could not recover without public safety.

“We’re not going to recover as a city if we turn back time and see an increase in violence, particularly gun violence,” said Mr. Adams, in a blue windbreaker with his name on it.

Mr. Yang, who lives nearby, spoke on Mother’s Day, with his wife, Evelyn, in tow. 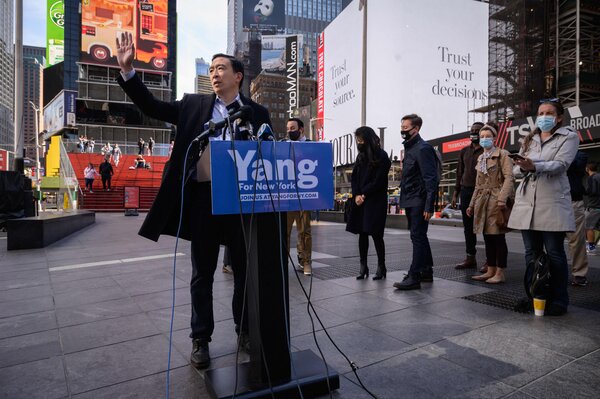 “My fellow New Yorkers, if there’s one thing I want to say to you it is this: Nothing works in our city without public safety, and for public safety, we need the police,” Mr. Yang said. “My message to the N.Y.P.D. is this: New York needs you. Your city needs you.”

“The truth is that New York City cannot afford to defund the police,” he added.

Times Square represents the commercial and tourist heart of Manhattan, itself the financial capital of New York City and the nation. The shooting comes as the city is revving up its marketing engine, with the goal of reviving New York City’s tourist trade.

The police say more than 460 people have been shot this year in New York City, compared with 259 last year and 239 in 2019. Mr. de Blasio routinely attributes the rise in shootings to the societal upheaval wrought by the pandemic, which has created mass unemployment, and also blames a slowdown in the court system. Dermot F. Shea, Mr. de Blasio’s police commissioner, tends to blame recent statewide criminal justice reforms, which he says have made it harder to keep those charged with criminal offenses in jail.

Both Mr. Adams and Mr. Yang took the opportunity to highlight their policing agendas, which include reimagining plainclothes anti-violence units. Mr. de Blasio disbanded his plainclothes anti-crime unit, which had been involved in many police shootings, last year. Both also touted their commitment to criminal justice reform.

‘Our Country Is Being Run by Children’: Shutdown’s End Brings Relief and Frustration