The Federal Bureau of Prisons is planning to oust the warden of the prison where James (Whitey) Bulger, the famous mobster and informant, was murdered in October.

Hugh Hurwitz, the bureau’s acting director, has told multiple people that he plans to replace the warden, Joe Coakley, at the Hazelton prison complex in Bruceton Mills, W. Va., according to a high-ranking official at the agency.

Mr. Coakley, the official said, presided over a troubled prison — nicknamed Misery Mountain — where there are indications that a top suspect in Mr. Bulger’s murder, a gangster named Fotios (Freddy) Geas, was a “shot caller” who wielded unusual influence with both inmates and the staff. The official spoke on the condition of anonymity because he was not authorized to release information to the public.

The killing of Mr. Bulger, just hours after he arrived at the prison, has been a major embarrassment for a federal agency that was already under fire for dangerous conditions, understaffing, sexual harassment and its treatment of elderly and mentally ill inmates.

Mr. Hurwitz, the official said, is considering tapping Bryan Antonelli, the warden at the Williamsburg prison in Salters, S.C., to take over the Hazelton prison complex. He added that Mr. Antonelli is seen by some at the bureau as a “cleanup guy,” who is called in to fix problems at troubled prisons.

The bureau has opened an investigation into the case with about 20 prison officials serving as investigators, according to the high-ranking official, and they have traveled to places that are rarely scrutinized, such as a little-known office in Grand Prairie, Tex. The office, which is responsible for prisoner transfers, may have skipped a crucial step in vetting the aging mobster’s move to Hazelton, according to documents obtained by The New York Times.

Mr. Bulger, 89, terrorized South Boston in the 1970s and ’80s, and was serving two life terms for his role in 11 murders. Just hours after he arrived at the prison, at least two inmates rolled his wheelchair out of view of cameras and pummeled him with a padlock in a sock. At least four Hazelton inmates, including Mr. Geas, have been placed in segregated housing in connection with the murder.

Investigators are trying to figure out the details of why Mr. Bulger was transferred from the Coleman II penitentiary in Sumterville, Fla., to Hazelton, a prison known to be dangerous for informants, and why he was placed in the general population there.

The Bureau of Prisons declined to comment, citing personnel matters and the continuing investigation, and did not make anyone available for an interview.

In an earlier statement, the agency said Mr. Bulger was transferred after threatening a staff member. New details show, though, that Mr. Bulger had a different view, maintaining that the staff member had given him a heart attack by yelling at him.

According to a disciplinary report obtained by The Times, at about 8:45 a.m. on Feb. 23, Mr. Bulger was at the Florida prison’s medical office, complaining of chest pains. After taking his vital signs and completing a cardiac test, the report said, Mr. Bulger was found to be experiencing severe cardiac complications. He was informed that he needed to be transferred to the hospital emergency room.

“You are treating me like a dog,” he said to a female medical worker, according to the report. “You will have your reckoning and will pay for this. I know people and my word is good.” 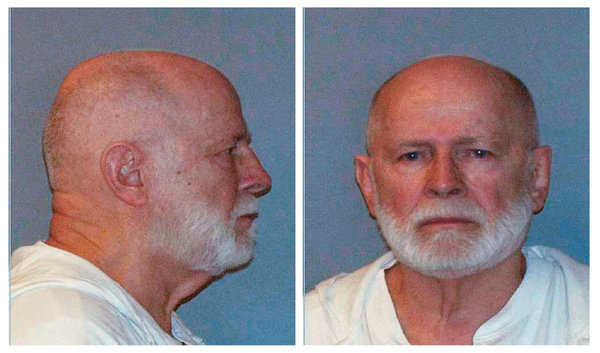 Mr. Bulger disputed this account, according to the report, explaining that he had gone to the medical office to ask for a long-sleeve shirt to wear to visitation and that the medical worker had started arguing with him. He said he went back into the waiting room, but he started feeling ill.

“I knew I was having a heart attack,” Mr. Bulger said in his account, “so I knocked back on the window.” He said he asked for an electrocardiogram and oxygen and, when the medical worker saw the results, she said he needed to go to the hospital.

“I told her I came in for a long-sleeve shirt and she’ll have a day of reckoning and I’ll expose her for giving me a heart attack,” Mr. Bulger said in his account. “She gave me a heart attack due to yelling at me. It was all blown out of proportion. I didn’t threaten her.”

Mr. Bulger was sentenced to 30 days in segregated housing, sometimes called solitary confinement, but he languished there until October while the staff tried to get him transferred to another prison.

“Due to his criminal history, he is clearly able to carry out these threats,” a transfer request said.

At least one transfer request was denied in April. But, in October, the office approved a move for Mr. Bulger, according to documents obtained by The Times.

On Oct. 3, a staff member in the Office of Medical Designations and Transportation, which would generally deal with inmates with health problems or disabilities, wrote in an email to colleagues, “I would like to transfer him to HAZ,” using the abbreviation for Hazelton. She said he had also been cleared to go to three other penitentiaries, Terre Haute in Indiana, Thomson in Illinois and Victorville in California. Terre Haute, like Coleman, is known to be a safe haven of sorts for inmates who might need extra protection, like informants and former gang members.

Two managers, one in Grand Prairie and one in Washington, signed off.

But they failed to consult the Texas office’s internal intelligence group, which would normally have reviewed the move of a high-profile inmate like Mr. Bulger, the official said.

“They skipped a step,” the official said. “They didn’t conduct a thorough review of the inmate.”

The team had examined Mr. Bulger’s file before. In 2014, when he was transferred from a Tucson, Ariz., prison to Coleman, the team blocked a move to a prison in Allenwood, Pa., according to emails obtained by The Times. Coleman was recommended instead because of a lack of inmates with ties to organized crime.

On Oct. 29, Mr. Bulger arrived at Hazelton, a prison with multiple inmates with Mafia connections.

Under Mr. Coakley’s watch, Mr. Bulger would soon be placed in the same unit as Mr. Geas, a mafia hit man from West Springfield, Mass., serving a life sentence for murder.

Mr. Geas, who is suspected of being involved in beating Mr. Bulger to death, appeared to have been relied on by prison staff as a source of information to an unusual degree, the high-ranking official said. He was questioned more than 70 times over the past five years in various investigations, including some in which staff members were trying to confirm that new inmates would be safe at the prison, the official said.

The official said that he thought that prison staff might have been relying on Mr. Geas to help keep the peace in the prison, by controlling his fellow inmates and acting as a so-called shot caller, an inmate who is a sort of group leader in the prison usually for a racial group or gang, with influence and control over other inmates and a working relationship with staff.

It is unclear whether prison staff members tipped Mr. Geas off to Mr. Bulger’s arrival by questioning him ahead of time.

‘Our Country Is Being Run by Children’: Shutdown’s End Brings Relief and Frustration