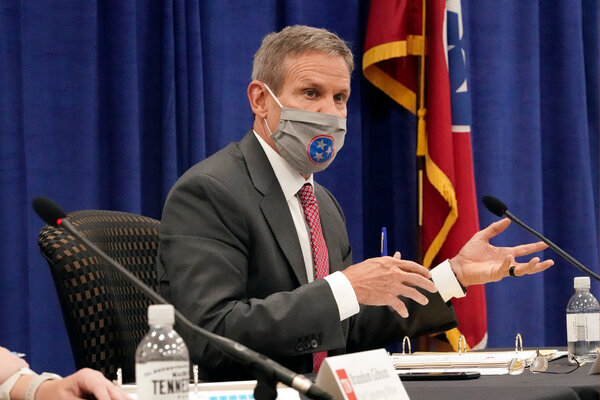 With 12 days to go, the Trump administration on Friday approved a long-held conservative goal: to issue a state’s Medicaid funding as a spending-capped block grant.

The structural experiment in Tennessee, which would become effective once approved by the state legislature, would last for 10 years. Block grants for Medicaid have been a priority for Seema Verma, the administrator for the Centers for Medicare and Medicaid Services and a former consultant who helped states write waiver requests.

“What we tried to do was take some of what we thought were some of the wins, some of the positive things about block grants people have talked about for years,” Ms. Verma said. “And we tried to go through and address some of the criticisms.”

Patient advocates in Tennessee, who fear the new structure would cause poor people to lose access to health care, say they plan a court challenge, and the Biden administration will almost certainly seek to reverse it when it takes over the Department of Health and Human Services.

But in the last week, the Trump administration has tried to slow the reversal of its Medicaid experiments. Traditionally, such waivers are agreements between H.H.S. and states that can be severed with minimal fuss. But Ms. Verma has sent letters to state Medicaid directors, asking them to sign, “as soon as possible,” new contracts that detail more elaborate processes for terminating waivers. Under the contract terms, the federal agency pledges not to end a waiver with less than nine months of notice.

“It’s so blatant,” said Joan Alker, the executive director at the Georgetown Center for Children and Families. “She’s trying to handcuff the Biden administration.”

Ms. Verma said the contracts were a way of ensuring that waivers were revoked only if they were harmful. “We want to make sure that people don’t come into office and on a political whim terminate waivers,” she said.

The waiver allows Tennessee, one of a dozen states that haven’t adopted Medicaid expansion under Obamacare, to abandon the normal structure of the Medicaid program. In that structure, the federal government establishes detailed rules for who must be covered and what benefits they are offered in exchange for an open-ended commitment to pay a share of Medicaid patients’ bills. Tennessee would be given new freedom to alter what services its program covers, but its funding each year would be capped according to a formula.

If Tennessee spends less than the block grant amount, it will be allowed to keep 55 percent of the savings to spend on a broad array of services related to “health.” If it spends more, the difference will need to be made up with state funds. The waiver establishes some limitations on the aspects of the program that can be changed and would allow the spending cap to grow if more people enrolled in Medicaid, as typically happens in an economic downturn.

A key area of flexibility in the waiver relates to prescription drugs. In general, Medicaid must cover a wide variety of medications but is guaranteed to pay the lowest price of any purchaser in the United States. Tennessee will be allowed to renegotiate prices with drugmakers and can decline to cover drugs if it deems the prices too high. Massachusetts had submitted a waiver asking for a similar authority without a broader block grant, and it was denied.

In Tennessee, doctors and hospital groups, among others, have criticized the proposal. “The vast majority of comments C.M.S. received opposed Tennessee’s proposed demonstration,” the approval document noted.

Gov. Bill Lee, a Republican, described the program as a “legacy achievement.”

“We have shown that a partnership is a better model than dependence,” he told reporters.

Waivers have been a centerpiece of Ms. Verma’s tenure at the Medicaid agency. In addition to the Tennessee block grant waiver, she has approved Medicaid work requirements for certain adults in 12 states. Federal courts have repeatedly overturned those waivers, and few of them are in effect.

Michele Johnson, executive director of the Tennessee Justice Center, a legal aid group that helps poor Tennesseans, said she was trying to encourage legislators to reject the waiver. A block grant, which she has always opposed, is a particularly poor match for a public health crisis, she said, in which health spending could accelerate in unusual ways. “The only way this makes sense is in the context of the Trump administration burning everything down on their way out the door,” she said.

She also noted a history of challenges the state has faced running its more traditional Medicaid program. “It’s hard to imagine a state that would be a worse fit for a block grant than ours,” she said.