Weather: Keep an umbrella handy: Rain could get heavy in the afternoon. High in the low to mid-70s. 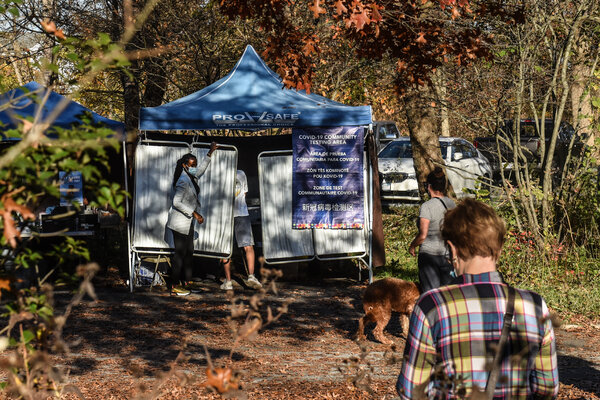 Not long ago, New York City was trying to contain clusters of virus cases in parts of Brooklyn and Queens. Now, health officials have new hot spots on their hands, on Staten Island.

Two neighborhoods on Staten Island have seen the highest seven-day average rates of positive virus test results citywide, according to city data. Tottenville was at 5.74 percent on Tuesday, and Great Kills at 5.04 percent.

Staten Island’s overall rate was above the citywide average, too — 3.38 percent, compared with the city’s 2.31 percent.

And on Tuesday afternoon, the state also released a troubling figure: Its overall positivity rate had risen above 3 percent, if only slightly.

If these figures continue to climb, the city could again shut down some businesses and stop in-person learning at public schools.

I asked my colleague Emma G. Fitzsimmons, the City Hall bureau chief for The Times, specifically about the surges on Staten Island. Here’s an edited version of our conversation:

Q: When did cases begin to spike in Tottenville and Great Kills?

A: Mayor Bill de Blasio first identified Staten Island as an area of concern last week, on Nov. 5. On Tuesday, he ratcheted up the response by holding a “Day of Action,” when dozens of volunteers visited the ferry terminal and shopping centers to ask residents to get tested and to hand out masks.

Do we know what’s causing the increase in infections?

City officials haven’t said what specifically is causing the rise in Staten Island, but they’ve talked about some of the factors citywide. There is some fatigue over the restrictions, and more people are spending time indoors as we get closer to winter weather.

On Tuesday, they said that about 10 percent of cases were linked to travel, 5 percent to large gatherings and 5 percent to congregate-care settings like nursing homes.

For the vast majority of cases, they’re not sure how people were infected, but they reminded New Yorkers to do the simple things we’ve been doing for months: Wear a mask, remain socially distanced, clean your hands and get tested.

What could this mean for the rest of New York City?

The mayor says New York City is getting close to having a full-blown second wave of the virus. If Staten Island and other neighborhoods continue to see a rise in cases, officials could close schools, eliminate indoor dining and return to other harsher restrictions.

The mayor says we can still turn things around, but people have to be more careful. In Staten Island, he’s sent 75 volunteers and staffers to rove around the island to help raise awareness.

United Airlines Will Return to J.F.K. After a Five-Year Absence

A Sick Swan Is Saved After a 23-Mile Odyssey by Foot, Car and Subway

Nxivm’s Leader Is Guilty of Ugly Crimes. These Die-Hards Stand by Him.

Man Arrested Over Threat to Schumer and Vow to ‘Blow Up’ F.B.I.

These Towns Trusted a Doctor to Set Up Covid Testing. Sample Patient Fee: $1,944.

New York City is planning a pilot program in which mental health teams would respond to related 911 calls instead of the police. [Daily News]

The question has lingered around the edges of the pop-culture ascendancy of Alexander Hamilton: Did the 10-dollar founding father, celebrated in the musical “Hamilton” as a “revolutionary manumission abolitionist,” actually own slaves?

Some biographers have gingerly addressed the matter over the years, often in footnotes or passing references. But a new research paper released by the Schuyler Mansion State Historic Site in Albany, N.Y., offers the most ringing case yet.

In the paper, titled “‘As Odious and Immoral a Thing’: Alexander Hamilton’s Hidden History as an Enslaver,” Jessie Serfilippi, a historical interpreter at the mansion, examines letters, account books and other documents. Her conclusion — about Hamilton, and what she suggests is wishful thinking on the part of many of his modern-day admirers — is blunt.

“Not only did Alexander Hamilton enslave people, but his involvement in the institution of slavery was essential to his identity, both personally and professionally,” she writes.

Hamilton married into the powerful Schuyler family in 1780. Slavery was common among New York State’s elite, and the Schuylers were some of the largest slaveholders in their area, with more than 40 people enslaved at the Albany mansion and another estate over the years.

[Read more about the paper, which finds overlooked evidence in letters and Hamilton’s own account books indicating that he bought, sold and personally owned slaves.]

Joanne Freeman, a professor of history at Yale and editor of the Library of America edition of Hamilton’s writings, said that the detailed evidence remained to be fully weighed. But she said the paper was part of a welcome reconsideration of what she called the “Hero Hamilton” narrative.

“It’s fitting that we are reckoning with Hamilton’s status as an enslaver at a time that is driving home how vital it is for white Americans to reckon — seriously reckon — with the structural legacies of slavery in America,” she wrote in an email.

It’s Wednesday — do your research.

I was a stranger in New York City with a few hours to kill on a beautiful spring afternoon. After a stroll around Central Park, I found an empty bench and opened a book.

After a few minutes, a neatly dressed woman who was old enough to be my mother stopped in front me.

“I see you enjoy a good book,” she said. “Do you also enjoy a game of Scrabble?”

I said that I did. She sat down and popped open a portable Scrabble set. The game was on.

We got to know each other as we played. As I expected, she beat me easily in several quick games.

A retired medical researcher, she laid down some of the longest words I had seen in my time playing Scrabble, words with Z’s, X’s and Q’s that ran up her score and that I was helpless to challenge.

After a few hours we parted like old friends. I often think of that charming woman and I smile when I do.