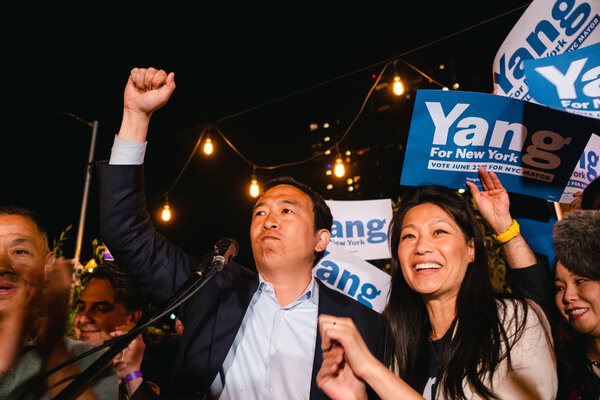 Andrew Yang, a former 2020 presidential candidate whose name recognition once made him an early front-runner in the New York mayor’s race, conceded on Tuesday night after trailing badly in early vote tallies.

Mr. Yang was joined by his wife, Evelyn, and other supporters, and spoke in a somber tone that contrasted with the enthusiasm and energy that marked his campaign. He reflected on his rise from relative obscurity to public prominence in just three years, a transformation that helped galvanize a group of loyal supporters, often via social media, and gave him a platform in the city.

“Our city was in crisis and we believed we could help,” he told supporters gathered at a Manhattan hotel.

But as a self-described “numbers guy,” he said, the outlook for his campaign was bleak.

“I am not going to be mayor of New York City based on the numbers that have come in tonight,” he said. “I am conceding this race, though we’re not sure ultimately who the next mayor is going to be. Whoever that person is, I will be very happy to work with them to help improve the lives of the 8.3 million people who live in our great city, and I encourage other people to do the same.”

Mr. Yang said he believed his supporters had been drawn to a central message of his campaign: that “politics as usual was not working.” He said he also believed that his campaign had influenced the debate over the priorities that will shape the city’s future. Those, he said, included elevating the discussion of cash relief for families, an issue he also promoted in the 2020 presidential race, and the push to reopen schools. He also said he had helped focus attention on a rise in attacks on people of Asian descent.

He praised his ability to draw many small donors and cited his alliance with Kathryn Garcia, a fellow mayoral candidate and former sanitation commissioner, as a positive.

“I thought we could elevate each other and give New York City a better chance of leadership that I was excited about,” he said.

Mr. Yang was frequently challenged during the campaign by other candidates and journalists over what sometimes appeared to be his loose grasp of some aspects of what city government does.

Mr. Yang acknowledged on Tuesday that “there was so much about New York City” that he did not know.

“I sometimes would come home to Evelyn and say, ‘Hey, have you visited this neighborhood, have you been here?’” he said, adding that he and his wife would seek to contribute to “public life in New York City and beyond.”

Representative Ritchie Torres of the Bronx, who had been campaigning with Mr. Yang earlier in the day, said he thought Mr. Yang had run a “bold campaign” that attracted heavy scrutiny from the news media.

“He was a front-runner for six months,” Mr. Torres said.

“If the campaign would have been about ‘change,’” Mr. Torres said, “then Andrew would have won.”