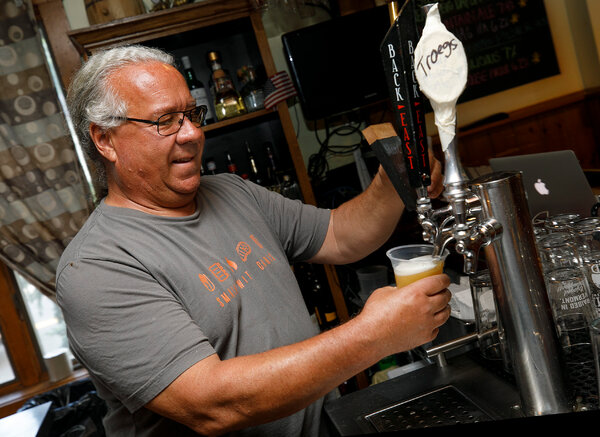 Although the White House recently acknowledged that President Biden did not expect to meet his self-imposed deadline of 70 percent of U.S. adults at least partly vaccinated by July 4, Anheuser-Busch still plans to offer to buy much of the United States a beer.

As the pool of the Americans most eager to get vaccinated has shrunk in recent months, the Biden administration has shifted its focus from prioritizing the benefits of mass vaccination sites to a persuasion campaign that highlights incentives to encourage hesitant or disinterested people to get vaccinated.

In early June, the brewing giant announced that it would offer free beer, contingent on the country reaching the president’s goal by the holiday. On Wednesday, the company said that it is still offering adults a $5 virtual credit card for beverages this weekend, whether or not they had been vaccinated.

Beginning at noon on Friday, and ending on Monday night, U.S. adults of legal drinking age can log on to a company website, provide personal information like their email address and ZIP code, and receive a gift card redeemable for an Anheuser-Busch beverage at bars, restaurants and other retailers.

“As people get back together with friends and family for Independence Day, we are celebrating the progress we’ve made together the best way we know how — over a beer — and are delivering on our promise of beer for America,” Michel Doukeris, the chief executive of Anheuser-Busch, said in a statement.

There are a variety of measures being tried across the United States in hopes that people will get vaccinated, like free rides from Uber or Lyft or free child care, and prizes like state-sponsored lotteries, free tickets for airplanes and sporting events, gift cards, joints, guns and, of course, beer.

“That’s right, get a shot and have a beer,” Mr. Biden said recently, noting the brewer’s move. “Free beer for everyone 21 years and over to celebrate the independence from the virus.”

Still, if the rate of adult vaccinations continues on the seven-day average, as of Wednesday, the country will come in just shy of his target, with about 67 percent of adults having at least one shot by July 4, according to a New York Times analysis.

What’s open and closed in London on Canada Day 2019