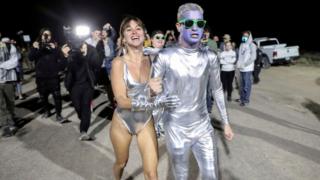 The US military has apologised for a tweet that threatened use of a bomber against “millennials” who tried to break into the secretive Area 51 base.

There were fears thousands could storm Area 51 on Friday after a Facebook event urged people to raid the base.

The deleted tweet – by a PR arm of the US military, DVIDS – showed a photo of a stealth bomber, stating it would be the last thing raiders would see.

The military unit said the tweet “in no way” reflected its stance.

The Nevada base has long been rumoured to house secrets about extraterrestrial life.

Why are people talking about Area 51?

In June, a student from California posted a tongue-in-cheek Facebook event inviting people to charge at the base in large enough numbers to bypass security on 20 September to “see them aliens”. 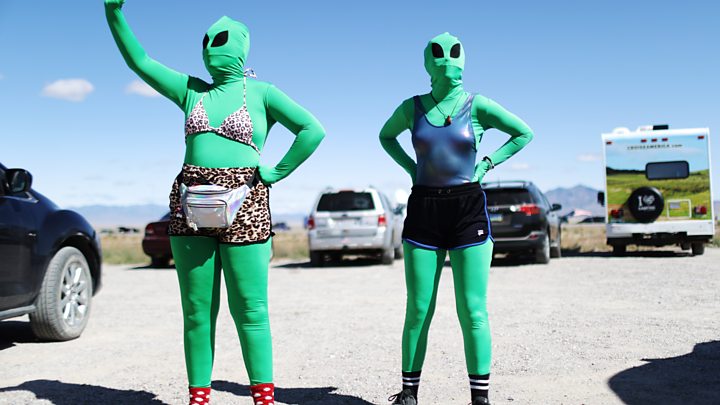 Within days of its launch, the event became a viral sensation, with more than three million people expressing an interest in taking part despite strict rules against trespassing at the site.

However, only several dozen turned up on Friday and just one person was arrested – for urinating near the entrance.

The tweet, posted on Friday on the Twitter account of the Defence Visual Information Distribution Service (DVIDS), stated: “The last thing #Millennials will see if they attempt the #area51raid today” alongside a photo of military men and women standing in front of a B-2 stealth bomber.

On Saturday the unit apologised, tweeting that an employee of its DVIDSHub account posted a tweet that “in NO WAY supports the stance of the Department of Defence. It was inappropriate and we apologise for this mistake.”

Last night a DVIDSHUB employee posted a Tweet that in NO WAY supports the stance of the Department of Defense. It was inappropriate and we apologize for this mistake.

It was created during the Cold War between the US and the Soviet Union as a testing and development facility for aircraft.

The secrecy surrounding the site has helped fuel many conspiracy theories.

Most infamous is the claim that the site hosts an alien spacecraft and the bodies of its pilots after they crashed at Roswell, New Mexico, in 1947. The US government says there were no aliens and the crashed craft was a weather balloon.

The US government did not officially confirm the base existed until 2013.

N.S. House of Assembly to televise all standing committees for increased transparency