When Prime Minister Justin Trudeau announced on Sunday that there would be an early federal election this fall, his speech, like all the party leaders’ campaign launch addresses, began with another subject: the Taliban’s sudden takeover of Afghanistan. 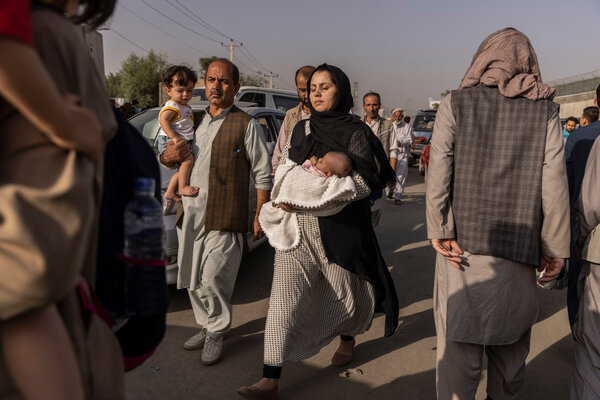 The fall of Kabul may have come more quickly than many expected but it was far from unexpected. Just two days before Mr. Trudeau asked the governor-general to dissolve Parliament to set up the election on Sept. 20, his government said that it would take in 20,000 refugees from Afghanistan.

While the Conservatives’ reluctance to quickly bring Syrians into Canada played a role in the 2015 campaign, there’s no partisan spin to it this time around. During the first week of campaigning, all of the major party leaders said they supported the effort and promised to continue to do so if they were to dislodge Mr. Trudeau from power.

Everyone I spoke with in the refugee assistance community expects that, as we saw with the Syrian newcomers, large numbers of Canadians will come together to privately sponsor many of the Afghan refugees.

Catherine Rodd, a spokeswoman for the United Church of Canada, said that even without being asked, about 60 of its congregations have indicated that they want to privately sponsor Afghan refugees. Private sponsorships through that church brought in thousands of Syrians.

But before anyone starts preparing apartments and making school arrangements, the Afghans, whose lives may be in danger, still need to get out of Afghanistan. On Friday afternoon, Marco Mendicino, the immigration minister, said that two massive Royal Canadian Air Force transport planes were in the midst of airlifting refugees from Kabul.

The rapidly evolving situation in Afghanistan makes it unclear how many such flights will be possible, although Mr. Mendicino said that the government was committed to keeping “those flights going for as long as possible.”(You can find The Times’s coverage of Afghanistan, including a live briefing, here.)

Janet Dench, the executive director of the Canadian Council for Refugees, summed up her meeting this week with government officials about bringing in refugees from Afghanistan when she said: “They haven’t yet made a lot of the sort of fairly basic decisions about it.”

And there’s a long list of decisions to be made. Right now, Ms. Dench said, no one knows whether the 20,000 refugees will be people who are currently fleeing or those who have already escaped Afghanistan but are stuck in refugee camps elsewhere. Trudeau’s government must decide if it will follow the Syrian precedent of waiving various rules around documents. Also unclear is whether the government will accept only people referred to it by the United Nations High Commissioner for Refugees, a potentially time-consuming process, or if they will try other channels and perhaps focus on people with some sort of link to Canada.

Above all, no one has yet said how many of the 20,000 refugees will be privately sponsored rather than resettled by the government.

Ms. Dench said it was likely that there would again be a role for private sponsors. But she and others cautioned that unless policies change, those sponsors will face a heavier bureaucratic burden this time around, including “explaining exactly what they have in place for people that are arriving.”

The result, she said, is that some sponsors may hesitate to commit again out of fear that they will be “just overwhelmed by the government demanding all kinds of paperwork and justifications that it hasn’t in the past.”

In Quebec, which has unique powers over immigration, it looks as though private sponsors will play no role at all. Flore Bouchon, the press secretary of the minister of immigration and international relations, said the province temporarily suspended private sponsorships by organizations, and that the deadline has passed for this year for applications from groups of two to five people. She said that the province was committed to receiving Afghans but they “will be government-assisted.”

Understand the Taliban Takeover in Afghanistan

Who are the Taliban? The Taliban arose in 1994 amid the turmoil that came after the withdrawal of Soviet forces from Afghanistan in 1989. They used brutal public punishments, including floggings, amputations and mass executions, to enforce their rules. Here’s more on their origin story and their record as rulers.

Who are the Taliban leaders? These are the top leaders of the Taliban, men who have spent years on the run, in hiding, in jail and dodging American drones. Little is known about them or how they plan to govern, including whether they will be as tolerant as they claim to be.

How did the Taliban gain control? See how the Taliban retook power in Afghanistan in a few months, and read about how their strategy enabled them to do so.

What happens to the women of Afghanistan? The last time the Taliban were in power, they barred women and girls from taking most jobs or going to school. Afghan women have made many gains since the Taliban were toppled, but now they fear that ground may be lost. Taliban officials are trying to reassure women that things will be different, but there are signs that, at least in some areas, they have begun to reimpose the old order.

What does their victory mean for terrorist groups? The United States invaded Afghanistan 20 years ago in response to terrorism, and many worry that Al Qaeda and other radical groups will again find safe haven there.

Another issue is also at play. Karen Cocq, the campaign coordinator at the Migrant Workers Alliance for Change, told me that already there are Afghans whose refugee claims have been refused or whose immigration status is not properly documented for other reasons. In most cases, she said, those people appear to have a legitimate claim but were rejected for arbitrary reasons, often involving paperwork. The current crisis, Ms. Cocq said, means that it is now necessary to find a way for them to remain in Canada.

“Arbitrary administrative requirements and processing requirements don’t adequately recognize the conditions that people find themselves in and the realities of people who are fleeing conflict and violence,” she said.

Canada, of course, played a major role in NATO’s 20-year war against the Taliban and in rebuilding Afghanistan, an effort that now appears to have been washed away. Its cost was terrible. Of the 40,000 members of the military who served in Afghanistan from 2011 to 2014, 158 Canadian Armed Forces members died. Other Canadian deaths included seven civilians — among them a diplomat — four aid workers, a government contractor and a journalist. Thousands of soldiers returned home with physical and mental injuries, and many of them are still recovering.

Roger Cohen, a former Opinion columnist for The Times who has rejoined the news side, has written a thoughtful analysis on how and why the mission went so wrong.

[Read: For America, and Afghanistan, the Post-9/11 Era Ends Painfully]

Afghanistan is not the only humanitarian crisis of concern to Canadians. For the second time in just over a decade, and not long after a presidential assassination threw the country into often violent political turmoil, a major earthquake struck Haiti. Then a severe tropical storm came along. We’ve prepared an overview of the situation, and you can find links to our coverage from there.

The “doo-doo-doo” of Montreal’s Metro, the three-note ditty of Vancouver’s SkyTrain and the Toronto Transit Commission’s “calming downward arpeggio” all appear in a fun multimedia feature on the melodies used by subways around the world to warn about imminently closing doors.

In a guest essay for Opinion, Shikha Dalmia, a visiting fellow at the Mercatus Center at George Mason University, writes that Canada can show the United States a path out of demographic decline.

Bill Davis, who famously praised blandness while he reshaped Ontario as its long serving premier, has died at the age of 92.

The International Real Estate feature takes a look at a sprawling log house near Calgary.

Homeless Men Moved Into a Tourist Hotel. What Followed Was Unexpected.