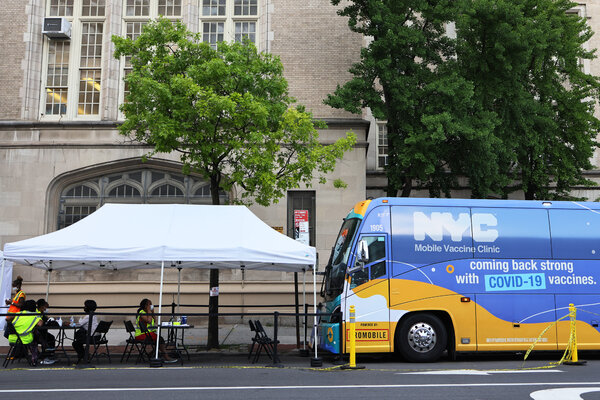 Fueled by the Delta variant, daily coronavirus case counts in New York City have begun climbing in recent days, even as the city seems determined to turn the page on the pandemic.

Just a few weeks ago, there were only 200 new cases a day across the city on average, the lowest level since the early days of the pandemic. But the city has now had a streak of days with 400 or more cases. And the test positivity rate has doubled: from below 0.6 percent on average to about 1.3 percent.

Those numbers are still low, but the increase has been swift, surprising some epidemiologists and public health officials who had not expected to see cases jump so quickly after remaining level throughout June.

Still, with some 64 percent of adults in the city fully vaccinated, epidemiologists said it was unlikely that the Delta variant would create conditions anywhere near as devastating as the past two waves of Covid-19.

Officials and experts are concerned

“Alarming is not the right word” to describe the recent uptick in cases, said Denis Nash, an epidemiologist at the CUNY Graduate School of Public Health and Health Policy. “I would say concerning.”

The Delta variant is far more contagious than the original form of the virus that swept across the city in March 2020. It is also more contagious than even the highly transmissible B.1.1.7 variant (which was first detected in Britain and since has been renamed Alpha) that edged out other variants during the city’s long second wave.

The Delta variant was detected in a few cases in New York City in February during the second wave, but really made inroads over the past two months, when there was relatively little virus circulating in the city. By the end of May, it accounted for about 8 percent of the cases sequenced by the city, and by mid-June, more than 40 percent. Yet throughout June, the number of infections stayed low, at about 200 cases a day.

Given how contagious the Delta variant is, experts are not surprised that case counts eventually started climbing. Countries around the world are experiencing a surge as a result of Delta. In the United Kingdom, with a vaccination rate that surpasses that of the United States, cases have soared, but hospitalizations have risen more slowly.

“The metrics to keep a close eye on are hospitalizations and deaths,” said Dr. Wafaa El-Sadr, a professor of epidemiology at Columbia University.

So far, those metrics have remained stable in New York City. The seven-day average number of daily hospitalizations this week has remained under 20. The city has recently seen four or five Covid-related deaths a day on average.

The hope, if not expectation, had been that the summertime would be a time of few cases. Case counts stayed low in New York last summer as the city emerged from a devastating first wave. That did not change until September, when rising transmission in a few spots in Brooklyn and Queens preceded a citywide increase in cases that eventually became a second wave that lasted until spring.

In interviews in recent weeks, some epidemiologists said they were expecting a calm summer followed by an uptick of cases around the time students returned to school and Manhattan office workers migrated back to the office.