WAVERLY, Tenn. — Joseph Prasnikar cannot escape the haunting memory of the last time he saw his wife alive: They were at home, clutched in each other’s arms, as rising water swirled around them. He slipped below the surface. When he climbed back up, she was gone.

The image seared in his mind is vivid and horrifying. He fears it will overpower his memory of the affection and simple comfort that defined the 17 years they had together.

Now, days after powerful floods descended on his Middle Tennessee community, Mr. Prasnikar is putting every ounce of effort into preserving his memories of his wife, Hallie Gerber, and the qualities that make losing her so agonizing: her persistent kindness, her zeal in caring for him as he navigated a litany of health problems. He already misses walking their dogs with her, both of which were also lost in the floods. 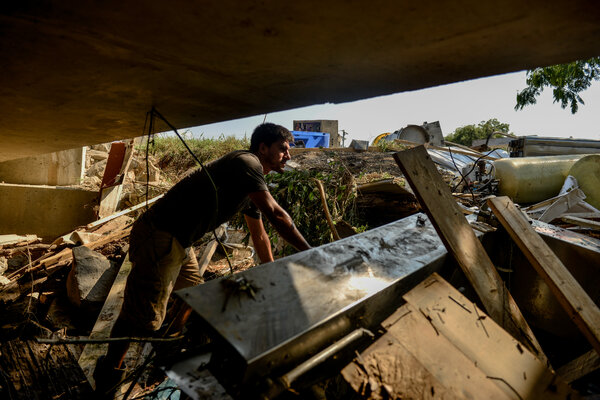 “Just that connectedness,” he said, describing their bond, “that presence for each other that most people don’t know exists.”

Ms. Gerber, 60, was one of 20 people killed last weekend as flash floods tore through communities tucked into the rolling Tennessee woods.

Even though the water has receded, residents remain gripped by excruciating grief, their minds etched with the terror of watching loved ones swept away by torrents that seemed to arrive out of nowhere.

Officials said on Wednesday that all of those missing in the aftermath of the storm have been accounted for. “We are sad that our count is now at 20,” Grant Gillespie, the police chief in Waverly, said. “Our families now have the closure that they need to move on.”

The dead include 7-month-old twins, Rileigh and Ryan Rigney, who were happiest when they were with each other, and Joe Reeves, a U.S. Army veteran who often stopped to help strangers fix a flat tire and, in his last moments, sacrificed his own well-being to help his wife and one of his daughters escape.

“He passed away saving their lives,” an older daughter, Rachel Reeves, 29, said. “My dad was a hero.”

The stories of those who died illustrate what had tied residents to the region but also what will make it so challenging to rebound. In the area’s small communities, nearly everyone was connected to someone who was killed or whose life was otherwise upended.

The collection of small towns connected by two-lane highways winding through woods and farmland is only about 90 minutes west of Nashville, but in some ways it feels farther.

In Waverly, a city of 4,100 that saw some of the worst destruction, modest family homes were clustered together on narrow streets, close enough that neighbors could hold conversations from their front porches. But after the storm sent water surging in from nearby creeks, that proximity only added to residents’ sense of helplessness and grief.

Regenia Lynn Brake, who died after being swept away by the water, lived in a public housing complex of small, spare duplexes in the center of Waverly. She had five children. She wanted to keep them together, and she wanted them to have a home.

Her children described the energy she put into transforming the space into something that was warm and appealing. A few weeks ago, she redecorated her bathroom, inspired by videos of homes designed in the farmhouse style that she liked.

“These are called the projects, but Mama’s house was not,” said Kayla Brake, Ms. Brake’s oldest daughter. “It looked like a home in here. They had concrete walls and everybody used to say, ‘You can’t even hang anything on the walls in there.’” Her mother solved that problem by buying a drill.

At one point, Ms. Brake, 53, worked four jobs — a paper route and positions at a day care center, a grocery store and FedEx. But she wanted her children to be insulated from whatever struggles she faced, and instead was worried most about their concerns. When Kayla was depressed at 18, she slept in her mother’s bed for months for comfort.

Donna Gail Bradley, 61, had always feared the water. Her sister, Deanna Hensley, remembered that when they were younger she would never swim alone or venture in too deep.

Ms. Bradley was trapped in the floodwaters that engulfed her home in Waverly. “Her fear in life was drowning,” Ms. Hensley said. “That’s the hardest thing I’m trying to get past.”

A disabled woman with multiple health issues, Ms. Bradley had been waiting for someone to rescue her. She did not have a car, had trouble breathing and had one arm in a sling because of an injured shoulder, all of which made it difficult for her to flee.

Her body was found on Monday about one mile from her home.

Ms. Bradley, who had three children, was known for her cooking, especially her barbecued venison. “She had a secret recipe,” Ms. Hensley said. “It would melt in your mouth.”

Joe Reeves, 58, and his wife, Angela Reeves, had moved to Waverly just two weeks ago. They told people they had found their dream house, with new floors and a spacious porch. “He was so proud to have got the house for my mom,” his daughter Rachel said.

Born in Paducah, Ky., Mr. Reeves was raised in Missouri and enlisted in the military after high school. He was stationed in Germany when the Berlin Wall fell. He and Angela met at church and married about two decades ago. He bought her Vera Bradley handbags and jewelry. When she was diagnosed with colon cancer this year, he regularly took her to chemotherapy treatments. “They were so in love,” their daughter said. “He was so strong for her.”

Mr. Reeves, who had worked at a printing factory, had a passion for coins and fishing largemouth bass. He was a church deacon and sang baritone in a church trio along with his wife.

“God, family, country — that’s how you would explain my dad,” Ms. Reeves said.

On a recent afternoon, Mr. Prasnikar, 53, went to the high school that has become a relief hub so he could start the process of rebuilding his life. First, he had to get a new driver’s license.

As he sat in an empty classroom, Mr. Prasnikar said that he and Ms. Gerber were not legally married, but they had assembled some friends and relatives for a small commitment ceremony. He appreciated the rhythms they had developed: He set up the coffee machine at night. She made him a cup of coffee in the morning. When his spirits ebbed, she would help lift them up.

His gratitude for surviving was overshadowed by grief. “I’m bereft,” he said. “I’m broken right now.”

At a funeral home in Nashville on Wednesday afternoon, a single small coffin was surrounded by flowers. Rileigh and Ryan Rigney always wanted to be with each other, so it made sense that the twins would be buried together.

During a service on Wednesday, the family showed photographs of their brief lives: their days in the newborn intensive care unit at the hospital, their arrival at home. In one picture, Ryan — or Bubba, as his family called him — gave Rileigh a kiss, which made her smile. “I won’t forget the way she giggled if you kissed just under her cheeks and by her neck,” Danielle Hall, their mother, said.

“Even though it’s killing me that I lost two babies,” she said, “I know that at least they were together.”

The family of Lilly Bryant, 15, had been tormented by uncertainty for days. She had been missing since Saturday when the makeshift wooden raft she and her sister were clinging to hit a tree and split in two, separating them.

Lilly was supposed to be starting her freshman year of high school. She loved to dance and had a nurturing soul, always playing with younger cousins and other children in Waverly, her family said.

Out-of-town relatives, neighbors and even strangers had helped search for the girl. On Wednesday, her body was found.

“Lilly has been of great concern to everyone,” Chief Gillespie said. “I’m glad that we could find her and give closure today.”

US school warned of ‘repeat Columbine’