MINNEAPOLIS — Two days after the streets of Minneapolis were filled with people celebrating the conviction of a police officer for the murder of George Floyd, the city returned to a period of mourning on Thursday for another Black man killed by a police officer.

Packed into a church for the funeral of Daunte Wright were politicians, faith leaders and relatives of other people killed by the police, including the boyfriend of Breonna Taylor and the families of Philando Castile and Oscar Grant. Many had come from across the country to pay respects to Mr. Wright, the 20-year-old man who was fatally shot by an officer in the Minneapolis suburb of Brooklyn Center last week during a traffic stop.

Also in attendance were relatives of Emmett Till, the 14-year-old Black boy who was lynched in Mississippi in 1955 and whose cousin recently met with Philonise Floyd, one of Mr. Floyd’s brothers. After Derek Chauvin, the former Minneapolis police officer who knelt on Mr. Floyd’s neck for more than nine minutes, was found guilty of murder on Tuesday, Philonise Floyd said he had thought of both Mr. Wright and Emmett Till, whom he called “the first George Floyd.” 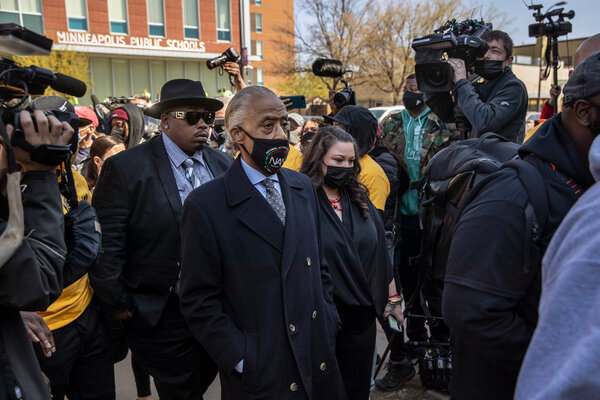 On Thursday, the Rev. Al Sharpton delivered the eulogy for Mr. Wright to a grieving family and city. He said he was told that Minneapolis had not seen a funeral procession so large since Prince, the musician who was born and raised in Minneapolis, had died in 2016.

“Well, we came to bury the prince of Brooklyn Center,” Mr. Sharpton said, standing before a white coffin that was covered in red roses. “We come from all over the country because you hurt one of our princes.”

Mr. Wright was killed during a traffic stop for an expired registration, during which a police officer also noted the air freshener hanging from his rearview mirror as an additional violation. His death, during the Chauvin trial, set off a wave of protests in Brooklyn Center that lasted for more than a week.

“You thought he was just some kid with an air freshener,” Mr. Sharpton said. “He was a prince, and all of Minneapolis has stopped today to honor the prince of Brooklyn Center.”

Through tears, Mr. Wright’s parents remembered him at the service as a loving son, a class clown and a new father, whose child, Daunte Jr., is not even 2 years old.

“He always said he couldn’t wait to make his son proud,” said Katie Wright, Mr. Wright’s mother. “Junior was the joy of his life, and he lived for him every single day, and now he’s not going to be able to see him.”

Gov. Tim Walz and Senator Amy Klobuchar of Minnesota each gave their condolences to the Wright family at the service, and Representative Ilhan Omar presented his parents with a flag that she said had flown over the U.S. Capitol in his memory.

Ben Crump, a lawyer for the families of Mr. Wright and Mr. Floyd, said the families would “walk hand in hand” until Mr. Wright’s family got justice, and he called on Keith Ellison, the Minnesota attorney general whose office prosecuted Mr. Chauvin and who was seated at the front of the church, to “allow us to get full justice in the court of law.”

Kimberly Potter, the white officer who shot Mr. Wright, resigned from the Police Department and was charged with second-degree manslaughter. The authorities have said that she thought she was using her Taser when she shot a bullet into Mr. Wright’s chest, and body camera video showed that she shouted “Taser” several times before firing her gun. Mr. Wright had pulled away from police officers and gotten back into his car after they tried to arrest him on a warrant for missing a court appearance regarding a misdemeanor gun charge.

The funeral service on Thursday was a sharp reminder that the toll of police violence has endured during and since the trial of Mr. Chauvin. An average of roughly three people a day were killed by the police during the trial, and, just minutes before the verdict was read, an officer in Columbus, Ohio, shot and killed a teenage girl who was lunging toward another girl with a knife, setting off more protests.

Outside of Shiloh Temple International Ministries before the funeral on Thursday, Diamond Hurd, a friend of Mr. Wright’s, smiled as she stood in the sun and recalled how Mr. Wright had asked for her phone number from her mother when they first met in a gas station years ago.

“He was a really good father to his son and he loved his son so much,” she said.

From across the street, Brianna Patterson and a friend watched people file into the church and thought about their own children and how to keep them safe from the police.

The Jeffrey Epstein case could involve a ‘well-known prime minister.’ Here’s what we know