Home » Americas » Attacks Against Asian New Yorkers: What to Know

Weather: Another nice day: Plenty of sun, and a high in the mid-60s. 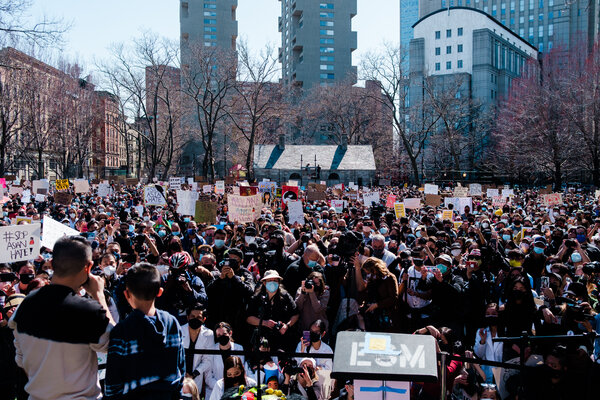 Carrying signs that read “Racism is a virus” and “Stop Asian Hate,” hundreds of people gathered in New York City last weekend to protest a yearlong surge of attacks and hate crimes against Asian-Americans.

Yet the violence continued.

At least five people of Asian descent were attacked in the city over the weekend. On Sunday alone, three people were attacked, including one woman who had attended a demonstration in support of Asian-American victims that day.

[The assaults are part of a new wave of xenophobia that emerged during the pandemic.]

On Friday, a 68-year-old Sri Lankan man was riding the subway in Lower Manhattan when another passenger yelled a racial slur at him and punched him in the head, the police said. He was taken to a hospital in critical condition.

Katie Hou, 37, who is Chinese-American, said a man punched her twice in the face after she left a rally in Union Square with her 7-year-old daughter. Later that day, a 41-year-old woman was thrown to the ground in Midtown, and a 54-year-old woman on the Lower East Side was struck in the face with a metal pipe, the police said.

The authorities said that least four of the attacks were being investigated as hate crimes.

“People need to be vigilant about their safety, but at the same time, we need to do something to stop this from happening again,” Ms. Hou told my colleague Mihir Zaveri.

Over the last year, nearly 3,800 hate incidents have been reported against Asian-Americans and Pacific Islanders nationwide, according to Stop AAPI Hate, an anti-discrimination group.

The New York Police Department recorded 29 attacks against people of Asian descent last year. Investigators said they believed that 25 of the incidents stemmed from anti-Asian sentiment and the perception that the victim was carrying the coronavirus, according to police statistics.

Many of the city’s mayoral candidates have participated in news conferences and rallies to support local Asian communities. Among them is Andrew Yang, who would become the first Asian-American mayor in the city’s history.

“We have to start building bonds of connection with the Asian-American community to let them know that this city is theirs, this city is ours,” Mr. Yang said at a rally on Sunday.

Community leaders say that security and bias are among the most urgent issues facing Asian-Americans. On Monday, Mayor Bill de Blasio said the city would amp up the police presence in Asian communities.

Mayor Ends Remote Work for 80,000 in Signal to Rest of New York City

New Yorkers 50 and Older are Eligible for Vaccination on Tuesday

Prosecutors said the co-owner of Nature’s Grill, a Brooklyn-based restaurant chain, was involved in a drug ring. [Brooklyn Paper]

The white headmaster of a Long Island Catholic school was placed on temporary leave after reports that he told a Black student to kneel to a teacher to apologize. [NBC]

A Rise in Attacks Against Asian-Americans