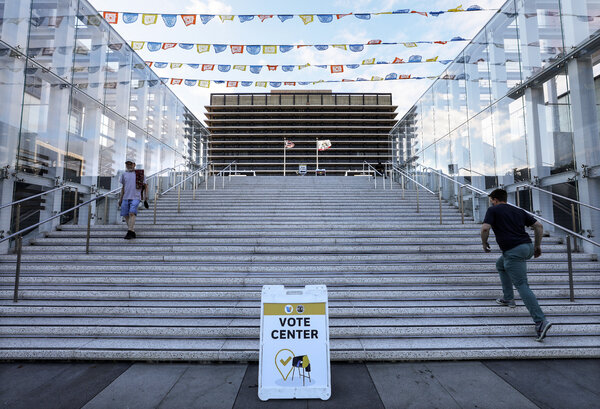 In some ways, California and its concerns have been more visible than ever in this presidential election.

Its junior senator, Kamala Harris, is the first Democrat from California to run on a major-party presidential ticket, and the first Californian of any party in years to appear on the ballot nationally.

The enormity of the wildfires this year has forced many Americans to reckon with the realities of climate change, and the issue has taken center stage during the presidential debates. Gov. Gavin Newsom has positioned himself as a kind of climate change truth-teller in contrast with the president, with whom he’s sparred over the causes of the blazes that have hammered the state, the nation’s most populous.

[See The Times’s full voter guide for Californians, with information about how, when and where to cast your ballot. | Leer en español.]

But, ultimately, the presidential election is likely to serve more as a lure to the polls for many Californians, who have voted early in record-breaking numbers; they’ll have much more say in a dozen statewide ballot measures and local contests — including congressional races.

In some House districts, Republicans are fighting to retake seats lost in the so-called blue wave of Democratic wins in 2018, particularly in previously long-held Republican strongholds, like in Orange County. Several of this year’s races are expected to be tight, and they’ll test the durability of those shifts.

Key ballot propositions, which have been the subjects of some of the most expensive campaigns in the country, will serve as barometers for how Californians really feel about broad, important questions, like what kind of influence big companies should have on labor law, and how to build widespread support for addressing systemic racism into policy.

The results could influence similar debates as they play out nationwide — and the divides don’t fall along neat partisan lines.

Today, we’re starting with a quick refresher on the highest-profile statewide ballot measures, and later this week, we’ll take a look at some of the congressional races worth watching.

Here are the propositions to know:

Proposition 15: It may sound obscure, but whether to change how some commercial property taxes are assessed is actually one of the most controversial questions facing California voters. That’s because Proposition 15, if passed, would amend rules dictated by the 1978 ballot measure that many call a third rail in California politics. That measure, Proposition 13, effectively capped property taxes and set California on its current path.

Proponents say a move to create a so-called split roll, or creating a separate tax assessment for commercial properties, would really be like closing an unfair loophole for businesses, who have long benefited from artificially low property taxes, while local governments and school districts have been starved of the funding they need to provide adequate services.

Opponents say it would raise taxes in the midst of an economic crisis, when businesses can’t afford the increase.

Read more from the state voter guide and The Los Angeles Times.

Proposition 16: The thing about California’s ballot propositions is that many of them are efforts to undo the work of past measures. (See Proposition 15, above.) Proposition 16, which state lawmakers voted to put on the ballot, falls squarely in that category.

In 1996, California voters enacted a ban on using race, gender or ethnicity in university admissions or in public contracting. Proposition 16 would, in a year that has been defined by reckonings over racial inequity in all facets of American life, reverse that ban.

Proponents include state lawmakers and leaders of California’s prestigious public universities, who say that data shows the ban has helped keep historically underserved groups, like Black, Latino and Indigenous Californians, from getting equitable access to education and work.

Opponents say that giving preferential treatment to any group in allocating resources is nothing more than discrimination by another name.

Read more about why, even in an era of widespread protest against racism, Proposition 16 is complicated.

Proposition 22: When California legislators passed a landmark law late last year that would require gig work companies to treat workers as employees rather than independent contractors, it tipped off an intense and really, really expensive battle over the future of work. The law was meant to give a rapidly growing work force benefits and protections afforded to full-time employees.

But gig work companies like Uber and Lyft said their drivers preferred the freedom and flexibility of being considered contractors. And so, they put Proposition 22, which would exempt them from many of the new law’s provisions, on the ballot before voters and have spent roughly $200 million to persuade voters to support it. They say prices for their services may rise and be harder to come by.

Opponents, including major labor groups, say that if Proposition 22 passes, it would not only leave workers vulnerable, but it could also demonstrate that big companies can spend their way out of rules. The fight has become a kind of prelude for looming federal-level debates over how to regulate app-based work.

Read more about why Proposition 22 is unique and why it’s important.

Read about all the propositions, including who’s putting money behind which side. [CalMatters | The Los Angeles Times | SFGate | KQED | Official voter information guide]

If you missed it, here’s why one expert described California’s ballot initiatives as “the second most expensive political exercise in the free world.” [The New York Times]

See where donors to each campaign come from. (Spoiler: California isn’t all blue, but you’re likely to notice patterns.) [The New York Times]

If you’re a first-time voter, tell us about the experience. Where did you vote? What were your biggest concerns? What were the challenges? Please email us at [email protected].

The Silverado Fire, which erupted in the canyon areas in the eastern part of Orange County, grew rapidly on Monday morning, threatening homes, prompting thousands to evacuate, injuring firefighters and forcing road closures. It came as fierce winds across the state created dangerous conditions, ripe for new blazes. [The New York Times]

The coronavirus is resurgent. Colleges and universities are being forced to make tough cuts, big and small. [The New York Times]

In Los Angeles, the chef Rashida Holmes is growing her business to meet demand for West Indian food. Eat the roti while it’s hot. [The New York Times]

The Dodgers are set to play the Rays again this evening. Here’s the game preview. [The New York Times]

Rep. Max Rose Is Defeated in a N.Y. House Victory for Republicans