The attorney general had requested Geoffrey Berman step down on Friday, but he refused. 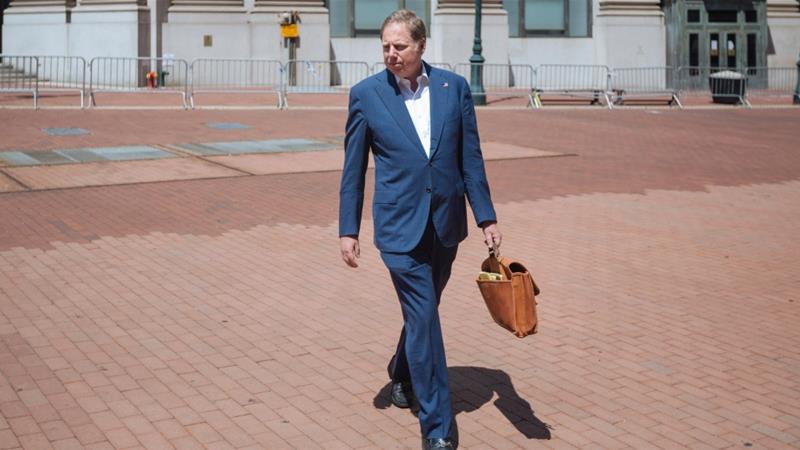 US Attorney General William Barr has said that President Donald Trump fired Geoffrey Berman, the top federal prosecutor in Manhattan who has been overseeing an investigation into his personal lawyer Rudolph Giuliani.

The announcement comes after Berman publicly refused late on Friday to step down from his post.

In a letter to Berman, Barr said on Saturday he was “surprised and quite disappointed” by Berman’s late-night public statement in which he refused to quit his job, saying Berman had made a “public spectacle over public service”.

“I have asked the President to remove you as of today, and he has done so,” Barr said, adding that the Deputy US Attorney Audrey Strauss for the Southern District of New York, will become the acting United States attorney until a permanent replacement is installed.

The post is considered one of the most prominent for federal prosecutors in the country.

Berman had shown up to work at his office on Saturday, hours after Barr had unexpectedly announced that he was stepping down. Replying to that announcement, Berman had said he had no intention of leaving the post until the Senate confirms his successor.

‘Potential corruption of the legal process’

The imbroglio sets up an extraordinary political and constitutional clash between the Justice Department and one of the nation’s top districts, which has tried major political cases over the years and is currently investigating Trump’s personal lawyer Giuliani’s international business dealings.

Giuliani served as an unofficial envoy to Ukraine for Trump, and his dealings were at the heart of impeachment proceedings against the president, who was later acquitted.

The move is also set to deepen tensions between the department and congressional Democrats who have accused Barr of politicising the agency and acting more like Trump’s personal lawyer than the country’s chief law enforcement officer.

Meanwhile, the White House has announced that Trump is nominating Securities and Exchange Commission Chairman Jay Clayton, a well-connected Wall Street lawyer has virtually no experience as a federal prosecutor, for the job.

The chairman of the Senate Judiciary Committee, Senator Lindsey Graham, a Republican and Trump ally, said he was unlikely to proceed with Clayton’s nomination unless New York Senators Chuck Schumer and Kirsten Gillibrand, both Democrats, gave their consent to the pick.

Schumer has said the bid to remove Berman “reeks of potential corruption of the legal process”, while Gillibrand said she would “not be complicit” in helping to fire a prosecutor investigating corruption.

Both lawmakers called for Clayton to withdraw from consideration.

The chairman of the House Judiciary Committee, Jerry Nadler, said before Berman’s firing that the committee would invite him to testify this coming week.

The federal prosecutor’s office in New York has recently prosecuted a number of Trump associates, including president’s former personal lawyer and fixer Michael Cohen, who served a prison sentence for lying to Congress and campaign finance crimes.

Berman oversaw the prosecution of two Florida businessmen, Lev Parnas and Igor Fruman, who were associates of Giuliani and tied to the Ukraine impeachment investigation. The men were charged in October with federal campaign finance violations, including hiding the origin of a $325,000 donation to a group supporting Trump’s re-election.

Attention refocused on the office this past week after news organisations obtained copies of former National Security Advisor John Bolton’s tell-all book, in which he alleges that Trump sought to cut a deal to stop federal prosecutors in New York from investigating whether Halkbank violated US sanctions against Iran in order to free an American pastor imprisoned in Turkey.

Covid-19 forces some US schools to close, as new cases remain high in most states