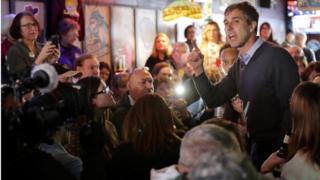 In his first day of campaigning as a presidential candidate, Texas Democrat Beto O’Rourke raised $6.1m (£4.6m), the largest of any 2020 candidate so far.

Like other Democrats, Mr O’Rourke has refused to take any money from special interest lobby groups or corporations.

The 46-year-old is one of 15 Democrats now in a bid for the White House.

According to his campaign, he received donations from every state and territory, totalling $6,136,763. The campaign did not release how many donors contributed.

In a statement, Mr O’Rourke said: “In just 24 hours, Americans across this country came together to prove that it is possible to run a true grassroots campaign for president.”

While Mr O’Rourke ultimately lost his tight race against Mr Cruz, he demonstrated an ability to run a successful campaign and drew comparisons with former President Barack Obama.

Speaking to reporters on Saturday, Mr O’Rourke said he had no “large-dollar fundraisers planned” and was ruling out “taking any PAC [Political Action Committee] money or any lobbyist money ever”.

Mr O’Rourke’s fundraising figure comes on the heels of his three-day campaign tour road trip across Iowa, the state that will hold the first US presidential caucus.

He will be campaigning in Michigan, Ohio and Pennsylvania this week.

A big target on the Texan

That was in a race against a Republican candidate, Ted Cruz, who was intensely disliked by the Democratic base, however.

Now that the Texan is a presidential candidate, could he replicate his success when his competition is a diverse field of like-minded opponents?

If the early results are any indication, the answer is a resounding yes.

The Texan’s $6.1m mark in 24 hours put him ahead of even Bernie Sanders, whose small-donor fundraising prowess was thought to be unrivalled.

It remains to be seen whether Mr O’Rourke’s pace can be sustained.

What is certain, however, is that this eye-popping number will put a big target on the Texan’s back. Even if current polls don’t show him as a front-runner, his opponents are going to treat him as such.

Other candidates are already taking veiled swipes at him, and their supporters and surrogates are pointing out his thin resume and sometimes chequered past.

This is just the beginning.

The 2020 Democratic field is a crowded one, with over a dozen lawmakers vying for the presidential nomination, including senators Elizabeth Warren, Bernie Sanders, Kamala Harris and Amy Klobuchar and governors John Hickenlooper and Jay Inslee.

Mr O’Rourke and Mr Sanders have led the group thus far in terms of fundraising.

US dollars raised on first day (in millions)

Figures released by campaigns not confirmed by election officials

Ms Harris raised $1.5m online in the first 24 hours of her campaign, while Ms Klobuchar reported $1m in the first two days. Mr Hickenlooper and Mr Inslee have also raised over $1m within days, US media reported.

Candidates will officially report their fundraising totals for the first quarter to the Federal Election Commission on 15 April.

If Beto O’Rourke’s campaign success continues, he may keep Donald Trump from being re-elected. But who else has a shot at becoming the next president?

Find out who else is running and who might join them.

The Vaccine Had to Be Used. He Used It. He Was Fired.