Betty Campbell-Adams, who with her husband — and the help of his Caribbean grandmother’s secret carrot cake recipe — founded Lloyd’s Carrot Cake, a Bronx institution that has become internationally renowned for its New York delicacy, died on Dec. 11 in Mount Vernon, N.Y. She was 65.

Her son, Brandon Lloyd Adams, said doctors believed the cause was a heart attack.

The story of Lloyd’s Carrot Cake, which occupies a little storefront in Riverdale that emits wafts of ambrosial aromas, is a tale of humble beginnings, lots of cinnamon and butter, and family and heartbreak. Ms. Campbell-Adams, who took over the business and expanded it after her husband died in 2007, was the entrepreneurial force and personality who ensured the cake’s legacy as a sweet New York staple known to fans around the world.

“People are always anxious to tell you how far they’ve come to get this cake, who told them about Lloyd’s Carrot Cake and where they’re taking it to,” she told The Riverdale Press in 2016.

Ms. Campbell-Adams saw a higher calling in her work.

“Over and over, I’ve heard people come in and say: ‘Listen, I don’t like carrot cake. I’ve never eaten carrot cake,’” she told WCBS-TV in New York this year. “But then their whole attitude changes. I tell people we’re in the conversion business because we’ve converted so many people.”

It all started in the 1980s, when she and Lloyd Adams were dating in Harlem. She was a master control operator for a television broadcaster, and he was a hospital social worker. She thought they’d soon marry and begin a typical family-oriented lifestyle.

But Mr. Adams, a handsome former college basketball star, harbored a passion that would derail any such conventionality: baking. Specifically, baking the sumptuous carrot cake recipe that his grandmother had developed in the Virgin Islands and passed down to his mother, who passed it down to him.

Mr. Adams made the cake for friends when they came over to watch Knicks games at his apartment, and soon they started demanding it. Eventually, he decided to try selling his walnut-and-raisin-studded carrot cake. When he told Ms. Campbell-Adams about his plans, she regarded him skeptically and asked, “You bake?”

They installed a pizza oven in the basement of the building where Ms. Campbell-Adams lived and started spending their nights baking cakes, which Mr. Adams then delivered around town in the morning, selling them to coffee shops and restaurants. He developed a loyal wholesale clientele, including two prominent sites in Harlem: the soul food establishment Sylvia’s and the cafeteria of the Adam Clayton Powell Jr. State Office Building, where slices of his cake were sold alongside curried goat and stewed chicken.

Finally, Mr. Adams decided to commit to his confection and quit his day job. Ms. Campbell-Adams was alarmed by the decision, but she gradually embraced his carrot cake gospel and provided her marketing expertise to the operation. As he sold cakes, she worked the phones: “I’m a representative from Lloyd’s Carrot Cake, and we’re distributing made-from-scratch carrot cakes in the area, and would you like to try a sample?” 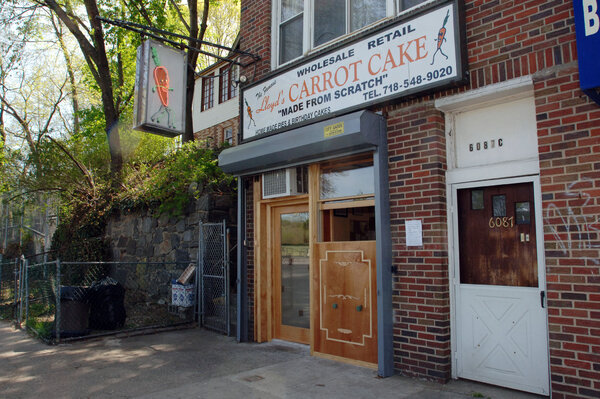 In 1986, their operation outgrew the basement and moved to Riverdale, opposite Van Cortlandt Park. Initially it was a wholesale business, but the decadent smells of the bakery kept luring passers-by inside, so they added a retail counter. The couple also installed a neon sign outside the shop featuring their mascot: a smiling, dancing carrot.

Mr. Adams died in 2007 after having a heart attack, and the bakery closed for weeks. As concern about its fate spread through the neighborhood, Ms. Campbell-Adams, by then a successful marketing director for Time Warner Cable, privately decided what to do. She reopened the shop, and a few months later she quit her job to run Lloyd’s full time.

She opened an East Harlem location in 2011, along with a juice bar next door, Joosed by Lloyd’s. In 2016, she expanded the flagship bakery in Riverdale, acquiring an adjoining storefront, and formed relationships with Zabar’s and Food Emporium, which started selling the cake.

Ms. Campbell-Adams delighted in learning that her cakes traveled far past New York. Customers told her about sending cakes to China, Nigeria, Ecuador and the Philippines. A cake was once shipped to a firefighter who was called up to serve in Iraq, a surprise from his ladder company in the Bronx.

“I’m going to hang up a map and put a pin in everywhere that someone tells me they’re going with my cake,” she told The New York Times in 2016. “I was just taken aback that our cake went so far.”

Betty Joy Campbell was born on May 17, 1955, in Costa Rica and raised in Puerto Limón. Her father, Alexander Campbell, immigrated to New York and became a shipping clerk in the Bronx so he could send money back home. Her mother, Ermaleen (Lawrence) Campbell, a seamstress, raised Betty and her three siblings in Costa Rica.

When Betty was 10, she joined her father in Harlem, where he’d secured an apartment for the family. She grew up in the Seventh-day Adventist Church and attended Washington Irving High School.

After graduating with a communications degree from the City College of New York, she started working for a company that later became part of Time Warner Cable.

She met Mr. Adams at a nightclub, and they were married in 1983. Around this time, her father bought the building his family was living in, and she and Mr. Adams later raised their two children there. She eventually inherited the building and became its landlord.

In the late 1990s, Mr. Adams had renal failure, and Ms. Campbell-Adams donated a kidney to him. His health problems later worsened, however, and he died at 58.

In an interview at the bakery with The New York Times shortly after it reopened, Ms. Campbell-Adams confirmed that the business was around to stay. “This is Lloyd’s legacy,” she said. “They say he’s looking down on me from above.”

Today, Lloyd’s Carrot Cake churns out 1,500 cakes daily (including red velvet, German chocolate and pineapple coconut), and it goes through 2,500 pounds of carrots weekly, along with 2,000 pounds of cream cheese for its frosting.

In addition to her son, Ms. Campbell-Adams is survived by a daughter, Lilka Adams; a sister, Glenda Campbell Roberts; a brother, Erwin; a half brother, Carl Campbell; and a half sister, Brenda Campbell Gibbs.

As the pandemic gripped New York in the spring and her restaurant clients started to close, Ms. Campbell-Adams worried about the bakery’s fate. To her astonishment, however, she became busier than ever.

When Van Cortlandt Park crowded over the summer with New Yorkers eager for open air, she sold cakes constantly. The brand’s Thanksgiving sales were the strongest in years. And as Christmas approached, Ms. Campbell-Adams baked through nights and weekends in preparation for the holiday rush.

One cold evening this month, she was finishing up at the bakery when she learned that a bulk pickup of cakes was delayed. Rather than risk a late delivery, she drove the cakes herself to a pickup stop in Mount Vernon. Shortly after arriving and entering a parking lot, she felt unwell. Her Jeep reversed and then abruptly stopped. She was found in the car the next morning.

At a vigil held outside the Riverdale bakery the following night mourners lit candles and offered remembrances. People soon started asking her family about the future of Lloyd’s Carrot Cake.

“When she passed, me and my sister said to each other, ‘What are we going to do tomorrow? Close the doors?’” he added. “But then I heard my mom in the back of my mind saying, ‘You can’t turn them away.’ She’d say, ‘Well, we’re closed, but what do you need?’”