Home » Americas » Biden signs the stimulus bill hours before a prime-time address kicking off a campaign to sell it to the public. 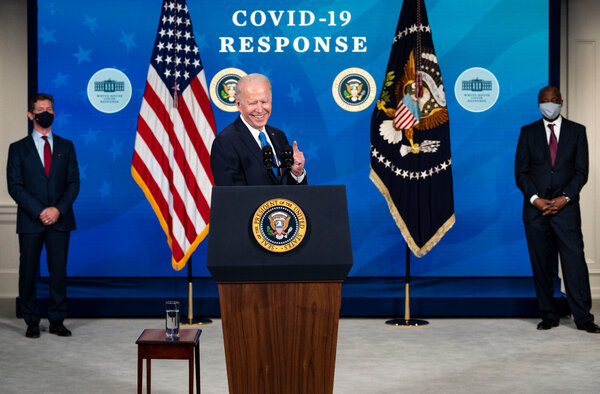 President Biden signed the $1.9 trillion economic relief package on Thursday afternoon, ushering in an aggressive infusion of federal aid in a far-reaching effort to address the toll of the coronavirus pandemic.

“This historic legislation is about rebuilding the backbone of this country,” Mr. Biden said, “and giving the people of this nation, working people, the middle class folks, people who built the country a fighting chance.”

Mr. Biden had originally been scheduled to sign the bill on Friday, after it had been reviewed again and printed. But the president and his advisers, aware that low- and middle-income Americans are desperate for the round of direct payments that the bill includes, moved up the timeline to Thursday afternoon.

Ron Klain, Mr. Biden’s chief of staff, wrote on Twitter earlier on Thursday that the enrolled bill arrived at the White House on Wednesday night and that the president would sign it a day earlier than planned because they wanted “to move as fast as possible.”

But he added, “We will hold our celebration of the signing on Friday, as planned, with Congressional leaders!”

The president signed the measure in the Oval Office hours before he is set to deliver a prime-time televised address on Thursday night, kicking off an aggressive campaign to inform voters of the benefits that are coming to them through the relief package.

Man Crushed to Death by Elevator in Manhattan Building