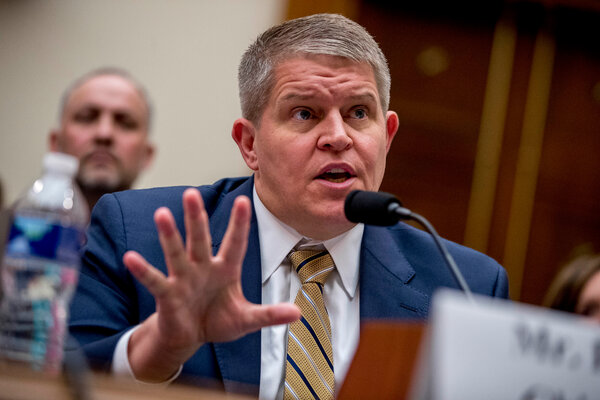 President Biden will nominate David Chipman, an adviser to the gun control organization founded by former Representative Gabrielle Giffords, to lead the Bureau of Alcohol, Tobacco, Firearms and Explosives, or A.T.F., according to two people with knowledge of the move.

The appointment of Mr. Chipman, a former agent with the A.T.F. — the embattled agency tasked with enforcing firearms laws — comes after a wave of recent mass shootings and after weeks of pressure by the Giffords group and other organizations for Mr. Biden to pick a director.

Mr. Chipman's prior advocacy of an assault weapons ban and other restrictions will make it hard for him to muster the 51 votes needed for confirmation, and Senate Republicans have successfully blocked potential A.T.F. directors who were much more in line with their pro-gun base.

Mr. Chipman, a gun owner, spent 25 years with the bureau, serving on its SWAT team and working on high-profile gun trafficking cases.

“You know, we’re fortunate that, you know, Gabby was shot with a handgun,” Mr. Chipman said on a podcast in 2019, discussing the 2011 attack on Ms. Giffords in which she was shot in the head and six people died. He added that she would not have survived if she had been shot by an assault rifle.

The nomination is expected to be officially announced on Thursday, along with several other executive actions Mr. Biden plans to take to address the proliferation of gun violence this year.

The pick “is exactly what A.T.F. needs after six years without a permanent director,” said Senator Richard Blumenthal, Democrat of Connecticut, and a proponent of tighter gun regulation.

The post has not been an easy one to fill.

One of the main problems in picking a director, according to two gun control activists in close touch with the administration, is that potential candidates are reluctant to sign on for a nomination that is likely to go down in defeat.

Over the last two decades, Republicans, with the support of conservative Democrats, have embedded into spending bills riders intended to constrain the bureau, including limits on unannounced inspections of gun dealers, prohibitions on documenting the inventories of gun shops and an especially damaging provision that bars the agency from digitizing its records.

In 2006, N.R.A.-allied lawmakers enacted a provision making the position of A.T.F. director, which had previously been a political appointment, subject to Senate confirmation.

As a result, only one director, Obama nominee B. Todd Jones, has been confirmed over the last 15 years.

The appointment was reported earlier by The Associated Press.

US writer says Trump sexually assaulted her in mid-90s