Home » Americas » Biden will press Merkel on China and Russia during her visit to Washington. 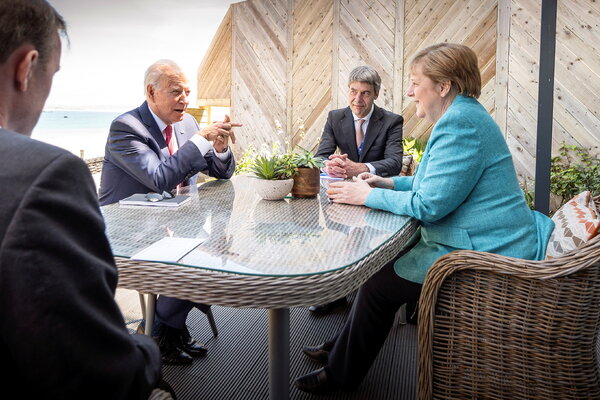 President Biden will host Angela Merkel at the White House on Thursday in a working visit that will give him an opportunity to press the outgoing German chancellor on his geopolitical priorities while shoring up a diplomatic relationship that had frayed during the Trump era.

Ms. Merkel, who has worked with four U.S. presidents as chancellor, has a busy day planned in Washington, a diplomatic victory lap of sorts before her term expires later this year.

She will have breakfast with Vice President Kamala Harris, whom she has praised for serving as the first female vice president and “an example of the possibilities of America.” She will receive an honorary doctorate from Johns Hopkins University. And then she and Mr. Biden, who have known each other since his time in the Senate, will meet before hosting a news conference.

Aware of the need to rebuild ties with Ms. Merkel, Mr. Biden has taken pains to stress that the U.S.-German relationship has entered a more stable era after she endured years of direct broadsides from his predecessor. (Donald J. Trump once accused of her of being “captive to Russia.”)

Just as Ms. Merkel spent years responding mildly to Mr. Trump, she has not been overeager to accept Mr. Biden’s entreaties. During a virtual edition of the Munich Security Conference held earlier this year, she said of the U.S. relationship that “our interests will not always converge.”

It was in part a reference to Mr. Biden’s interest in tamping down Beijing’s rising influence. Ms. Merkel has historically been receptive to working with China, Germany’s most important trading partner.

While the two will issue a joint statement pledging to work together on mutual areas of interest, Mr. Biden’s advisers said Wednesday not to expect any major announcement over a protracted battle over the construction of the Nord Stream 2 gas pipeline to Russia. The project has bedeviled Mr. Biden and his predecessors, who are concerned the Russians will use the pipeline as a coercive tool against Ukraine and other allies.

Earlier this year, Mr. Biden waived congressional sanctions on the Russian company building the pipeline and its German chief executive, effectively conceding that an effort to halt the project, which is expected to be complete by the end of this year, was not worth the expected cost to U.S.-German relations.

On Wednesday, an official who was not authorized to speak publicly told reporters that the waivers had granted the United States “diplomatic space” to work with Germany to address the negative effects of the pipeline.

“I don’t know whether the papers will be fully finalized, so to speak,” Ms. Merkel told reporters in Berlin earlier this week. “I believe rather not. But these will be important talks for developing a common position.”

Woman, 84, dies after being hit by truck in NDG