President Biden’s top diplomat said the United States would uphold international rules and “push back forcefully” against those who don’t, a sharp contrast to the Trump years. 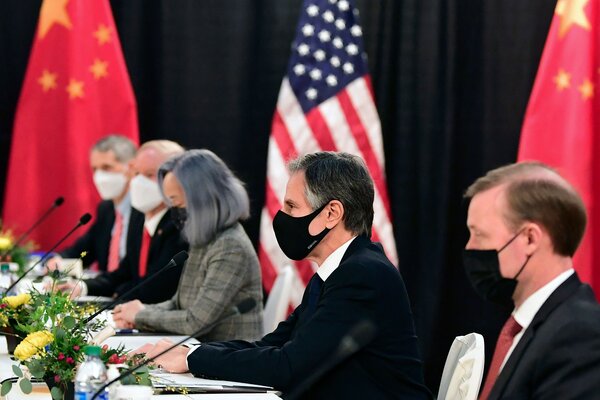 Secretary of State Antony J. Blinken, meeting with counterparts from both China and Russia on Friday, said that the United States would “push back forcefully” against breakers of international rules, even as he acknowledged his own country’s violations under the Trump administration.

Mr. Blinken’s counterparts, Foreign Ministers Wang Yi of China and Sergey V. Lavrov of Russia, took their own diplomatic swipes at the United States, accusing it of hypocrisy and of defining international rules in terms designed to assert Western dominance in the world.

The exchanges came at a United Nations Security Council meeting, convened by China and held virtually via videoconference link, on the theme of multilateral cooperation against the pandemic, global warming and other common threats.

It was in some ways a rematch between Mr. Blinken and Mr. Wang, who was part of a top Chinese delegation that brusquely lectured the United States at a meeting in Alaska two months ago. That unscripted confrontation was regarded heroically in China, where the government has stoked rising anti-Americanism and nationalism.

Although the terms and tone used in the Friday meeting were more diplomatic, the differences were stark in the world views espoused by Mr. Blinken and his counterparts. Those differences suggested that the gridlock among the big powers of the Security Council would not ease anytime soon.

Brazil moving its embassy to Jerusalem matter of when, not if: Netanyahu