PIJIJIAPAN, Mexico — María has been traveling with her two daughters from Honduras in the company of thousands of strangers, most of whom are young, single men. So it follows that she has some concerns about safety as they travel north as part of the migrant caravan.

María, who asked for partial anonymity because of threats on her life in Honduras, has developed two critical coping strategies: befriend and travel alongside men she deems trustworthy, and, unlike most of the caravan’s migrants, don’t sleep in public parks or on sidewalks.

Through charm, guile and a muscular determination to make it with her daughters to the American border, María, who is broke, has somehow managed to line up accommodation in private homes, usually staying for free.

“I’m not going to expose my girls to the street,” she insisted.

The caravan began on Oct. 12 in San Pedro Sula, Honduras, with several hundred people. But it quickly grew into the thousands as it moved into Guatemala and then southern Mexico. Along the way, it has angered President Trump and grabbed international attention.

Recently there has been a sense that the caravan is fraying. Nervousness and exhaustion have contributed to heightened anxiety and paranoia. Sickness is spreading quickly. Dehydration, sore throats, blistered feet, respiratory infections, pink eye and other ailments and injuries are slowing some members and knocking others out of the migration. 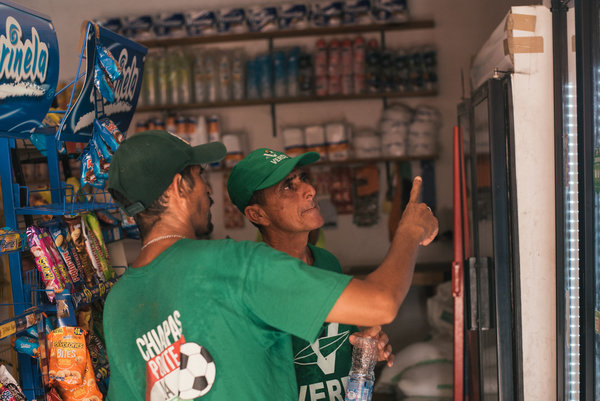 Some migrants complained of a sleepless night on Tuesday in the town of Huixtla because of a rumor that a band of baby snatchers was prowling the encampments.

The bulk of the caravan entered the southern Mexico town of Pijijiapan throughout the day on Thursday. Under a scorching sun, they slumped in wedges of shadow in the lee of the town hall and the main Catholic church, or under plastic sheeting they carried in their knapsacks.

María and her daughters walked into town late in the morning, accompanied by their latest travel partners: Yovani Torres, 50; his brother Wilfredo, 44; Wilfredo’s daughter, María, 18, and her daughter, Stefani, 13 months.

The Torres brothers have their own sharply honed survival skills. They had both migrated to the United States when they were younger and lived there for years before being deported.

The two families had met somewhere on the road in Guatemala — nobody could remember exactly where. They were separated as the procession staggered across the country toward the Mexican border; María linked up with other traveling partners for a few days before losing them, too. But she reconnected with the Torres family this week.

On Tuesday, they left the town of Mapastepec, about 30 miles to the southeast, at 4 a.m. They started off walking and managed to get two rides, one by sedan and the other in a pickup truck, that took them most of the way to Pijijiapan.

María had decided to flee Honduras after her husband was murdered for reasons that, she said, are still unclear. Without him, she had no income and was struggling to support her children.

“I’m 40 and nobody is going to give me work because of my age,” she said, sitting in the shade of the central plaza in this small town of ranchers. “We are looking for work. Pardon me, but the gringo doesn’t want to work. It’s rare to find a gringo that wants to work.”

María had been following the progress of the caravan on the television news in the days after its departure and decided to join. She packed bags for herself and for her daughters Nicol, 11, and Karen, 19, and the three hit the road. Nicol was still in her school uniform.

While poverty was the main reason she left, María said that after her husband’s death, she received threatening calls. She did not press for an investigation into the crime because she had no confidence in the police.

María has an additional motivation for using only her first name. She said she feared her country’s president, Juan Orlando Hernández, whom she — and, seemingly, every Honduran migrant in the caravan — blamed for their country’s poverty, crime and misfortune.

If her asylum petition is rejected by the American government and she is sent with her daughters back to Honduras, she said, she feared reprisals from Mr. Hernández for her criticism.

She, like many members of the caravan, was well aware of Mr. Trump’s vows to block entry to the migrants and his dubious view of their intentions.

“We don’t know if the United States is going to send us back,” she said.

She seemed open to the idea of crossing illegally if she had to. That was the plan of her traveling companions, the Torres family.

Trying to get into the United States, she said, even if it resulted in a long detention, would be better than the Honduran misery they left behind.

“We prefer to die on the American border than die in Honduras from hunger,” she said.

As the group moved north, some people have cleaved off and headed out on their own. Others, the weariest and most infirm, have stayed behind, most with hopes of catching up to the larger group at some point. But some have stopped and applied for asylum, or have turned around and headed home.

The Mexican government says the caravan, once numbering 7,000 or more after it had crossed the Guatemala-Mexican border, had withered to less than 4,000 by Wednesday night. Advocates say that taken together, all the fragments of the group would be much higher, especially considering that there have been reports of hundreds more migrants in Central America rushing to catch up with the main group.

Luis Hernández, 19, a Honduran migrant, said men in the caravan stood vigil over the families all night on Tuesday in Huixtla. They were on such high alert that when several spotted a migrant sprinting toward a food distribution truck early Wednesday morning, they took him for a child thief and tackled him.

The migrants’ path has been eased by an outpouring of support, first in Guatemala, and now in Mexico — from governments, the Roman Catholic Church, community groups and citizens.

In Pijijiapan, doctors and nurses provided free medical consultations and gave out medicine under tents in the main square. Volunteers handed out thousands of sandwiches and bags of water.

Eradio Gómez Cruz, the adviser to the municipal president, said the town had been preparing for the migrants’ arrival since Monday. The first 300 arrived on Wednesday, and several thousand more on Thursday, he said.

“We’ve already lived through natural disaster here, in 1998, when the river flooded, and in 2004, when it flooded again,” he said. “So, we have experience.”

In Mapastepec, where the migrants spent Wednesday night, the municipal president, Karla Erika Valdenegro Gamboa, said in an interview that she had not heard any complaints from her town’s residents as the group surged into town.

“Maybe it’s an inconvenience for neighbors living nearby,” she said. “But nobody has said anything.”

As she spoke, a heavy rain began to fall, drenching everything.

Nearby, in the midst of the downpour, a hand reached from the door of a cafe, extending clothes to a woman who held her sleeping baby in the doorway.

A few minutes later, the hand emerged again, holding sheets, for the night ahead.

An earlier version of this article misstated where María and her daughters would be sent if her asylum petition is rejected by the American government. They would be sent back to Honduras, not to the United States.