Home » Americas » Bolsonaro, a Combative ‘Soldier,’ Gets Off to a Rocky Start in Brazil

BRASÍLIA — “I wasn’t born to be president,” Brazil’s president, Jair Bolsonaro, said during a recent address at his official residence. “I was born to be a soldier.”

The tone used by Mr. Bolsonaro, a former army captain, was lighthearted. But the message underscored how turbulent his first few months as president have been.

In just over 100 days in office, he has used up much of his political capital, with little progress on crucial issues to show for it. Brazilians are growing impatient.

The president, a right-wing populist, was swept into office with an expansive mandate for change by voters fed up with political corruption, violence and the lingering effects of a deep recession.

Instead, his tenure has been roiled by culture wars, disputes among the factions that support him (the military, evangelicals and anti-globalists) and disarray, with two ministers sacked. His party is also under investigation in connection with a possible illegal-campaign finance scheme, and one of his sons, Flávio Bolsonaro, a senator, is under investigation for corrupt practices.

Bills that could help fix the country’s finances and overhaul the criminal justice system are languishing in Congress, where the president has been unable to build alliances, and the economy continues to sputter.

His impulsive and pugnacious manner — which served him well on the campaign trail — has caused consternation now that he is president. During Carnival, he caused an uproar when he posted a sexually explicit video on Twitter. Later he called on the armed forces to commemorate the 1964 coup that started a 21-year repressive military regime.

All of this has left him with the lowest popularity rating of any first-term president at this point in a tenure since democracy was restored in the mid-1980s, according to a poll by Datafolha: Thirty percent of those surveyed called his presidency bad or terrible. 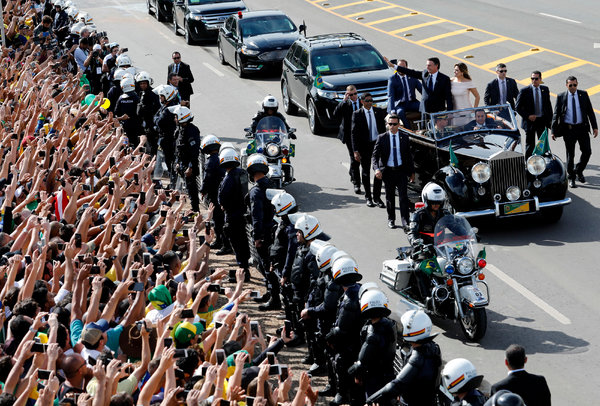 “We’re already in a period of stagnation,” he said. “The markets are predicting that Brazil will not be able to meet its obligations, control its public debt or receive investment.”

Mr. Bolsonaro’s spokesperson did not respond to requests for an interview for this article, and the vice president canceled an interview to discuss the administration’s first 100 days.

Many in Brazil — friends and foes alike — believe Mr. Bolsonaro has been his own worst enemy.

“It’s not the opposition that is creating crises for them,” Marcelo Freixo, a leftist federal lawmaker, said of Mr. Bolsonaro’s administration. “They’re creating their own crises.”

Take Mr. Bolsonaro’s attempt to tackle one of the biggest challenges of his presidency: reforming the nation’s insolvent pension system, which economists see as a ticking bomb that the world’s ninth-largest economy must defuse to avert a crisis.

Paulo Guedes, Mr. Bolsonaro’s finance minister, recently told lawmakers that Brazil spends 10 times as much on pensions as on education, a situation that amounts to “sending a plane across the ocean without fuel.”

Mr. Bolsonaro was credited with putting forward a bill that would significantly trim the generous benefits, which allow some Brazilians to retire before they turn 50. He has also broken with a past practice that often fueled corruption, in which presidents doled out ministries, high-paying government jobs and discretionary funding to parties across the political spectrum to build coalitions and pass bills in Congress.

But without a new strategy in place, Mr. Bolsonaro has struggled to keep even the 58 lawmakers of his own party in line, calling into question his ability to pass politically unpopular measures in Brazil’s unruly, multiparty legislature, which has 594 representatives.

Hearings on pension changes have devolved into shouting matches, frustrating proponents inside and outside the government, and leading even former allies to speak of Mr. Bolsonaro with open contempt.

Rodrigo Maia, the speaker of the House, had initially agreed to shepherd the pension overhaul. He has since washed his hands of doing the government’s bidding, comparing his position to that of a battered woman who has endured enough abuse.

The outlook for the bill’s passage is growing dimmer.

“My outlook for the future: We won’t approve the pension reform, we will slip into a recession and the government will be left hemorrhaging,” Mr. Kataguiri, the libertarian legislator, said in an interview.

Senior government officials argued in interviews that the stormy relationship with Congress is a sign Brazil is undergoing a necessary, if chaotic, transformation on Mr. Bolsonaro’s watch.

“Brazil did not have a key principle of democracy operating,” Mr. Santos Cruz said in an interview. “For a long time, we lived without independent powers, because the executive branch was buying off the legislative branch.”

Eduardo Bolsonaro, a federal lawmaker and one of the president’s sons, said his father was making good on a promise to upend a political system that has fostered corruption and cronyism over the decades.

“We are breaking with a paradigm that always created an inefficient state and sometimes enabled corruption,” he said.

The logjam in Congress hasn’t prevented Mr. Bolsonaro from making good on other campaign promises, his son argued, citing closer alignment with the United States, auctions of state-owned entities and measures to reduce red tape as early successes.

Mr. Bolsonaro has also made it easier for civilians to acquire weapons and for industries to have greater access to protected areas of the Amazon rain forest.

Sergio Moro, a former federal judge who serves as justice minister, said in an interview that the government had taken bold steps to fight the country’s epidemic of violence — one of Mr. Bolsonaro’s main campaign promises.

Mr. Moro presented to Congress a proposed overhaul of the criminal code, which includes tougher anti-corruption measures. And the state has begun to transfer senior drug traffickers from prisons with lax security to facilities where they can no longer run their trade behind bars.

Yet those measures often have been overshadowed by infighting, intrigue and controversial statements by top members of the administration.

Perhaps no one has done more to fuel the tumult than Olavo de Carvalho, a conservative Brazilian writer who peddles political commentary and conspiracy theories by uploading videos and tweets from his home in Virginia. Mr. Bolsonaro credited Mr. Carvalho with propelling “the revolution” that brought him to the presidency while he sat next to him at a recent dinner in Washington.

But Mr. Bolsonaro’s high regard for Mr. Carvalho is not universally shared in the administration — in large part because of Mr. Carvalho’s fringe views.

Mr. Carvalho has claimed that Pepsi is sweetened with the cells of aborted fetuses; that legalizing same-sex marriage leads to legalizing pedophilia; and that calamitous natural disasters such as Hurricane Katrina and the 2011 earthquake in Haiti may be divine punishment for practicing African religious traditions.

Two of the ministers who joined the government at Mr. Carvalho’s suggestion have generated similar controversies, which critics within the government see as self-defeating.

Soon after taking office as education minister, Ricardo Vélez, a little-known, ultraconservative academic, said in an interview with a newsweekly that Brazilians who travel abroad behave like “cannibals” who steal things from hotels and life vests from planes.

He also came under fire for sending a letter to schools demanding that students be read a Bolsonaro political rallying cry after singing the national anthem. He was fired last week.

Another disciple of Mr. Carvalho, Foreign Minister Ernesto Araújo, also came under criticism for saying that Nazism was a leftist movement — a claim Mr. Bolsonaro repeated when he visited the Holocaust museum in Israel recently. The museum’s website says the Nazi Party was an outgrowth of “radical right-wing groups.” (Mr. Bolsonaro said last week that “we can forgive, but we cannot forget” the Holocaust, stirring further controversy.)

Mr. Carvalho has taken aim at several of the eight former generals in Mr. Bolsonaro’s cabinet, including Vice President Hamilton Mourão, calling them enemies within the state.

The former generals, meanwhile, have sought to stay above the fray and have come to be regarded as a moderating, stabilizing force on an unruly team.

Augusto Heleno Ribeiro, a former general who oversees security policy in the cabinet, says that reputation is well deserved.

“Our style is to be conciliatory, not incendiary,” he said in an interview. “That’s because we know full well the perils of extremism.”

US permits sale of cigarettes with 95 per cent less nicotine