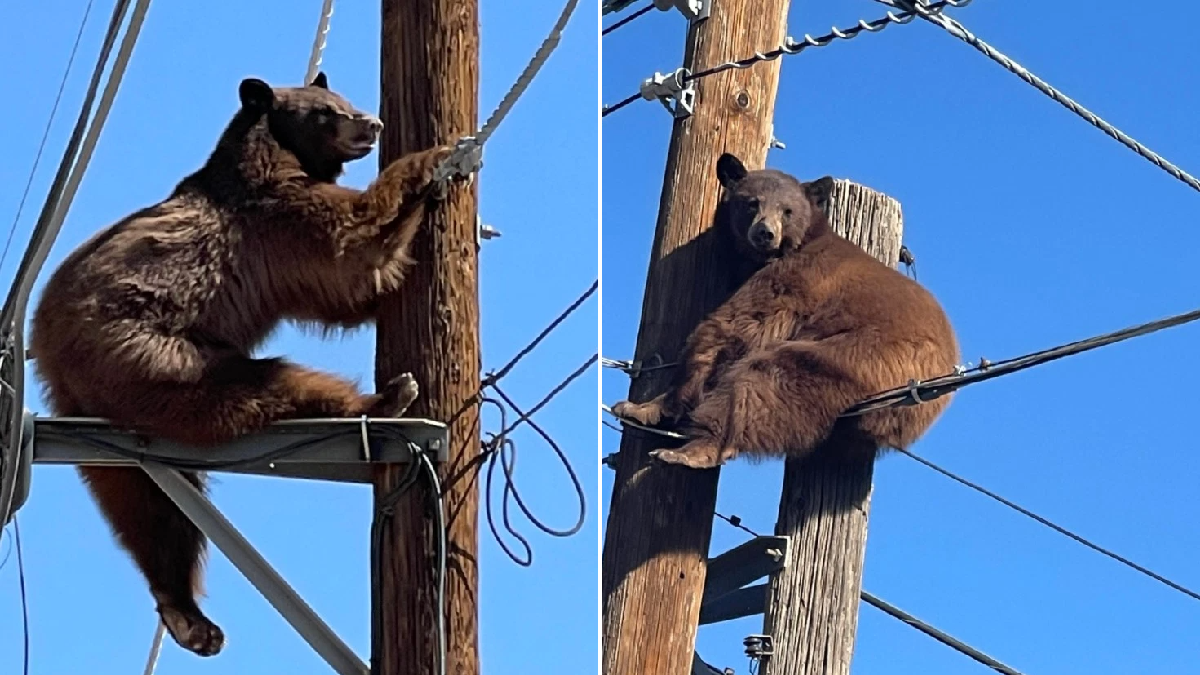 US Border Patrol was called to respond to a crisis near the US-Mexico border on Sunday morning – and it did not involve migrants crossing illegally. Rather, it was a big black bear that climbed two utility poles by a border town.

The bear sat on utility wires along US 191 near Douglas, an Arizona town bordering Mexico, about 120 miles southeast of Tucson. The Arizona Game and Fish Department tweeted photos of the burly mammal showing that it kept adjusting its position on the live wires.

Utility company staff ‘stood by, as the bear risked electrocution’, the game and fish department tweeted.

Border Patrol agents had the help of the Douglas Police Department, Cochise County Sheriff’s Office and state wildlife officers in trying to coax the bear to climb back down. The bear did finally make its way down.

Part of US Hwy 191 was briefly closed Sun. am while AZGFD Tucson, Douglas PD, Cochise SO and US Border Patrol drove off a bear that had climbed two utility poles. Two dozen onlookers scattered when the bear climbed down on its own. AZPS stood by, as the bear risked electrocution. pic.twitter.com/RkL2W197Cw

‘US Border Patrol drove off a bear that had climbed two utility poles,’ the game and fish department tweeted. ‘Two dozen onlookers scattered when the bear climbed down on its own.’

The bear was not harmed, according to WLTX. Authorities did not say how long the bear sat atop the utility poles.

Part of the highway that was closed in the morning due to the incident was soon reopened.

Black bears in Arizona can grow more than six feet long and weigh up to 400 pounds, according to the game and fish department. Bears began coming out of their winter slumber last week and sighting numbers were up across the state, Arizona wildlife officials said.

‘Bears may be emerging from the winter dens late this year, because sustained temperatures above 40 degrees (Fahrenheit) at elevations 5,000 and above were lacking,’ the state wrote on Facebook. ‘Bears are hungry after there winter torpor.’

Some social media users sympathized with the bear.

‘Not gonna lie, that bear looks like it just wants a few freakin’ moments of time, lemme alone in that second pic,’ a Twitter user wrote.

Another Twitter user replied: ‘Probably a mother with crazy kids. I can relate.’

Justice Ruth Bader Ginsburg to lie in state at Supreme Court, US Capitol