ATLANTA — Brian Kemp, the Republican who has claimed victory in Georgia’s governor’s race, said on Thursday that he was resigning as secretary of state, removing himself from the process of determining whether he had in fact been elected.

With some ballots still to be counted, his Democratic opponent, Stacey Abrams, is just shy of enough votes to force a runoff. Ms. Abrams has not conceded, and The Associated Press and other major news organizations say the race is still too close to call.

Mr. Kemp attracted mounting criticism during the campaign for his management of an election in which he was also a candidate, but he had dismissed repeated calls from Democrats for him to resign in the weeks before Election Day.

Mr. Kemp made no mention of the elections process on Thursday in his resignation letter to the outgoing Republican governor, Nathan Deal, saying he was resigning because he wished “to focus on the transition to my gubernatorial administration.”

Appearing with Mr. Deal at a morning news conference at the State Capitol in Atlanta, Mr. Kemp said, “I think in light of where we are now, this will give public confidence to the certification process, even though, quite honestly, it’s being done at the county level.”

Robyn A. Crittenden, the commissioner of the Georgia Department of Human Services, will become the acting secretary of state and oversee the certification of Georgia’s election results. Ms. Crittenden is assuming the office at a volatile moment in Georgia, with Ms. Abrams’s campaign still raising pointed questions about the integrity of the election.

Ms. Crittenden will also supervise runoffs in at least two other statewide races, one of them for secretary of state, as well as one for governor if Ms Abrams’s campaign succeeds in forcing one.

As Mr. Kemp’s resignation took effect at 11:59 a.m. Thursday, his office said he had won 50.3 percent of the vote and held a lead of about 63,000 votes over Ms. Abrams. To win the governorship, Mr. Kemp must have an outright majority. 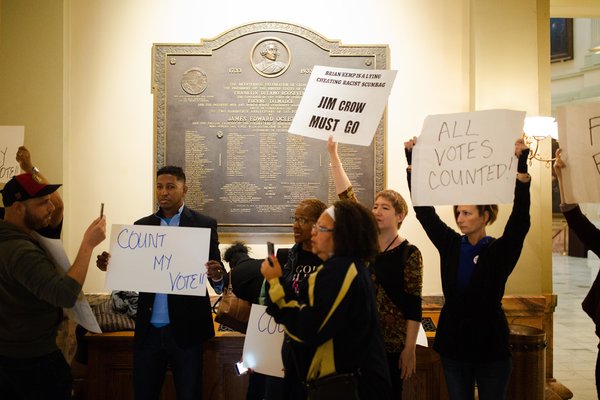 But Ms. Abrams’s campaign believes there is still a potential path to a runoff, once all remaining absentee and provisional ballots are tabulated.

“Why is Brian Kemp rushing to declare himself the winner even as additional votes come in that could change the outcome?” an email circulated by Ms. Abrams’s campaign asked on Thursday morning.

Mr. Kemp’s resignation as secretary of state appeared to render moot a federal lawsuit filed on Tuesday by the nonprofit group Protect Democracy demanding Mr. Kemp’s recusal. A hearing in that case was scheduled for Thursday.

As Mr. Kemp and Mr. Deal spoke at the Capitol, protesters stood outside the governor’s office suite with signs demanding that every vote be counted properly. A detachment of state troopers stood guard.

Mr. Kemp’s dual roles as both player and referee in the governor’s race has infuriated Democrats ever since he won the Republican nomination. They frequently accused him of using his office to further a campaign of voter suppression, through purges of voter rolls and other disputed actions.

Jimmy Carter, who was governor of Georgia before being elected to the White House, warned Mr. Kemp in a letter that his refusal to step down before the election ran “counter to the most fundamental principle of democratic elections — that the electoral process be managed by an independent and impartial election authority.”

Over the weekend before Election Day, Mr. Kemp took a step that drew the greatest criticism of all. In a vaguely worded announcement that offered no evidence, Mr. Kemp’s office said it had opened an investigation into the Democratic Party of Georgia after “a failed attempt to hack the state’s voter registration system.”

Democrats denied any wrongdoing and condemned the investigation — and especially the public announcement of it two days before the election — as a last-minute political stunt. But Mr. Kemp once again rejected calls to step down at that time.

On Thursday morning, standing in the stately ceremonial office long used by the state’s governors, he said he would now spend his time preparing to move in.