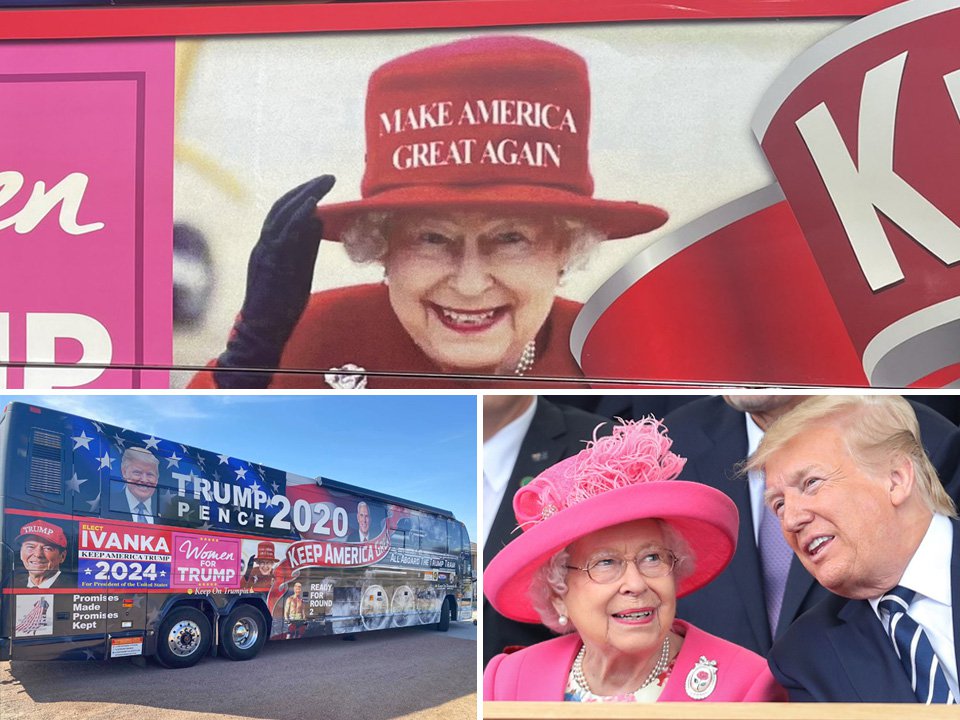 The image of the Queen was seen on the ‘Trump Train’ bus, which is owned and operated by Trump supporter Buddy Hall, at a rally in Florida last week for Republican Representatives Matt Gaetz and Marjorie Taylor Green.

An unnamed Palace spokesperson told BuzzFeed News on Wednesday that they are aware of the Queen’s picture on the bus and that ‘representations asking for removal have been made’.

Trump Train is an ‘unofficial campaign tour bus to support the 2020 reelection of President Trump’, according to its GoFundMe page. It is not officially affiliated with Trump, or Gaetz or Greene, who are his staunch allies.

A Facebook page for Trump Train indicates that the photo of the Queen has been plastered on the bus for more than a year. However, it seems to not have garnered widespread attention until the ‘America First’ rally in The Villages retirement community last week.

A spokesperson for Greene similarly did not see an issue with having the Queen’s tampered image on the bus.

‘You do know what a meme is right?’ the spokesperson told BuzzFeed News.

The original picture of the Queen was taken in Anglesey, Wales, on April 1, 2011, by Getty Images photographer Christopher Furlong.

In the faked image, the Queen wears a red coat and Trump’s ‘Make America Great Again’ campaign slogan in its signature white font is displayed across her matching red top hat, instead of the actual rose design.

Additionally, the Queen’s flower brooch is replaced by a ‘Q’ symbolizing the QAnon conspiracy theory, which claims that Trump was fighting a ‘deep state’ network of political, business, entertainment and media elites. Greene previously voiced support for the unfounded theory.

What We Know About the Michelle Carter Suicide Texting Case

She Was Raped by a Classmate. She Still Had to Go to School With Him.