Home » Americas » Bust Magazine Is on a Mission

“The blood’s not real,” said a staffer at the Brooklyn headquarters of Bust, the independent, feminist lifestyle magazine and website. Her tattooed and bare arms were streaked with red, as were those of an intern, who quipped, “Just another day at the office.” They had been working on a photo shoot for a Halloween-themed haunted house feature.

It was a symbolic moment. You don’t need to be a shrink to associate red with power and boldness, as well as with important womanly issues, much as Bust does.

Bust is a rarity, having kept its cult following while staying afloat in a media sea of bankruptcies, mergers and buyouts. Founding editors Debbie Stoller and Laurie Henzel started the magazine with a Riot Girls sensibility in 1993. Twenty-five years later, they are still here.

“We started Bust because women’s magazines were crap and made people feel bad about themselves,” Ms. Stoller, 55, said from her office, located in Sunset Park’s Industry City. “I wanted to make women feel better and make a different kind of women’s magazine.”

Their aim was not purely political though; they wanted the magazine to be fun. “Bust has never asked readers to divide ourselves into politics versus fashion or seriousness versus adventure,” said Gloria Steinem, the political activist who co-founded Ms. Magazine in 1972, in an email.

In the early ’90s, Ms. Stoller and Ms. Henzel started asking friends “to write stories they didn’t see reflected in the media about their lives,” Ms. Stoller recalled. “We Xeroxed 500 copies at work, and that was our first issue.” 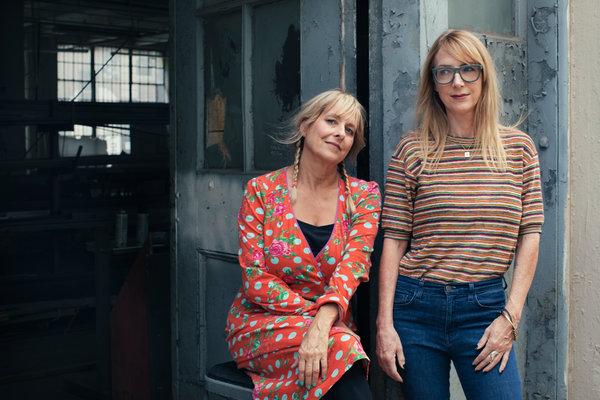 The magazine was a good 15 years ahead of the outspoken and unapologetic feminist content that would happen online in the aughts, said Anna Holmes, editorial director at Topic.com, a visual storytelling platform, which is part of First Look Media.

“Bust was an examination of gender politics,” said Ms. Holmes, who was also the founder of the feminist blog Jezebel and its editor in chief for three years. “Bust has legitimacy and authenticity because they predate all of the feminist websites, newsletters and verticals that cropped up in 2009 through today.”

The scrappy magazine has endured financial struggles (it still does); being bought by a tech company and then having to buy itself back; the bursting of the internet bubble; Sept. 11; losing business partners; multiple office moves around New York as the city became more expensive; and perhaps most importantly, the implosion of the magazine print business. Old print competitors like Jane and Teen Vogue are long gone. Other downtown alternative outfits, like The Village Voice, have also stopped publication.

“This is a great time to be a small magazine,” said Samir Husni, the director of the Magazine Innovation Center at the University of Mississippi, in Oxford, Miss. “You’re in the business of customers who count, rather than counting customers.”

A Trump bump in 2016 helped, as enraged women took to the web, each looking for ways to lend their support. They donated money to Bust; its subscriptions increased. But the enthusiasm was short-lived. The website is particularly hard to finance because of changing Facebook algorithms and Google ads that don’t bring in much revenue.

All that said, since Bust’s inaugural issue, not much has changed in terms of its goals or content, or even its funding. Ms. Stoller and Ms. Henzel didn’t have money then; they don’t have much now.

When times are especially lean, Ms. Stoller explained, she and Ms. Henzel cut their own salaries so as not to bring on debt (the magazine has always been debt-free, she said). “We never spend more than we have. We find cheaper ways to do things, we learn new skills so we don’t have to outsource. And we make sure we balance out.”

Sometimes that works, sometimes not. Over the past two months, neither Ms. Henzel nor Ms. Stoller have paid themselves at all.

“If we did, we wouldn’t be able to pay our staff. There isn’t enough money,” Ms. Stoller said. “Our salaries are the first things we cut. We did it once before in 2008, and now again. It’s harder and harder to get people to pay for anything, especially when people are producing all this content and giving it away for free and living off investors’ dollars.”

The Bust team is small. There are six full-time employees and a handful of part-timers; a web editor, a freelance ad sales person, an editor on the West Coast, and rotating interns. Together, Ms. Stoller and Ms. Henzel wear various professional hats, including editor in chief, publisher, creative director, circulation and distributions manager, web design, human resources and senior finance officer.

The magazine, which is published six times a year, has approximately 10,000 subscribers. There are also newsstand sales and a pass-along circulation rate bringing it up to 70,000. The website fetches an average of 500,000 unique visitors every month.

“I learned so much from Bust’s website,” said Rachele Merliss, 21, a senior at Wesleyan University in Connecticut who was an intern this past summer. “I’ve been really interested in feminist and social justice issues since middle school.” Ms. Merliss was able to write every day, she said, publishing articles about the culture of inappropriate behavior by male counselors at summer camps; the controversy over banning straws; and equal pay for black women.

Bust has provided opportunities for young writers to stretch their muscles and build their brands. But there’s a caveat.

Interns and web writers write for free, and freelancer rates are humble. “People pitch us and don’t realize we only pay $150-$200 for features in the magazine. When we tell them, sometimes they don’t care; sometimes they take it elsewhere,” Ms. Henzel said. “If they can’t place it, they come back,” she said, explaining that clips from Bust still hold cachet in the publishing world.

Aileen Gallagher, an associate professor of magazine journalism at Syracuse University, agrees that Bust is respected.

“I interviewed Samantha Bee in 2003 for them. I was 25. It was my first national clip, and it meant I was legit,” said Ms. Gallagher, who was paid $150. Today, she still writes the occasional unpaid book review for Bust simply because she wants to. “I became a feminist from reading Bust,” she said. “They take chances on writers and publish a lot of women of color. Writing reviews for nothing is how I support them,” she explained. “It’s not a financially sound business model, but it is socially responsible.”

Many celebrities still seem game to be on Bust's cover, too. Bjork, Tina Fey, Amy Poehler, Solange Knowles, Amy Sedaris and Cher, among many other big names, have made appearances. The comedian Jenny Slate recently hosted Bust’s 25th anniversary party, with performances by Phoebe Robinson of 2 Dope Queens, the singer-songwriter Erykah Badu and the actress Amber Tamblyn.

But the stars don’t pay the bills, so Bust has been diversifying. Three times a year, for example, it puts on the Bust Craftacular, a large indie craft fair whose vendors are mostly women, in Greenpoint, Brooklyn. Yet even that’s not easy.

“There’s more and more competition within the craft fair space, and we really count on these to generate income. Without them we wouldn’t be able to do this magazine,” Ms. Henzel said. “Then other people started doing them too, so we had to get creative in addition, like offering classes at the event.”

Ah, the paradox of being rebellious in a capitalistic world.

“Bust was one of the original resistance magazines,” Mr. Husni said. “They never let an ad influence their decision, they remained in touch with their audience, and they provided an antidote for women before it was the norm,” he said. “They have a lot of financial trouble, but they were on a mission. When you’re on a mission, you’re not going to let anyone stop you. Their subscribers feel the magazine is like a membership card to a community. That keeps the magazine going.”

What to Know About Workplace Mask Rules