Now, for the first time at the cathedral, a modern-day Jewish figure, the Holocaust survivor, author and Nobel laureate Elie Wiesel, has joined them.

Mr. Wiesel and his family were sent to camps at Auschwitz and Buchenwald, where his father, mother and sister were killed. After the camps were liberated, Mr. Wiesel went on to become an author of 57 books, including “Night,” about his experiences during the Holocaust.

In a phone interview on Wednesday, the Very Rev. Randolph Marshall Hollerith, dean of the cathedral, said that the new bust “reminds us of the reality of the Holocaust, and that must never be forgotten.”

“As so many survivors die and we lose that generation,” he said, “it’s so important that we keep that memory and the work alive.” 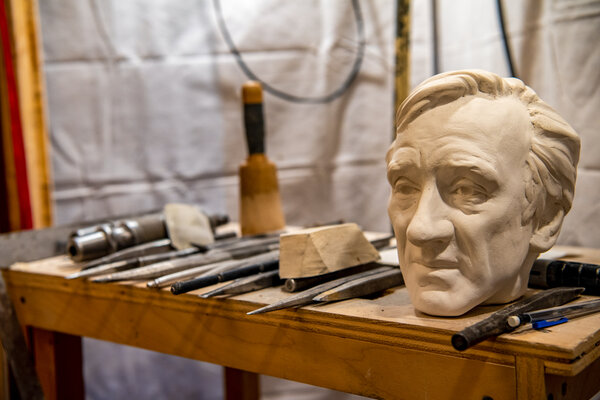 Mr. Wiesel, who became a human rights champion and was the founding chairman of the United States Holocaust Museum in Washington, D.C., was awarded a Nobel Peace Prize, a Presidential Medal of Freedom and a Congressional Gold Medal. He died in 2016 at 87 years old.

The carving of Mr. Weisel reflects its mission to be a house of prayer for everyone and a sacred space for the nation to gather, the cathedral said in a news release on Wednesday. It comes, the cathedral notes, during a time of rising anti-Semitism in the United States and around the world.

“Like millions of European Jews, Elie suffered unimaginable horrors,” Sara Bloomfield, director of the United States Holocaust Memorial Museum, said in a statement. “But he responded to that suffering by devoting his life to writing, teaching, and above all as a moral leader and tireless advocate for our common humanity. That his likeness is now included with others, from many backgrounds, who share these ideals is a fitting tribute to his lasting legacy.”

The bust of Mr. Wiesel took about two years to create, Dean Hollerith said. This process included discussions about whom to honor in the cathedral’s human rights porch (which is near an entrance to the cathedral and is about the size of a living room), making a plaster cast of the subject and then carving his face by hand into stone.

Stone carvers and masons make the busts at the cathedral using medieval techniques, Dean Hollerith said, and the number of people who have the skill are limited.

The cathedral’s stone carver, Sean Callahan, also carved depictions of Mother Teresa, Rosa Parks and Jonathan Myrick Daniels — a civil rights activist and an Episcopalian saint — from limestone blocks already embedded in the four corners of the human rights porch. Mr. Callahan took his “last hit with the chisel” on Mr. Wiesel’s sculpture on April 8. A public dedication of the bust will take place in the fall.

The porch also houses full-figured carvings of other leaders like Archbishop Óscar Romero, a Roman Catholic champion of the poor who was assassinated in El Salvador in 1980; Eleanor Roosevelt; and Bishop John Walker, the first African-American bishop of the Episcopal Diocese of Washington.

Marion Wiesel, Mr. Wiesel’s widow and the vice president of the Elie Wiesel Foundation for Humanity, said in a statement that she hoped that the carving of her husband would help teach generations about his work.

“Not only does his presence in the National Cathedral memorialize his life and honor his commitment to human rights,” she said, “it also ensures that new generations will learn from his teachings and carry the lessons of his life forward into the future.”

Likenesses like Mr. Wiesel’s bust inside the cathedral are called iconography and shouldn’t be confused with depictions of gargoyles and grotesques outside the cathedral, Dean Hollerith said. Those are sometimes comical, like a carving of Darth Vader from the “Star Wars” series.

The cathedral is never finished, Dean Hollerith said. It’s always a work in progress and there’s more room for iconography and new stained-glass windows for future generations to add to. Depictions at the church also include people who have been important to the country, “who have stood up for justice, peace, human rights, you name it,” he said.

The dream of a national cathedral dates to at least 1791 under President George Washington, when he commissioned Major L’Enfant to create a visionary plan for the nation’s capital. Major L’Enfant was the one who imagined a national church.

“It doesn’t just try to lift up the story of the Christian faith,” Dean Hollerith said. “We also, since our very inception, have also tried to include within our fabric the better angels of our nation.”

'This is about livelihoods': US virus hotspots reopen despite second wave spectre