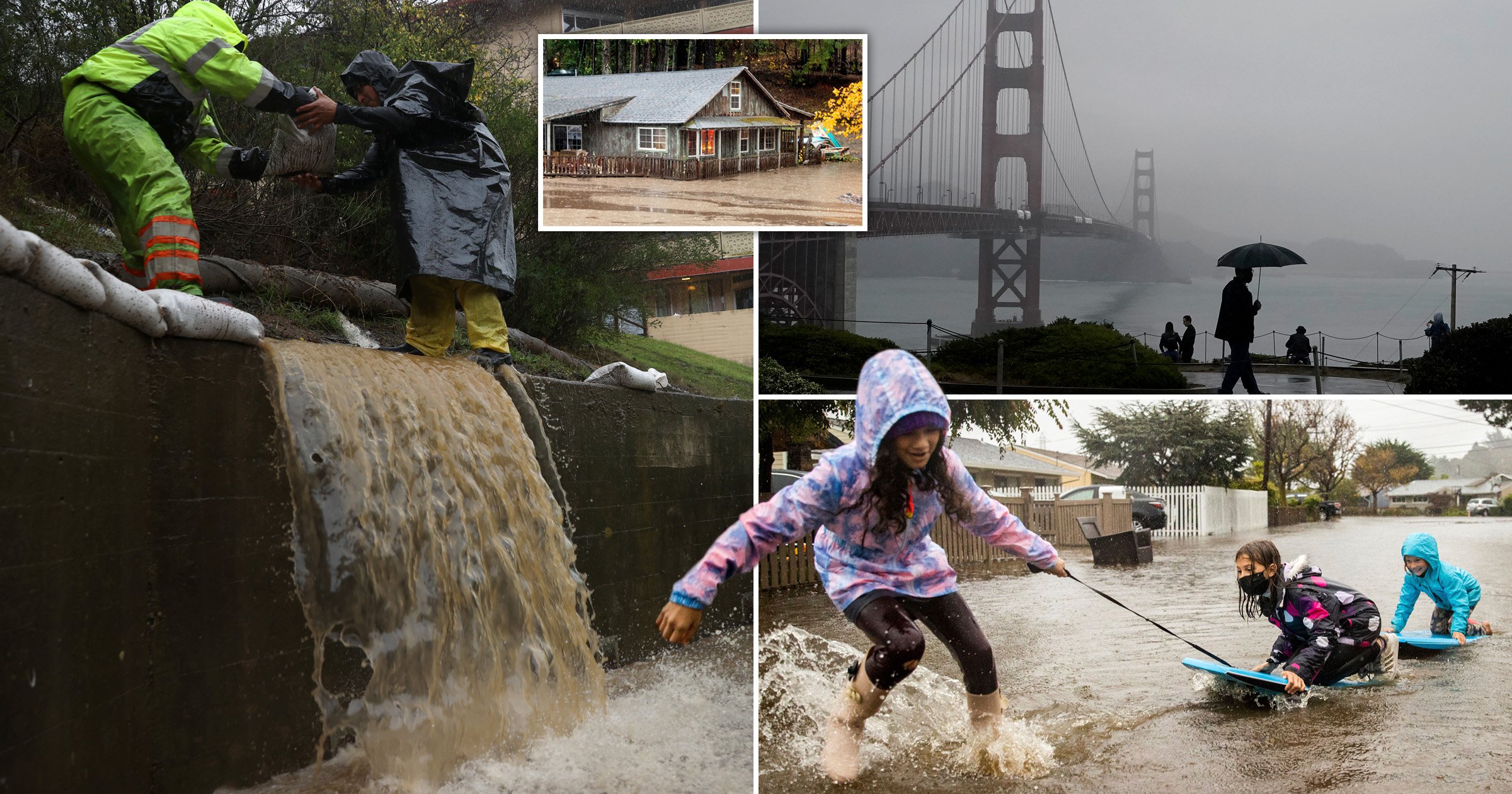 A US state devastated by wildfires and drought has been battered by flash flooding and mud flows.

A ‘bomb cycling’ is battering California after horrendous weather inundated roads with water and toppled trees in areas burned bare by recent fires.

Torrential downpours and strong winds from the powerful storm led to power cuts and rock slides across the northern half of the drought-stricken state.

A ‘level 5 atmospheric river’ hit the state this weekend, smashing rainfall records and covering the Sierra Nevada mountains with snow.

Locals were given numerous flash flooding warnings by the National Weather Service amid ‘staggering’ levels of rainfall – after nearly a year without any.

Two people died in one neighbouring state, when a tree fell on a vehicle.

The problems are being linked to the climate crisis, with global warming meaning that when drought and fire hit areas do see by rainfall, natural defences like forests, vegetation and soils are less able to cope.

There were widespread power outages in Northern California, with Pacific Gas & Electric reporting on Sunday evening that about 130,000 customers did not have electricity.

The organisation later said that power had been restored to about 250,000 customers.

The local weather office said: ‘It’s been a memorable past 24 hours for the Bay Area as the long talked-about atmospheric river rolled through the region.

‘We literally have gone from fire/drought conditions to flooding in one storm cycle.’

The weather service called preliminary rainfall totals ‘staggering,’ including 11 inches (27.9 centimeters) at the base of Marin County’s Mount Tamalpais and and 4.02 inches (10.2 centimeters) in downtown San Francisco.

‘It looks like yesterday was the 4th wettest day ever for downtown SF where records go back to the Gold Rush years,’ the weather service said.

About 150 miles (241 kilometers) to the north, a stretch of State Route 70 was closed because of multiple landslides within the area scarred by the colossal Dixie Fire, which has burned nearly a million acres of land since it started in July.

In the state’s Central Valley, Sacramento got 5.4 inches (13.7 centimeters) of rain, smashing the all-time daily rainfall record, which had dated back to 1880.

Interstate 80, the major highway through the Sierra to Reno, Nevada, was shut down by heavy snow early on Monday.

The same storm system also hit the states of Oregon and Washington, causing power outages that affected tens of thousands of people.

Two people were killed when a tree fell on a vehicle in the greater Seattle area.

In California’s Colusa and Yolo counties, state highways were shut for several miles because of mudslides, the state Department of Transportation said.

The Sacramento weather service tweeted: ‘If you are in the vicinity of a recent burn scar and haven’t already, prepare now for likely debris flows.

‘If you are told to evacuate by local officials, or you feel threatened, do not hesitate to do so. If it is too late to evacuate, get to higher ground.’

South of San Francisco, evacuation orders were in effect in the Santa Cruz Mountains over concerns that several inches of rain could trigger debris flows in the CZU Lightning Complex Fire burn scar when the storm moves through later.

Further south, evacuation warnings for parts of western Santa Barbara County were upgraded to evacuation orders in the area burned by this month’s Alisal Fire.

Officials said mountain areas above 9,000 feet (2,745 meters) in the Sierra Nevada could get 18 inches (46 centimeters) of snow or more from Sunday until Monday morning local time.

Recent storms have helped contain some of the USA’s largest wildfires this year.

But it is unclear if the wet weather will improve the drought plaguing California and the western United States.

California’s climate is hotter and drier now and that means the rain and snow that does fall is more likely to evaporate and less likely to absorb into the soil.