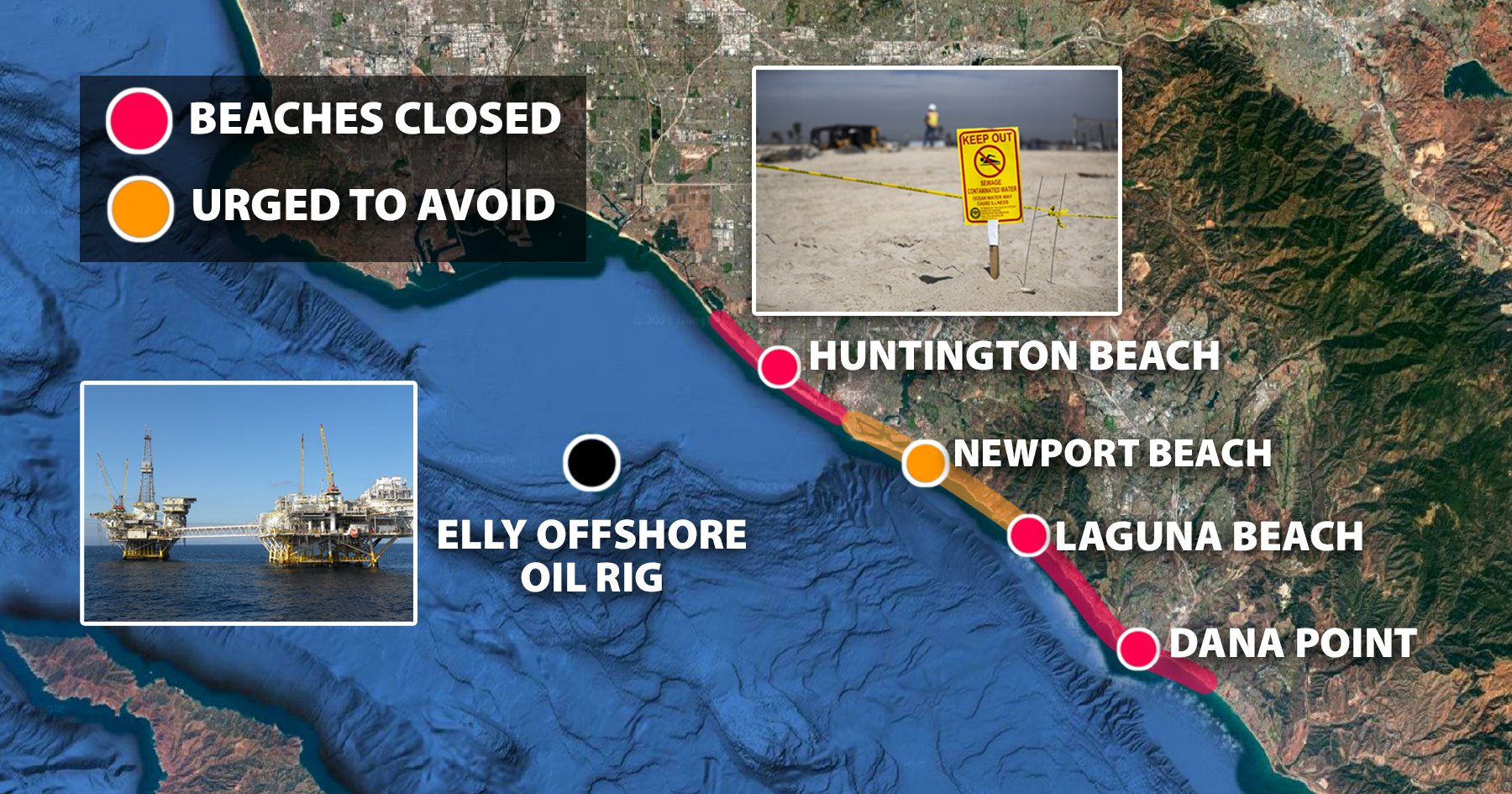 An oil spill from a pipeline leak off the coast of Southern California over the weekend has spread, causing beaches to close and harming wildlife and possibly even local residents.

Crews in Orange County have been working overtime, deploying skimmers and attempting to corral oily ocean water in booms after the offshore pipeline leaked roughly five miles from Huntington Beach on October 2.

The size of the spill was reported to be about 13 square miles, or about 126,000 gallons, the Coast Guard said on Sunday, and has closed Laguna, Huntington and Newport beaches and harbors.

Since then, the maximum oil spill potential has been raised to 144,000 gallons, according to Huntington Beach officials.

Huntington Beach Mayor Kim Carr said the spill, which is affecting six miles of shoreline, could leave the city’s beaches closed for months.

What caused the breach and exactly when it happened is still unknown. Federal and state authorities were aware of the incident by Friday evening, USA Today reported after receiving official spill reports.

Satellites used by the National Oceanic and Atmospheric Administration spotted an ‘anomaly’ in the water overnight.

Yet millions of people flocked to the beaches Saturday morning, unaware of the oily mess ripping through the currents.

An estimated 1.5million people had also already attended a military air show at Huntington Beach that morning, and with temperatures reaching the high 90s, other nearby spots like Newport Beach were also packed.

By the time the first report of the spill was made to the Coast Guard at 9.10am on Saturday, it had grown to two nautical miles long.

And by Sunday, oil and petroleum-coated birds began to appear on Huntington Beach’s shoreline, which was then closed to the public.

The Huntington Beach shoreline and ocean are closed between the Santa Ana River Jetty and Seapoint Street. Residents are not allowed in the water, but people can still be on the sand up to the point of the lifeguard towers. Bike paths in the area are also still open.

Officials say it’s unclear how long the closure will remain.

All city and county beaches in Laguna Beach have been closed since Sunday night.

On top of the beach closures, the oil spill prompted the Orange County Health Care Agency to put out a health advisory. It urges residents who were possibly exposed to potentially harmful oil contaminants seek immediate medical attention.

The impact of the spill on the local environment has also been tremendous.

Birds and marine life could be significantly affected – even if they remain untouched by the oil, they may be exposed through their diet or through later physical contact, NPR reported.

Orange County Supervisor Katrina Foley tweeted on Sunday that officials were starting to find dead birds and fish washing up on the shore. Dolphins swimming through streams of oil have also been spotted, she wrote. All nearby fisheries have been closed as well.

According to USA Today, numerous government probes into the oil pipeline company, Amplify Energy, have launched.

California Governor Gavin Newsom declared a state of emergency in Orange County. He directed state agencies to ‘undertake immediate and aggressive action to clean up and mitigate the effects’ of the spill.

He shoots, he scores: N.B. Museum shows off exhibit on Canada’s favourite game