(Want to get California Today by email? Here’s the sign-up.)

The grim news from the devastated town of Paradise on Sunday came with an ominous asterisk. The Butte County sheriff announced that the death toll in and around the Sierra town had reached 29, matching the largest recorded number of deaths in modern California history from a single fire.

The asterisk: More than 200 people remain unaccounted for, raising the possibility that more bodies will be recovered. Search crews and emergency workers have been scouring the incinerated remains of the town, which is still evacuated of its residents.

Before the fire, Paradise had a population of around 27,000, many of them elderly. A startling 6,453 homes were destroyed.

“Paradise is an old, wooded town with narrow surface streets — and it’s a retirement community,” said Scott McLean, the deputy chief of Cal Fire. The ferocity and speed of the flames were breathtaking, he said. “The winds were phenomenal, pushing everything down across the roadways. Roads were simply blocked. People ran out of gas. It was an accumulation of everything all at once.”

Seven people died in their cars in Paradise. The blaze was so hot that aluminum wheels melted, as they did last year in Santa Rosa during the Tubbs Fire.

In an article published Sunday, we examined how the trauma of the fire was compounded by the difficulty of escape. There was only one main road leading out of Paradise when the fire started on Thursday morning, and it quickly became swamped with traffic. As wildfires in California become larger and more intense, our story raises the question of how many other towns in the state have a similar vulnerability.

Evacuation planning was not an oversight in Paradise. The mayor, Jody Jones, worked for years as a regional manager for the California Department of Transportation. Traffic management is her specialty. The town held evacuation drills.

Ms. Jones worries that no amount of planning could have prevented the panicked gridlock in Paradise.

“I don’t know that you could build the infrastructure to evacuate an entire town that quickly,” she said.

Wildfires are burning near the Sierra Nevada foothills and the Los Angeles shoreline. Track them here.

How You Can Help

Make sure to do your research before donating to charities. Here is a list of nonprofits in the state that are seeking donations, as well as specific sites and organizations in Butte County and Southern California.

(Please note: We regularly highlight articles on news sites that have limited access for nonsubscribers.) 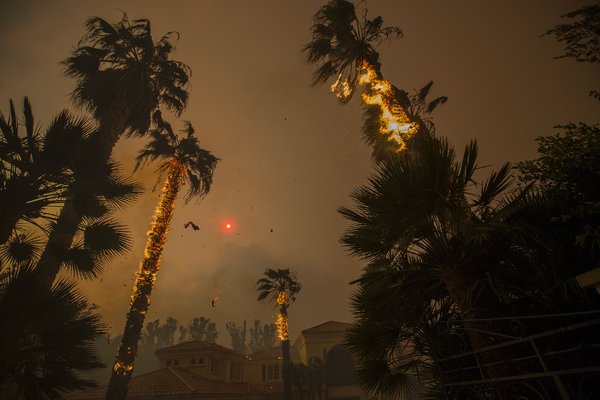 Fires Coverage From Across the State

• Firefighters across the state criticized President Trump for what they called a “reckless and insulting” assessment when he tweeted that poor forest management was to blame for the deadly wildfires. [The Sacramento Bee] [The Los Angeles Times]

• Family members desperately searched for missing loved ones in the chaos of the Camp Fire, now the most destructive in the state’s history. [The New York Times]

• Wildfires have long been a fixture of the California experience, but not like this. Here are images from across the state. [The New York Times]

• PG&E reported problems with one of its Butte County power lines around the same time the Camp Fire ignited in the hills near Pulga. [The Sacramento Bee]

• Paradise was lost — but the town has dodged devastation before. [The Sacramento Bee]

• There are four key elements that make wildfires in California so catastrophic: the climate, the population, fire suppression and the Santa Ana winds. [The New York Times]

• But what exactly are the Santa Ana winds? And why are they such a hazard? [Pacific Standard]

• Wildfires in the fall tend to be particularly destructive. Here’s why. [Weather.com]

• Unhealthy air quality advisories were issued around the Bay Area and elsewhere as smoke from the fires blanketed neighboring regions. Conditions are expected to worsen on Monday. [San Francisco Chronicle]

• Here are steps you can take to protect yourself from the dangers of wildfire smoke. [KQED]

• Wildfires start in rural areas in California, but increasingly they are turning into urban nightmares. [The Tribune]

• This season’s fires have been particularly destructive, but scientists and insurance companies fear the worst is yet to come. [The Atlantic]

• The set for “Westworld” and several other Hollywood shows and films was destroyed when Paramount Ranch in Agoura Hills was destroyed. [The New York Times]

• Six “suspicious” fires in 24 hours prompted the police to increase their presence in Golden Gate Park in San Francisco. [SFGate]

• Will “smoke days” off from school become a regular occurrence in an era of repeated wildfires? [The Press-Democrat]

• Horses, dogs and humans sought refuge on Zuma Beach as the Woolsey Fire burned through Malibu. [The Los Angeles Times]

• California has the toughest gun control laws in the nation, but the shooting in Thousand Oaks has left some wondering if it’s enough. [The New York Times]

• After the shooting, dozens of international readers wrote in saying they were struggling to understand why Americans let gun violence persist. Here is a selection of their comments. [The New York Times]

• A track coach at Newbury Park High School said the Thousand Oaks gunman assaulted her when he was a senior on the team. [The New York Times]

Coming Up This Week

• Join us on Tuesday for a discussion at U.C.L.A. about the uneasy marriage of big tech and American society. The panel will feature our tech columnist Farhad Manjoo and our reporters Katie Benner, Nellie Bowles and Sheera Frenkel. Get tickets here.

• And on Thursday, our technology editor Pui-Wing Tam will join four tech executives in San Francisco to discuss what’s next for the industry’s leadership. Tickets are available here.

These images are part of The Times’s morgue, a 600,000-pound archive of pictures, newspaper clippings, encyclopedias and books — so heavy the collection needs a floor strong enough to handle the weight. Many of the pictures ran in The Times between the late 19th and 20th centuries. This vast collection is now part of a new archival storytelling project: Past Tense. And its first chapter is all about how The Times covered California in the 20th century.

Why California? Veronica Chambers, the editor in charge, explained:

The decision allowed us to cover a little bit of so many things that fascinated us: Hollywood and tech; the farm workers’ movement and farm to table; a spectrum of political activity from the new conservatism to the Black Panthers.

The paper’s coverage of California as a land of possibility was decidedly not cynical.

“California is proudly flexing its sun-tanned muscles these days over the fact that, sometime in the last few months, it surpassed New York as the most populous state in the Union. The individual statistic who tipped the historic balance past the 17,300,000 mark may have been a newborn baby, or a young physicist from M.I.T. winging his way across Lake Tahoe. More likely, it was someone in a station wagon crowded with children and weary parents.”

Our package begins with an essay by the acclaimed novelist Walter Mosley, who writes about his life growing up in California, the son of a Jewish woman and an African-American man, who both came west after the end of World War II. Mosley writes, “The sun shone mercilessly, but no one asked for mercy. Everybody was rich because anything was possible.”

There were so many pictures that we loved of the Golden State that we couldn’t fit them all into our package. So, all this week, we’ll be sharing our favorite California images on the @nytarchives Instagram.

US pupil admits she made up dreadlock attack