(Here’s the sign-up, if you don’t already get California Today by email)

After California’s deadliest wildfire all but wiped out the town of Paradise and killed 86 people in November, calls have risen for Pacific Gas & Electric to be held financially accountable for any role the company may have played in sparking the blaze.

More fires have been traced to equipment owned by the utilities, but in 2017, legislators moved to protect the companies from bearing the cost, arguing that the companies otherwise risked bankruptcy. Utilities are seeking the same thing for 2018.

My colleague Ivan Penn, who covers energy, wrote about how those moves by lawmakers followed extensive lobbying pushes by PG&E and other utilities. I asked him about what that means.

Jill Cowan: What are the stakes if PG&E goes bankrupt? Are we talking about a loss of power? Or would that come at a later point?

Ivan Penn: A PG&E bankruptcy would create challenges for the utility, its shareholders and customers, but those problems would relate more to economics. The operator of the state’s electric grid has said that a PG&E bankruptcy would not affect the reliability of the system. Bankruptcy could increase customer rates as the utility faced higher costs to borrow money.

You wrote that PG&E spent more lobbying in Sacramento in the first nine months of 2018 than the top spender in all of 2017. How did that stack up compared with the state’s other major utilities?

PG&E spent twice as much on lobbying as Southern California Edison and more than six times that of Sempra Energy.

Is it realistic to move away from the investor-owned utility model?

It is possible to move away from the investor-owned utility model. We see that in the growth in government-run programs, known as community choice. Regulators are reviewing possible changes in how PG&E operates.

Your story started with an anecdote about how, as wildfires ravaged the state, a dozen lawmakers were meeting with top power company officials at an annual retreat — on Maui. Californians might want to know whether their reps were there. Who were the legislators?

These lawmakers are members of the budget, appropriations, energy, public safety and insurance committees.

(A note: We often link to content on sites that limit access for nonsubscribers. We appreciate your reading Times stories, but we’d also encourage you to support local news if you can.) 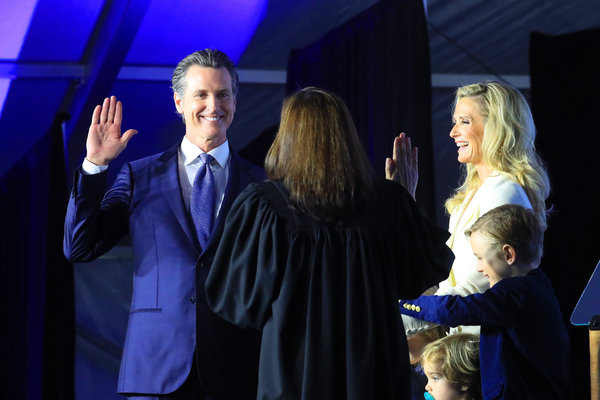 • “The country is watching us. The world is waiting on us. The future depends on us.” Gov. Gavin Newsom was sworn in on Monday before thousands sitting in rain-soaked tents outside the state capital. In his speech, he left little doubt that he has a broader view of government than his predecessor. [The New York Times]

• The police arrested a 47-year-old parolee in connection with a shooting at a Torrance bowling alley last week that left three people dead and four wounded. The authorities said he was identified from surveillance footage. “When he pulled out the handgun, the minute people started hearing shots, even more chaos erupted,” Torrance’s police chief said. [The Daily Breeze]

• For the second time, a man’s dead body was found in the home of Ed Buck, a Democratic donor and prominent member of L.A.’s LGBTQ political circles. The first time was in 2017, when Mr. Buck was investigated in the overdose of another black man, Gemmel Moore. [The Los Angeles Times]

• A man who was arrested in October after sheriff’s deputies saw him dressed in black with a rifle sticking out of his bag has been charged in connection with nearly a dozen shootings in and around Malibu Creek State Park. The shootings left a scientist who was camping with his young daughters dead and terrorized Calabasas. [The New York Times]

• A Cal football player died after being hospitalized for what was described as a medical emergency. The cause of death was unknown. [The Daily Californian]

• California’s legal challenge of the Trump administration’s effort to add a question about citizenship to the 2020 U.S. census is underway. Here’s a primer on the case. [Bloomberg]

• Teachers can’t afford to live in Silicon Valley communities awash in tech wealth and known for their good schools. But some residents are opposing proposed fixes, like employer-subsidized housing. [The New York Times]

• A giant floating boom named Wilson meant to take a bite out of the Great Pacific Garbage Patch set sail from the San Francisco Bay in September. It’s coming home in pieces. [The New York Times]

• What now-former Gov. Jerry Brown’s unique political worldview — his aversion to the cult of political personality, his desire to build community — meant to California, according to a historian who has written about the Brown family legacy. [New York Times Opinion]

• It’s not all bad: Here’s a story about a woman who spreads joy and “hallelujahs” to Fresno drivers by waving to them as they pass. So far she’s never seen an accident — and she says she’s been at it for more than 15 years. [The Fresno Bee]

Los Angeles public school teachers are preparing to strike on Thursday — the culmination of months of failed negotiations and what educators say is years of disinvestment in the nation’s second-largest school system.

District officials have said that the money simply isn’t there and that the frustration should be directed at the state.

My colleagues Jennifer Medina and Dana Goldstein reported in this piece that the strike will affect 900 schools, 30,000 teachers and more than 600,000 students. That’s where you come in.

If you’re a parent of one of those students, we want to know how you’re preparing for the strike. Calling in the grandparents as child care reinforcements? Planning a rotation schedule for taking days off with other parents or sending your kids to school? If you’re an employee of the district, how are you responding? Email us at [email protected]com.

The Goal in Rounding Up New York City’s 250 Wild Turkeys: No Leftovers