Home » Americas » California Today: Risking All to Save Helltown From Burning

(Want to get California Today by email? Here’s the sign-up.)

The wildfire that would become the deadliest in California’s history had just begun ripping through Paradise when Dharma Tony LaRocca started worrying about Helltown.

Mr. LaRocca, a winemaker living in nearby Chico, grew up in Helltown — a tight-knit Butte Creek Canyon community just northwest of Paradise. Though the town’s name conjures up images that are anything but idyllic, he recalled a childhood of fishing and dirt-biking with neighbors who felt more like family; potlucks at the local schoolhouse-turned-museum; and tales of the town’s history as a mining destination known for some of the prettiest gold in the world.

By the time Mr. LaRocca’s parents got there in the late 1970s, though, Helltown was known mostly as a hippie haven. That communal spirit infused his upbringing.

And now, Mr. LaRocca thought, the wind-whipped Camp Fire was about to burn it all down.

He called his parents and sister. Once they were safe at his house, he hopped in a truck with his brother-in-law and a buddy. They got to a ridge and peered out at their little town.

“I looked down into the canyon, and it looks like something out of Dante’s Inferno,” Mr. LaRocca, 47, said. “It’s dark out, but all you see is fire.”

Despite knowing better, Mr. LaRocca got to work trying to save Helltown. The three people in his group, and one other man who was driving around the town, sweated through the night digging fire breaks with an excavator and plunging shovels into the smoldering dirt to put out hot spots.

The next day, he said, friends relieved them, though he was not sure how they managed to get in. “By that time, the whole canyon was burned,” he said. “Helltown was the only sliver that survived.”

His boots were melted and holes were burned into his sweatshirt, but the houses were still standing.

Scott McLean, a Cal Fire spokesman, had empathy for Mr. LaRocca’s desire to save his hometown, but was not pleased to hear about his efforts.

“I understand why they’re doing it,” he said. “It’s not advisable — you will die.”

And the fires this year have moved with a speed and ferocity that can’t be overstated, Mr. McLean said.

Mr. LaRocca said he didn’t know if he would make the same decision again. But he said it was worth it. The old schoolhouse will be there when the smoke clears.

(Please note: We regularly highlight articles on news sites that have limited access for nonsubscribers.) 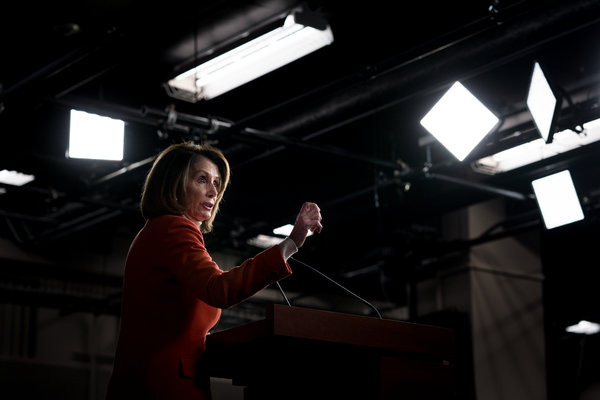 • As Representative Nancy Pelosi, described as the most powerful woman in the history of American politics, prepares to lead the House again, she’ll have to navigate between a rampaging president and her colleagues’ plans. [The New York Times Magazine]

• T.J. Cox, a Democratic challenger from Fresno, pulled within 1,000 votes of Representative David Valadao, a Central Valley Republican known for being moderate. Theirs is among the last House districts considered “flippable.” [The Fresno Bee]

• A federal judge has ordered the Trump administration to resume accepting asylum claims from migrants no matter where or how they entered the United States, dealing at least a temporary setback to the president. [The New York Times]

• Rain in the forecast could trigger another kind of deadly disaster in California’s burn zones: mudslides and debris flows. [The Los Angeles Times]

• What happens to Malibu’s housekeepers, day laborers and gardeners when the houses are inaccessible, in some cases, or burned down? “It’s really difficult,” said one worker. [LAist]

• Mark Zuckerberg fielded questions from Facebook employees on Friday, in the wake of a New York Times investigation into how the company responded to Russian influence operations. He said the idea that Facebook tried to “cover up anything” was dead wrong. [The New York Times]

• Friends and family members of the victims of the shooting at a Thousand Oaks dance hall in which 12 people were killed say the fires ravaging the state have eclipsed the tragedy. [The Los Angeles Times]

• In a state where disaster seems to be never-ending, the question has become whether to stay or go. For one Californian, John Branch, that’s an easy choice. [The New York Times]

• Ramona Ripston, who took the A.C.L.U. affiliate in Los Angeles from “a small, ragtag group of committed activists and built it into a powerhouse,” died this month at 91. [The New York Times]

• Disney’s takeover of much of 21st Century Fox is going faster than expected. The deal has cleared regulatory hurdles in the U.S. and now China. [The New York Times]

• Silicon Valley bros are disrupting bread and raising carbs from the dead. [Eater]

Now that recreational marijuana is legal in California (and is being legalized in more places) brewers are jumping on the cannabis bandwagon, experimenting with CBD and THC in their beers.

But some big-name breweries, like Petaluma-based Lagunitas, might argue that their embrace of cannabis predates the trends. Its copper ale was initially to be called Kronik — a marijuana reference — but the federal government banned a proposed label. This was back in 2002, and Lagunitas named it Censored instead.

And if you think marrying beer and cannabis sounds odd, consider that hops and marijuana both belong to the Cannabaceae plant family, which means they sometimes have similar aromatic signatures.

Read more here about the new beverage blends and why breweries are playing the long game on cannabis.

Suspect being sought after vehicle reported stolen recovered in Hamilton