SAN FRANCISCO — California residents have become accustomed to receiving cellphone alerts about earthquakes and approaching wildfires. But phones lit up across Los Angeles on Tuesday with a different emergency: Coronavirus cases were on the rise after months of remaining steady. The public safety alert, the first time a virus-related one had been sent to the city’s residents, urged those who had symptoms or suspected they had been exposed to head to a testing site.

California recorded its millionth known coronavirus case on Thursday, becoming the second state, after Texas, to reach the grim milestone.

Citing an alarming increase in cases, San Francisco this week banned indoor dining at restaurants and paused a plan to reopen schools. In Los Angeles, thousands of residents have flocked in recent weeks to the parking lot of Dodger Stadium, one of the largest testing sites in the nation. In Sacramento, the number of people hospitalized with the virus has doubled to 158 in the past two weeks. And in San Diego, where rising cases pushed the city to the most restrictive level of the state’s guidelines, indoor activities will be banned as of Saturday in churches, gyms, yoga studios and movie theaters.

“This is one of the most precious, dangerous and fragile moments in our fight against Covid-19,” Mayor Eric Garcetti of Los Angeles said during a briefing this week. “This should be a bright flashing light to all of us to control our behavior, to not do stupid things.”

If California were a country it would have slightly fewer cases per person than France or Brazil but nearly three times the levels of Germany. 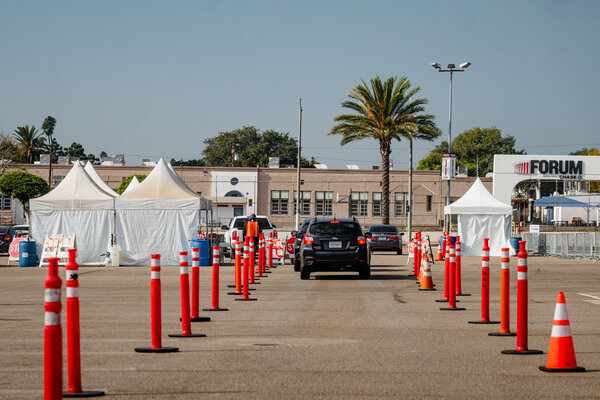 From its early and aggressive lockdown in March to the wave of infections that came after Mr. Newsom reopened the state’s economy in June, California has been whipsawed by the pandemic and the pain imposed on its economy, the country’s largest.

The recent surge has come after months of low infection rates aided by unseasonably hot weather in September and October that allowed Californians to meet outdoors. Experts are concerned that a cold snap now affecting many parts of the state as well as the arrival of winter rainstorms will contribute to a further rise in infections.

When its large population is taken into account, California is 30th in the nation for per capita deaths from the virus and 37th in per capita cases, according to a database by The New York Times.

About 18,000 people have died from the disease in California, the third-largest toll in the country after New York and Texas.

“We’re so huge that this number can make it seem like we’re doing badly — and we are beginning to surge like the rest of the country — but in point of fact we are doing comparatively well,” said Dr. Bob Wachter, a professor and chair of the department of medicine at the University of California, San Francisco. “The Bay Area in particular continues to be this incredible shining star.”

San Francisco has had 153 deaths from the coronavirus since the pandemic began, or 17 deaths per 100,000 residents, one of the lowest rates among major American cities.

[Want to get our daily newsletter California Today by email? Here’s the sign-up.]

But elsewhere in California the picture is more dire. Imperial County, along the border with Mexico, is one of 11 counties now considered to have widespread coronavirus infections. During the summer surge the infection rate became so acute that the county ran out of hospital beds and sent patients across the state. Other counties the state government has classified in the most serious tier include neighboring Riverside County, as well as Los Angeles, Sacramento and San Diego Counties.

More than half of California’s nearly 40 million residents live in counties now under the most restrictive measures for businesses and public gatherings, adding to feelings of fatigue, even anger, among the public.

Some businesses in San Diego County have vowed to defy the new orders.

Dr. Mark Ghaly, California’s secretary of health and human services, acknowledged the resentment and what he called “Covid fatigue” but said: “We know this is hard work but we must do more. The virus is not over just because we are tired of it.”

Even though the sustained decline in hospitalizations of coronavirus patients since late July has reversed, California still has ample room in its hospitals. On Thursday, 3,987 people in the state were hospitalized with the virus, a 32 percent increase from two weeks ago.

Public health officials in Los Angeles County were alarmed on Saturday after jubilant residents flooded the streets when the presidential election was called for Joseph R. Biden Jr. Worried the spontaneous celebrations could become superspreader events, the department of public health posted a notice recommending that celebrations take place over “virtual platforms.”

“Let us remember that no matter how we feel, we all have an obligation to protect each other from Covid-19,” Barbara Ferrer, the county’s director of public health, said in the notice. “Gathering with people outside of your household, especially in settings where people are shouting, chanting or singing and not distancing can easily lead to increased cases of Covid-19.”

In Los Angeles County, case counts have shot up even in communities that have made a priority of controlling the virus. Colleges have pivoted almost entirely to remote instruction in California, allowing only a small fraction of the usual number of students to live in campus housing, where most have been intensively tested.

No matter. At the University of California, Los Angeles — which has closed its campus to all but essential visits and limited dorm occupancy to 5 percent of the normal level — an off-campus Halloween party left 29 students infected and in isolation this week, said Ricardo Vazquez, a university spokesman. At Claremont McKenna College, where campus housing has been closed, health authorities this week emailed students to warn that several of them had tested positive after parties in the nearby Inland Empire.

And at the University of Southern California, where classes, which are all remote, are scheduled to end on Friday, the coronavirus dashboard showed a positivity rate of nearly 8 percent and a spike of 50 new cases among students. U.S.C.’s chief health officer, Dr. Sarah Van Orman, said the flare-up stemmed largely from study groups and other small gatherings in private off-campus apartments. At least one case, however, was a member of the women’s basketball team, whose positive test prompted the quarantine of the entire roster this week.

The virus has underscored the sheer scale of the economic and public health challenge in California. The food program at the Los Angeles public school system, which serves some 700,000 mostly low-income students scattered over more than 700 square miles, has already evolved into the largest school-based relief effort in the United States.

On Monday, Austin Beutner, the Los Angeles Unified School District superintendent, reported that the district had “passed a milestone”: In the nearly eight months since campuses closed for the pandemic, he said, the district had provided 75 million grab-and-go meals to students and their families, along with 10 million other supplies such as face masks and packages of baby wipes and diapers.

The food aid is more than was distributed to the victims of Hurricane Katrina, Mr. Beutner told viewers of his weekly address on Monday. “Twenty dollars,” he added, using a plea once more commonly reserved for nonprofit groups serving the developing world, “will buy a week’s worth of lunches for a hungry child.”

Chris Nestor, the chef and owner of House Kitchen and Bar near the Capitol in Sacramento, said this was the third time his two local restaurants have had to switch to takeout or outdoor-only service. As it is, Mr. Nestor said, he has invested thousands of dollars on indoor retrofitting to comply with health rules and has laid off about 25 employees.

Now the rise in infections will leave House Kitchen and Bar with about eight outside tables, compared with the more than 20 that are usually filled with lunch hour crowds from the city’s now bereft business district, he said.

“And that’s today, with the weather at 50 degrees and the sun out,” Mr. Nestor said with a sigh. “They say it’s supposed to rain tomorrow.”