The US continues to grapple with racial injustice as protests continue in several cities in the wake of shootings. 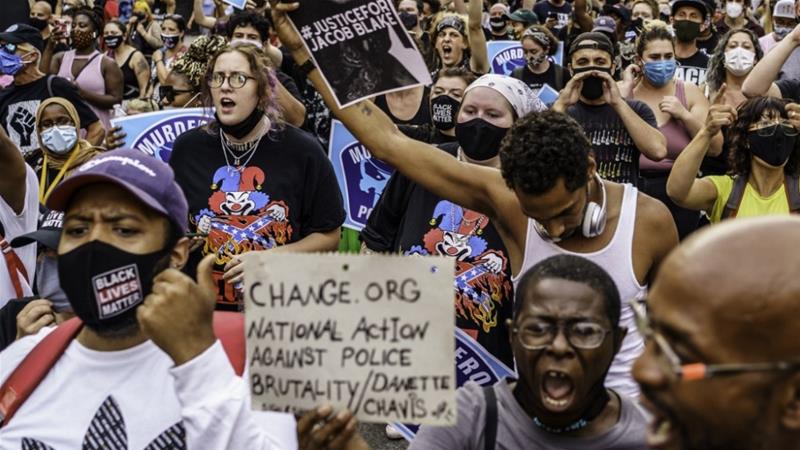 Relative calm returned to Kenosha, Wisconsin, overnight Wednesday into Thursday after two people were shot dead during protests the night before, while unrest in Minneapolis prompted the governor to declare a state of emergency, as the United States continues to grapple with racial injustice.

Kenosha authorities had on Wednesday identified the officer who fired seven shots at the back of Jacob Blake, paralysing the Black man, and sparking anti-racism protests.

After three nights of civil strife – including arson, vandalism and the shootings that killed two people on Tuesday night – calm appeared to take hold in Kenosha.

Violent protests had erupted on Wednesday night in the Midwestern city of Minneapolis, 598km (372 miles) northwest of Kenosha, following the death of a Black homicide suspect who, police say, shot himself.

The governor of Minnesota declared a state of peacetime emergency.

The city has been the centre of protests following the death of George Floyd, a 46-year-old African American man, who died in May after a police officer knelt on his neck for nearly nine minutes.

Floyd’s death and further violence against Black people have led to broader anti-racism protests and demonstrations against police brutality in cities across the US.

Minneapolis Mayor Jacob Frey imposed a curfew following what he described as mass looting of businesses, destruction of property and unrest. Authorities also said misinformation was spread concerning the death of the suspect.

A video posted on social media, which could not be verified immediately by Reuters news agency, showed shots being fired and ransacking of shops.

Police in Portland, Oregon, had on Wednesday declared a demonstration near a US immigration agency building as an “unlawful gathering”, ordering the crowds to disperse. Police said they made 11 arrests in the city which has been the scene of weeks of anti-racism protests and unrest.

Violent protests also erupted in Oakland, California, resulting in the arrests of several people after multiple fires were set during the demonstrations, according to police.

Oakland police said on Twitter a fire was started at the Alameda Superior Court by people who protested in solidarity with Wisconsin demonstrators on Wednesday.

The National Basketball Association (NBA) postponed three play-off games scheduled for Wednesday after the Milwaukee Bucks, protesting against racial injustice, boycotted Game 5 of their play-off series against the Orlando Magic.

NBA players and officials were to meet on Thursday to decide whether the boycott would continue.

Tennis player Naomi Osaka pulled out of the semi-finals of a tennis tournament in Ohio on Wednesday in protest against the shooting of Blake.

Osaka, who has a Japanese mother and a Haitian father and has been a vocal supporter of the “Black Lives Matter” movement, said in a social media post: “Before I am an athlete, I am a Black woman.”