The scrutiny of Covid-19 deaths in New York nursing homes has also put the governor’s aggressive behavior in the spotlight. 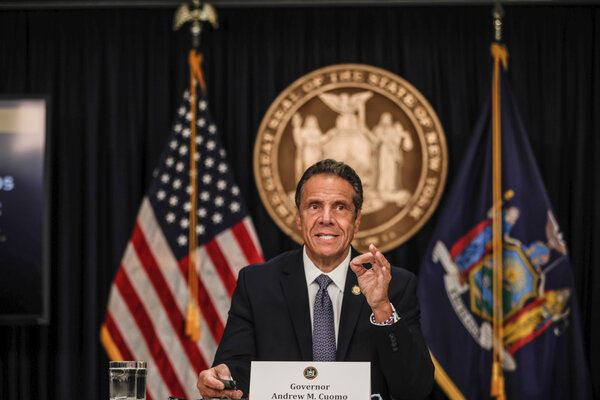 By Jesse McKinley and Luis Ferré-Sadurní

When it was time for the toasts, a guest who worked for the Cuomo administration began with a question: “Who in this room has been yelled at or bullied by Andrew Cuomo?”

Hands shot up across the room, as laughter rolled through the crowd, according to two people who attended the wedding.

The theme suffuses many of Mr. Cuomo’s interactions — accounts in which the governor berated aides and elected officials, brought people to tears and threatened to fire them or end their careers. People outside the governor’s direct control who have clashed with him said he told them they would be subject to negative news stories or political challenges or, in one case, would be publicly likened to a “child rapist.”

After building a reputation as a competent and compassionate leader in the midst of a pandemic, Mr. Cuomo’s standing has faltered over the last month amid revelations that his administration underreported thousands of deaths of nursing home residents. Federal prosecutors are investigating, and lawmakers have moved to strip the governor of emergency powers he has held since the beginning of the coronavirus outbreak.

At the same time, heightened scrutiny is now being cast on a recurrent theme of his decade-long tenure: his penchant for verbal attacks and attempted intimidation. That trait burst into full view last week when a Democratic Assemblyman, Ron T. Kim of Queens, came forward with accusations that the governor had called him while he was home bathing his children and threatened to “destroy” him — urging him to retract negative comments he had made after the nursing home story broke.

During an appearance last week on ABC’s “The View,” Mr. Kim described being deeply rattled by the experience. “He has abused his powers,” Mr. Kim said. “And abusers are cowards.”

Mr. Cuomo’s office has called Mr. Kim a liar, but to many in New York politics, the report rang true, as other accounts of the governor’s aggressive and sometimes unsettling behavior have begun to emerge.

Indeed, in interviews with more than three dozen legislators, political consultants, former state and city officials and New York political veterans, a recurring portrait emerges of Mr. Cuomo: a talented and deft politician whose tendency toward aggression can seem out of step in an age when abusive behavior in the workplace or in professional surroundings is increasingly called out and often censured.

“His primary tool for governing is to create fear,” said Karen Hinton, a communications consultant who worked with Mr. Cuomo when he was housing secretary in the Clinton administration and has since fallen out with him.

Coronavirus testing in the United States: Is it enough to turn the tide?

What Can Be Learned From Differing Rates of Suicide Among Groups

Regina says ‘no’ to mandatory bike helmets for city’s cyclists