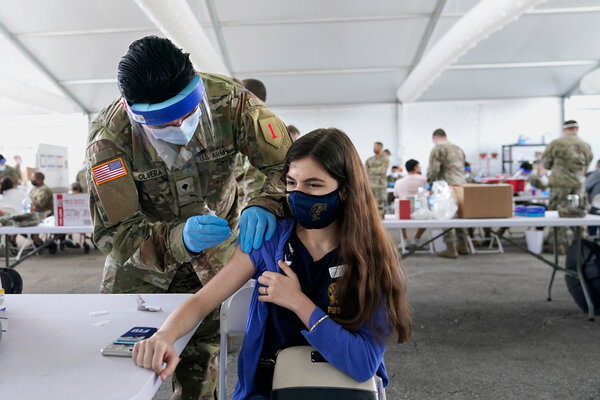 Most U.S. colleges and universities already require on-campus students to show proof of vaccines for illnesses, like bacterial meningitis, that can spread rapidly in close quarters. But Covid-19 is a much more complicated story.

A growing number of schools will require proof of a coronavirus vaccination for on-campus students this fall, including Cornell, Rutgers, Oakland University in Michigan, Brown University in Rhode Island and St. Edward’s University in Texas. Other schools are not requiring vaccines but will offer incentives, such as an exemption from the campus mask mandate.

“Vaccines are our way of ensuring that we can be together for a normal fall semester,” Tom Stritikus, the president of Fort Lewis College in Colorado wrote in a letter to the school.

Many more schools have yet to set a policy, or have explicitly said they would not require proof. And the issue of requiring vaccinations is shaping up to be yet another political debate.

The university’s president and chief executive, George Hanbury, said the Fort Lauderdale-based school was caught off guard, but was reviewing the order. Some Florida counties are working feverishly to inoculate college-age people.

In Ohio, where all adults became eligible for the vaccine last week, Gov. Mike DeWine, also a Republican, announced plans to hold on-campus vaccine clinics. Many colleges in the state have said the vaccines will, at least for now, be encouraged but not mandatory; Cleveland State has said that students living in its dorms next fall must be vaccinated.

“While fewer of our young people get sick from Covid, the evidence clearly shows that they are significant carriers,” DeWine said.

Throughout the pandemic, college outbreaks have led to waves of infections in the surrounding communities. In December, a Times analysis found that deaths in some counties where college students comprise at least 10 percent of the population had risen disproportionately fast. Few of the victims were students; they were mainly older people living and working in those communities.

Mayor Bill de Blasio announced this week that New York City’s schools will no longer have to shut temporarily whenever two unrelated virus cases are detected.

Many parents with children in schools said that the rule disrupted learning and created an environment of daily uncertainty. Schools have closed multiple times, sometimes opening for just a few days at a time. In recent weeks, closures have accelerated as middle and high school students returned after months of all-remote learning.

Epidemiologists and medical experts told ProPublica and the education news site Chalkbeat that New York’s two-case rule was arbitrary and had led to unnecessary closures. They called on the mayor to adjust it. There has been very little virus transmission in the city’s classrooms since they reopened last fall.

“The way to beat Covid is not by closing schools excessively, but by suppressing transmission both inside and outside of schools,” Dave A. Chokshi, the city’s health commissioner, said during a news conference on Monday.

Michael Mulgrew, president of the United Federation of Teachers, has strenuously opposed any changes to the rule for months. But he now has diminished leverage in the negotiations, in part because teachers have been eligible for a vaccine for nearly three months.

The mayor has not yet explained what new guidelines will replace the two-case rule. Our colleague Eliza Shapiro reported that negotiations about a replacement policy between the city’s teachers’ union and City Hall had stalled.

Trump, coronavirus and the politics of a pandemic