Home » Americas » Can Joe and Mitch Get It Done?

WASHINGTON — In late July 2011, with an economy-shaking Treasury default only a few days away and Congress flailing, Senator Mitch McConnell received a Saturday phone call from Joseph R. Biden Jr., then the vice president.

“I think it’s time we talk,” Mr. Biden told Mr. McConnell, Republican of Kentucky, who was then the minority leader.

That opening, recounted by Mr. McConnell in his memoir, “The Long Game,” initiated the second in a series of one-on-one tax and budget negotiations that produced agreements that rescued the government from imminent fiscal disaster while drawing mixed reviews from fellow Democrats.

President-elect Biden could be making a lot more of those phone calls in the years ahead.

Unless Democrats pick off two Senate seats in Georgia to be decided in runoff elections on Jan. 5, Mr. Biden will have to navigate a Senate narrowly controlled by Mr. McConnell, who has happily turned the chamber into a graveyard for Democratic legislation. The likelihood of a Senate under Republican rule severely constrains Mr. Biden’s legislative and personnel agenda from the start, dashing the hopes of those anticipating a post-Trump opening for bold initiatives on health care, taxes and the environment and an administration populated by progressive icons.

Yet as much as anyone across the aisle, Mr. Biden — as garrulous as Mr. McConnell is aloof — has a close relationship with the Senate leader and a track record of working with him to strike bipartisan deals. The Kentuckian has described Mr. Biden not only as someone he liked, but also as a man of his word who understands how congressional negotiations work and who knows how to give as well as take.

“He doesn’t waste time telling me why I am wrong,” Mr. McConnell said in a bipartisan parting tribute in 2016 as Mr. Biden presided over the Senate. “He gets down to brass tacks, and he keeps in sight the stakes. There’s a reason ‘Get Joe on the phone’ is shorthand for ‘time to get serious’ in my office.”

“My memory is that they actually get along reasonably well,” said Rohit Kumar, who as deputy chief of staff to Mr. McConnell sat in on the three Biden-McConnell negotiations from 2010 to 2013. “They have a lot of respect for one another. It helps that they speak the same language. They are senators.”

But much has changed in the Senate in the four years since Mr. Biden left public office, and even more in the decade since he left the chamber, where relations between the two parties are now bitter and hostile and Mr. McConnell has abandoned legislation in single-minded pursuit of the confirmation of conservative judges. When Mr. Biden suggested during the campaign that he could work with his old friend Mitch, many Democratic senators scoffed and said Mr. McConnell would eat Mr. Biden’s lunch. And by Sunday afternoon, 24 hours after Mr. Biden had been declared the victor, Mr. McConnell still had yet to issue a statement congratulating the president-elect. 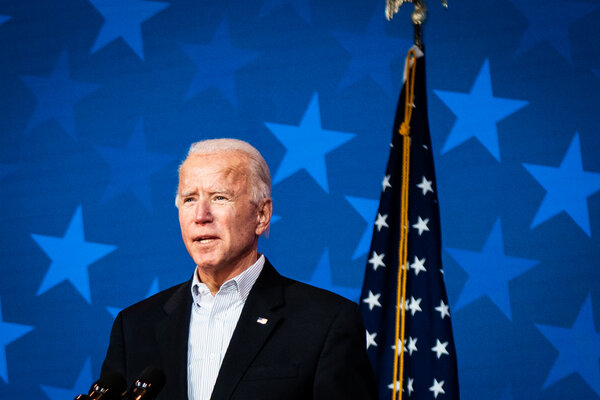 Mr. Biden’s allies say he is far from naïve about the state of the Senate and Mr. McConnell’s track record. He was, after all, part of the Obama team whose initiatives were opposed in almost blanket fashion by a man who declared his chief objective was to make Barack Obama a one-term president. Mr. McConnell’s deep-seated resistance peaked with the refusal to even consider Mr. Obama’s nomination of Judge Merrick B. Garland to the Supreme Court in 2016. But colleagues say that Mr. Biden is not the sort to surrender before the battle begins.

“Joe Biden is well aware that Mitch McConnell was an obstructionist who blocked most of the priorities of the Biden-Obama administration and who used his position to block a whole range of judicial nominees,” said Senator Chris Coons, Democrat of Delaware, who occupies the seat previously held by Mr. Biden and is close to the incoming president. “But he also knows there are certain moments when you have to try.”

Democrats are not giving up on taking the majority and see the two Georgia seats as winnable in a culturally and demographically transforming state. But they say if they are stuck with Mr. McConnell as majority leader, the question of how he and Mr. Biden mesh is in many respects up to Mr. McConnell and what he determines is politically advantageous for him and his troops.

For now, Mr. McConnell is not talking, declining interviews during a delicate period when President Trump has resisted the election results and control of the Senate remains unclear. Members of both parties and Mr. McConnell’s allies say he will be influenced by the contours of the 2022 election map and whether he wants to cement a legacy beyond the determined judicial push that placed more than 200 judges on the federal courts, including three Supreme Court justices. Mr. McConnell has recently declined to directly negotiate with Democrats at all, delegating pandemic talks to the Trump administration.

Another factor, senators say, will be how much control Mr. Trump tries to exert over Republican politics, whether he resorts to trolling Republicans to deter them from trying to reach agreements with the new administration. But with Mr. Trump gone from the White House, Mr. McConnell instantly becomes the most influential Republican in the capital, and he will want to use that influence.

With a razor-thin majority at best in a chamber that functions on consensus, Mr. McConnell is not all-powerful, and the slippage of just a few Republicans could complicate his life. If thwarted by Mr. McConnell, Mr. Biden is likely to try to put pressure on him by reaching out to more potentially amenable Republicans, beginning with Senators Susan Collins of Maine, Lisa Murkowski of Alaska, Mitt Romney of Utah and others in the party who have been frustrated by the lack of legislative activity in the chamber.

“Joe has a lot of good relationships,” said Ms. Collins, newly empowered by a victory many on both sides of the aisle saw as unlikely. “I think there is a real hunger for the Senate to begin debating legislation and start getting things done, and vote, and have philosophical decisions made on the floor.”

With the Senate focused on judges for much of the past four years, a backlog of bipartisan bills already exists on health care, among other issues. Though the scope of legislation would be much reduced under Republican control, senators said they could envision deals on public works projects, prescription drug costs and some elements of immigration law, including extending protections for the so-called Dreamers as well as the handling of visas for highly skilled workers.

All anticipate that the continuing response to the pandemic — both from a health and economic perspective — will dominate the legislative agenda for the foreseeable future.

The test of how a Republican Senate and a Biden administration interact will come quickly with Mr. Biden’s need to fill a cabinet. Holding the majority, Mr. McConnell will essentially wield veto power over the choices since he can decide which to bring to the floor. In decades past, senators granted a new president wide discretion in his picks, but the confirmation process in the Senate has become a partisan battleground, and some Democrats refused to vote for any of Mr. Trump’s choices. Some Republicans might want to return the favor, though they also realize national security positions and other top posts must be occupied.

“The vice president deserves a cabinet,” Senator Lindsey Graham, the newly re-elected Republican of South Carolina, said on Friday, though he added that he would not support nominees he considers unqualified or extreme. “I will give him my input about who I could vote for secretary of state, attorney general.”

One area where the Biden administration should anticipate tough going is the courts. Mr. McConnell just spent four years filling court vacancies with carefully vetted conservatives. He is unlikely to be in a hurry to dilute their ranks by rushing Democratic picks on to the bench to counter them.

While Democrats are hoping Mr. Biden brings his deal-making prowess to the job, that was not always the case when it came to his talks with Mr. McConnell.

Though they ultimately supported it, Democrats were furious over Mr. Biden’s uninvited intervention in a showdown in late 2012 over the “fiscal cliff” looming from the impending expiration of President George W. Bush’s tax cuts.

Many believed Mr. McConnell outfoxed him when Mr. Biden agreed to extend the tax cuts except for income above $450,000 — an outcome Mr. Biden portrayed as persuading Mr. McConnell to raise taxes by $600 billion, but which progressives believed was far too generous to wealthy taxpayers. Democrats complained that they received little in return, and that the agreement hamstrung them for years in trying to generate new sources of revenue.

“That was a great deal for Mitch McConnell and a terrible deal for America,” Senator Michael Bennet, Democrat of Colorado, shot back at Mr. Biden during a presidential primary debate last June when Mr. Biden gloated about the agreement.

Yet Mr. Kumar, the former McConnell aide, said he believed the Republican advantage on that bargain had been exaggerated over the years — a view that Democrats must hope is true if they are now counting on Mr. Biden to find common ground with Mr. McConnell.

“The truth of the matter is we thought we got a good deal,” said Mr. Kumar, now a senior official at the national office of PwC in Washington. “But we didn’t think we had run the table.”