Home » Americas » ‘Can’t Compete’: Why Hiring for Child Care Is a Huge Struggle 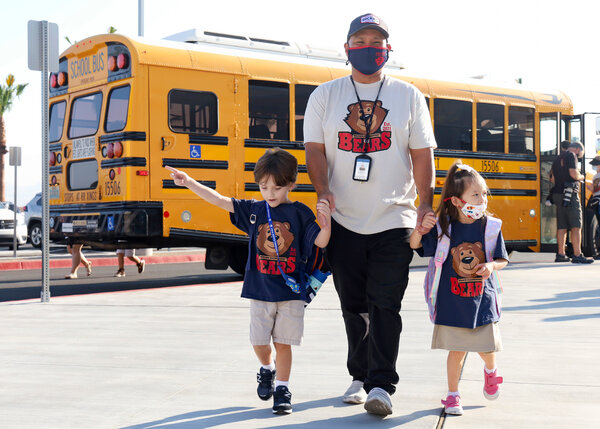 At a Y.M.C.A. in San Antonio, 200 children are on wait lists for child care because of hiring problems. It raised average hourly pay for full-time workers to $12.50 from $10, but still can’t recruit enough teachers to meet the demand.

In Ann Arbor, Mich., the school district had announced it was shutting down its after-school program. It managed to hire people to open at five of 20 elementary schools, those most in need, but that left out at least 1,000 children.

And in Portland, Ore., preschool spots are few and far between, and elementary schools are running after-school care at limited capacity or have canceled programs altogether.

Schools have largely reopened this fall, but life is far from normal for parents of young children. One reason is that child care — for children too young for school, and for the hours before and after school — is operating at 88 percent of its prepandemic capacity. Even before the pandemic, child care did not cover everyone who needed it.

The shortage is partly because of the pandemic. Some centers went out of business after lockdowns early on. Because children under 12 are not yet eligible for vaccines, many programs are enrolling fewer children to limit potential exposure. But the biggest reason for the shortages, child care providers across the country said, is they can’t find people to hire.

Eight in 10 providers said they were experiencing a staffing problem, and half said hiring was harder than it had been before the pandemic, according to a survey over the summer of 7,500 of them by the National Association for the Education of Young Children. Half said they were serving fewer children as a result of hiring problems, and a quarter had reduced their hours. The lack of child care is also contributing to other labor shortages, because many parents who can’t find reliable child care can’t return to work.

“The only thing we haven’t done is sandwich boards and standing on the corner with a spinning sign, but I’m not eliminating that yet,” said Claire Miller, the director of children and youth services for Decatur, Ga., which has raised wages by $2, asked parents for referrals and offered college students internship credits.

The city is offering 600 slots for children, down from 800. Ms. Miller said it was “an awful feeling, certainly, because we promised parents we had them covered.”

Child care providers face challenges like those in many other service industries that are unable to find enough workers — low pay and little job stability. The median hourly pay is $12, and 98 percent of occupations pay more, according to data from the Center for the Study of Child Care Employment at the University of California, Berkeley. Turnover is high in early childhood education, and jobs caring for school-aged children are only a few hours a day and often end in the summer.

Child care has additional challenges. Some people are hesitant to work with unvaccinated children. The job requires more qualifications, including background checks, certifications and even college degrees in some areas, than the stores and restaurants that are paying more.

Yet child care centers have not responded the way some other industries have — by significantly raising wages and expanding benefits. That’s because of a math problem with the business model.

In the United States, child care for children younger than 5 and before and after school is mostly financed by private tuition. Yet more than 60 percent of families are already paying more than they can afford, according to a report published Wednesday by the Treasury Department. (The Department of Health and Human Services considers child care affordable if it costs families no more than 7 percent of their income.)

Also, the cost of child care increased by half during the pandemic because of new health regulations, including additional staff to keep small groups of children in stable cohorts. States limit the number of children per teacher, so providers can’t bring in more tuition without hiring more workers.

“The free market works well in many different sectors, but child care is not one of them,” Treasury Secretary Janet Yellen said Wednesday, speaking about the Biden administration’s spending proposals for education and child care.

“Those who provide child care aren’t paid well, and many who need it can’t afford it,” she said. The Biden plan would make preschool free starting at age 3, subsidize child care before then and raise the minimum wage for child care workers to $15 an hour.

In the national survey of 7,500 providers, 78 percent said low wages were their main recruitment challenge. Heather Mossefin, the owner of Heather’s Family Home Child Care in Clyde, Ohio, raised wages to $9 an hour, then $9.25, 45 cents above minimum wage.

“I can’t compete with sign-on bonuses and paying $20 an hour at the amusement park,” said Ms. Mossefin, who provides care for children from infancy through age 12. “Even fast-food places are hiring at $12 to $15 an hour here. I can’t because I can’t raise prices on my parents because we are all hurting.”

Last week, she lost an employee to an automotive factory. She has decreased the number of children she cares for by one-third, to 12, and says she’s working much more than full-time herself.

She took home $18,000 last year after paying her bills and employees’ wages. This year — with lower attendance, an additional $4,500 spent on cleaning supplies and the $1,000 she spent on Indeed trying to hire — she expects to earn $14,000. Full-time tuition for a toddler is $756 a month, and she recently raised it about $4 a week. But she knows her clients, who mostly work at the local Whirlpool plant or fast-food restaurants, can’t pay more than that.

“I get it, I was a single mom,” she said. “It’s just something that my town needed.”

The pandemic threatened to break an already fragile child care system. Centers that managed to reopen after lockdowns struggled at first with low enrollment — many parents weren’t comfortable sending children back. Workers have not always received masks and other protective gear, health care or hazard pay.

“You have a situation where workers were already struggling, and then they’re placed under just immense pressure to work, with not only a lack of resources but a lack of concern and respect people have for child care workers’ well-being,” said Lea J.E. Austin, executive director of the Center for the Study of Child Care Employment at the University of California, Berkeley.

Now that parents want to return to child care, they can’t find it, leaving some without full-time coverage for the third school year in a row.

When the Ann Arbor schools canceled after-school care over the summer, Alicia R. Ventresca Miller, an assistant professor of anthropology at Michigan, panicked. She had already delayed her tenure application a year when schools first closed, and was counting on having time to write a book this year. Her partner, a lecturer, had scheduled afternoon classes.

“I recognize I’m in a position of privilege and I have a schedule that could be forgiving, but I need this,” she said.

She found a few short-term after-school classes for their 6-year-old son, but most days she or her partner picks him up at 3:15 p.m. After that, the workday is over — he needs to be bathed, fed and supervised.

Child care providers say that when it comes to working with children, hiring standards can’t be lowered. So for some, the crisis is compelling them to improve child care jobs, at least temporarily — many have used the industry’s federal pandemic relief funds to do so.

“I do not want to just have a warm body in front of a child who needs that time and attention,” said Tony D’Agostino, who owns Inspire! Crayon Campus in the Rochester, N.Y., area. He raised the starting wage to $13.50 and added paid time off, health insurance and training for teachers to advance.

Still, he has 15 jobs open across three preschools.