Americans looked on in shock Wednesday as a calm protest turned into an angry mob that swarmed past barriers and stormed the Capitol — spraying officers with chemical agents, breaking windows and doors and looting sizable objects — as the Capitol Police struggled to contain the violence and sometimes simply retreated.

The police force, which numbers about 2,000 officers and has sole jurisdiction over the Capitol’s buildings and grounds, was clearly outnumbered and unprepared for the onslaught, even as it was openly organized on social media sites like Gab and Parler.

It took more than two hours, and reinforcements from other law enforcement agencies, before order was restored. One woman who appeared to have wrapped herself in a flag was fatally shot by a Capitol Police officer, according to Robert Contee, chief of the city’s Metropolitan Police Department, which was called in for backup. Another woman and two men died during the events because of as yet unspecified medical emergencies, he said.

At least 52 people were arrested, he said, including five on weapons charges and at least 26 on the grounds of the U.S. Capitol. Most of the arrests were for violating the 6 p.m. curfew, he said, adding that the police would circulate pictures of those sought for breaching the Capitol building. In addition, pipe bombs were found at the headquarters of both the Republican and the Democratic National Committees and a cooler containing a long gun and Molotov cocktails was discovered on the Capitol grounds, the chief said.

The criticism of the Capitol Police was swift and, in some quarters, unforgiving.

Some law enforcement experts were astonished by the sight of an officer cowering in the crush of pro-Trump extremists and rioters using police shields and metal barricades as battering rams. 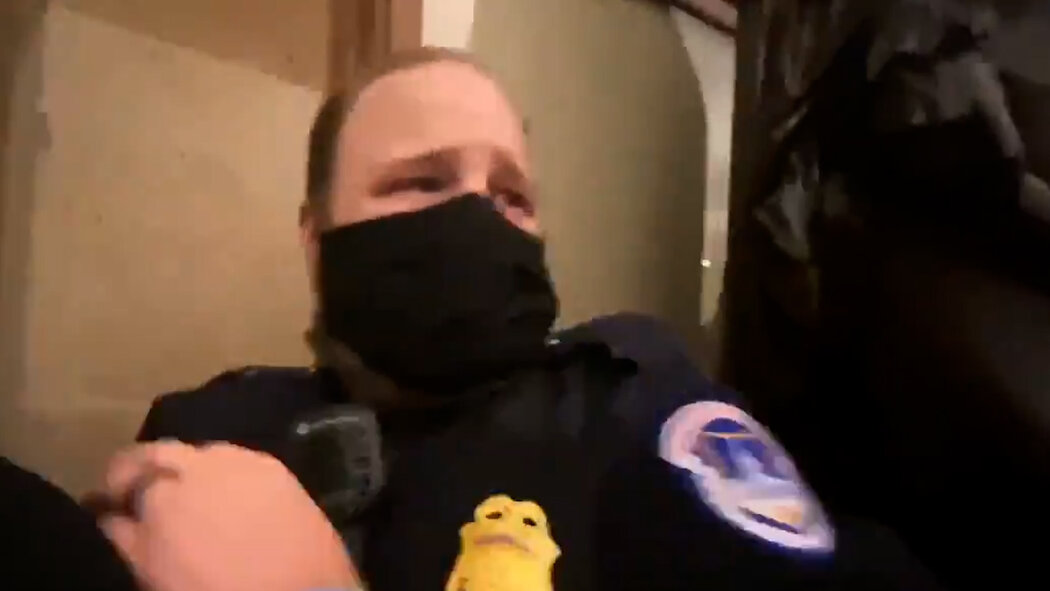 And protesters on the left saw a stark double standard, saying they had been hit with rubber bullets, manhandled, surrounded and arrested while behaving peacefully during demonstrations against racial injustice over the summer.

Attica Scott, a state representative in Kentucky, was arrested in Louisville on felony charges that were later dropped during the many months of protest over the death of Breonna Taylor in a botched police raid. “You can be arrested for walking while Black,” she said, “but you can be white and riot and basically get away with it.” 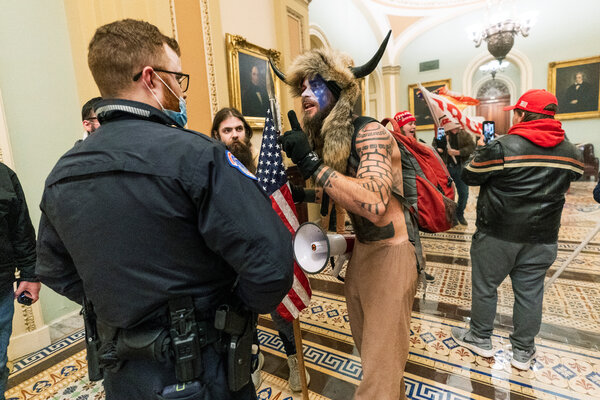 President Trump’s own rhetoric has included stark contrasts toward protests. After George Floyd’s death, he called demonstrators “thugs” and promised that those who got out of line near the White House would be met with “the most vicious dogs, and most ominous weapons, I have ever seen.” Federal law enforcement officers swept people into unmarked vans and used pepper spray to clear peaceful protesters so that Mr. Trump could pose for photos in front of a church.

But on Wednesday, after he gave a rally where he said he would “never concede,” he was far kinder to those who proceeded to storm the Capitol. Hours after the riot began, he finally posted a video saying, “You have to go home now.” He added, “We love you.”

After the rally, at around 1 p.m., crowds amassed at the temporary perimeter fence that had been set up around the Capitol, and grew increasingly animated. “There was a noticeable change in their demeanor,” Chief Contee said.

One policing expert said there should have been a heavily manned perimeter sealing off the entire Capitol grounds and a second around the building itself given that extremist groups with a history of violent confrontations were involved.

“How they were not ready for this today, I have no idea,” said Charles Ramsey, a former D.C. police chief. “They were overwhelmed, they did not have the resources. You have to be able to protect the Capitol. That is not OK.”

The Capitol Police did not answer the phone or email, or put out any statements about the incident.

Members of Congress demanded explanations as well. “We must investigate the security breach at the Capitol today,” said Representative Maxine Waters, a California Democrat, on Twitter. “I warned our Caucus and had an hour-long conversation with the Chief of Police 4 days ago. He assured me the terrorists would not be allowed on the plaza & Capitol secured.”

Representative Val Demings, a Florida Democrat, said in an interview with MSNBC on Wednesday night that the Capitol Police appeared understaffed. “It did not seem that they had a clear operational plan to really deal with” thousands of people who descended on the Capitol after Mr. Trump’s complaints of a “rigged election,” she said.

Mr. Ramsey said police officers in riot gear should have been stationed nearby. 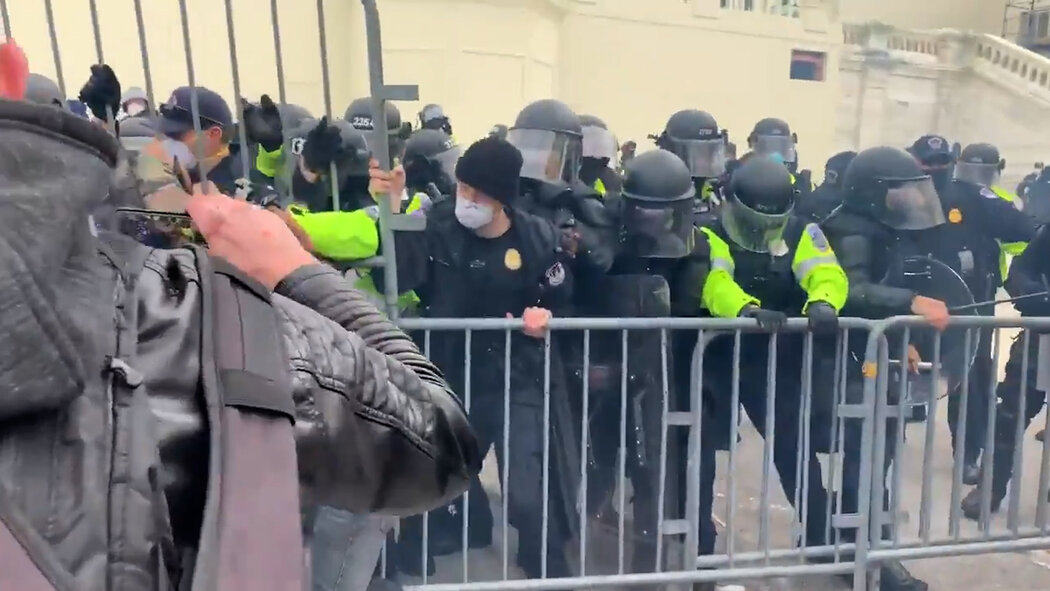 The officers at the perimeter were easily overwhelmed, with the crowds — some in body armor — jostling them and spraying them with chemical plumes. On the east side of the Capitol, the rioters who broke through the perimeter then confronted a line of officers on the steps, a video shows. Those officers eventually retreated up the stairs, allowing the crowd to follow. 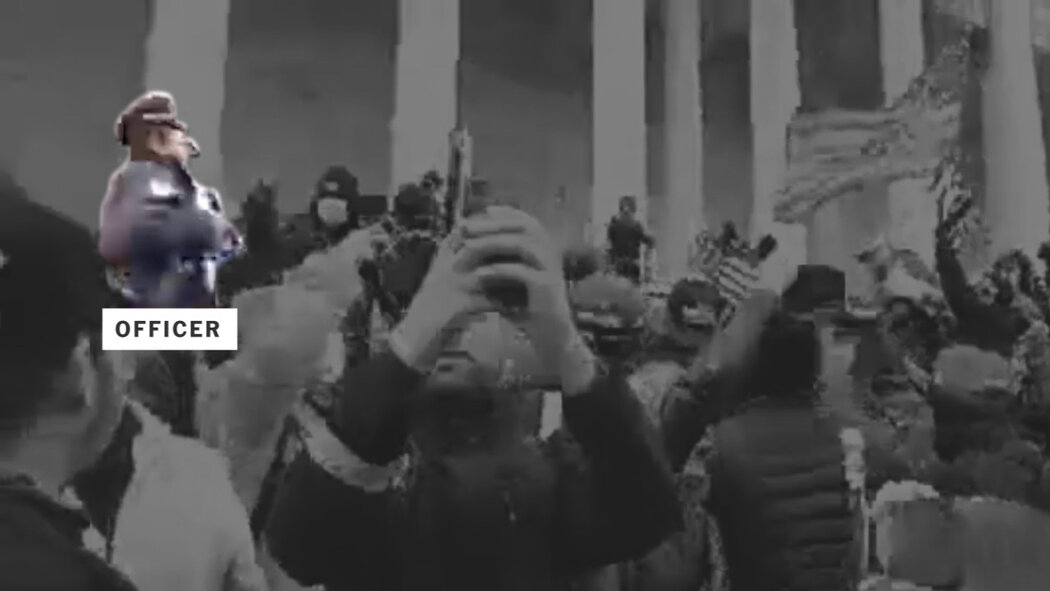 Another video shows officers appearing to move the barricades aside and let the protesters in. Protesters scaled walls and scaffolding, hoisted themselves up on a maintenance platform, posed for photos and vandalized office signs.

Some experts defended the police, noting that the Capitol Police deals with protests, both inside and outside the building, legal and illegal, on a regular basis, but they are nothing like this.

“This isn’t what happens at the U.S. Capitol,” said Chuck Wexler, the executive director of the Police Executive Research Forum, a think tank in Washington. “This is completely unprecedented. This is as close to a 9/11 attack as you can think of, in that no one has ever done this before.”

Mr. Wexler said legitimate questions would be raised about why more officers were not on hand and why they did not anticipate the threat. But he laid most of the blame on political leaders who legitimize violent groups. “If the president tells his supporters, ‘This is what I want you to do,’ that could be more valuable than a thousand cops,” he said.

Chief Michel Moore of the Los Angeles Police Department said it was unrealistic to expect the police to quell “people who are hell bent on destruction.”

“They used violence against police. They attacked the sacred Capitol and the Rotunda and then used tear gas or chemical agents, and physical attacks,” he said. “And what troubles me is the first thought was, well, why wasn’t the law enforcement better prepared?”

If the Capitol Police did not anticipate violence, the city did. Mayor Muriel Bowser called in the National Guard to supplement the city’s police force and warned counterprotesters and D.C. residents to stay away from planned pro-Trump actions on Tuesday and Wednesday.

On Monday, the city police arrested Enrique Tarrio, the leader of the Proud Boys, a far-right fraternity that uses street thuggery as political theater. Mr. Tarrio, who had two high-capacity firearm magazines, was wanted after bragging online about burning a Black Lives Matter banner taken from a historic Black church during protests last month. He was released but ordered to stay out of D.C.

The Proud Boys have been beating the drum for months for confrontations in support of Mr. Trump. In a statement on one of their social media channels after the storming of the U.S. Capitol, the Proud Boys attempted to justify the violence by saying that they were only copying the tactics of leftist protesters.

But Ja’Mal Green, a Chicago-based activist, said there was no comparison between the tactics or the response. “We all know if Black Lives Matter would have stormed the Capitol, there would have been deadly force used to protect that building, especially because it’s a federal building,” he said. “We today saw what it means for white people to have the privilege.”

Trump's vaccine team will not brief Biden administration: US senators