Authorities said it was not immediately clear if the demonstrators, one who was critically wounded, had been targeted. 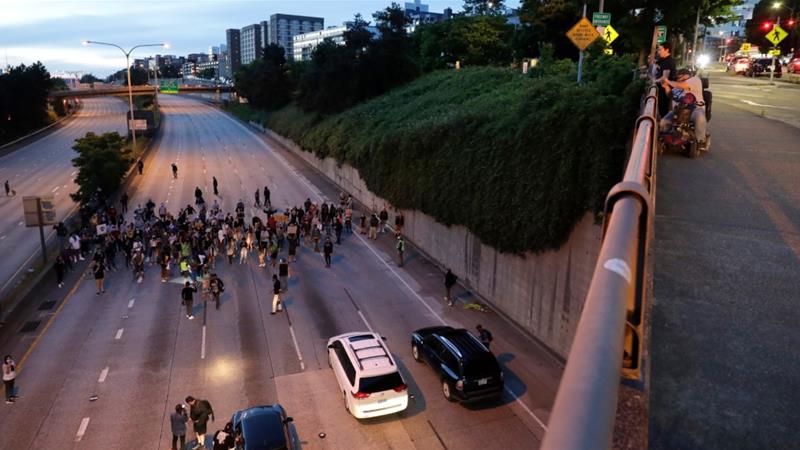 Two women have been struck by a fast-moving car with one critically injured after a driver sped through a protest-related closure on a freeway in Seattle.

The driver, a 27-year-old man from Seattle, was taken into custody, Mead said. The man’s motive was not immediately clear although impairment was not considered a factor.

It was also not clear where the driver entered the highway, which had been shut amid continuing protests in the city calling for racial justice. Such demonstrations have been common across the United States since the May 25 killing of George Floyd after a police officer kneeled on his neck for nearly nine minutes.

Mead said the unnamed man faced multiple felony charges and was suspected to have driven the wrong way on an exit ramp.

Police said protesters had been on the freeway for more than an hour before the car drove around the blockade at around 1:36am.

Video posted on social media, taken from a nearby overpass, showed a white car travelling at high speed and navigating around two vehicles positioned across the lanes of the highway as a barrier. The vehicle careened into a small crowd of protesters, striking the two people who flew into the air.

This was a purposeful attack, plain and simple. Pray the driver is brought to justice. #seattleprotests pic.twitter.com/yEyeDYP2kH

The pair landed on the ground several metres away.

Twitter user Larry Subramanian, who captured a video of the incident, wrote in a post: “Please pray for the victims of this cowardly and senseless attack. They were peaceful protesters. This is terrible.”

Protesters had shut down the interstate highway for 19 days in a row, Mead said at a news conference on Saturday, adding the freeway is “simply not a safe place” for pedestrians. He said he hoped demonstrators would cease what he called “unlawful behaviour”.

“My hope is, as a result of this tragedy, protesters will reconsider their desire to be on the interstate because I cannot guarantee their safety – plain and simple,” Mead said.