CHICAGO — Another killing by a police officer. Another emotional mayor trying to soothe the city. Another burst of protests, vows for change, pleas for calm.

To Kristian Armendariz, a resident of the neighborhood where 13-year-old Adam Toledo was fatally shot in an alley in March, Chicago is living through a nightmare on repeat.

“This has been going on for decades,” he said. “This thing is going to keep happening.”

Chicagoans reacted with horror and grief to body-camera video released on Thursday that showed the killing of Adam Toledo in the early-morning hours of March 29. In the video, Adam is chased down an alley by a police officer, who orders him to stop and show his hands. An analysis of the video, slowing down events that took place in the space of a second, shows the teenager then appearing to toss a handgun nearby and raise his hands in the air, just before the officer shoots him in the chest.

Adam, a seventh grader from Little Village, a neighborhood on the city’s West Side, was one of the youngest people killed by the police in Illinois in years.

For Chicagoans who are still pained by the shooting death of Laquan McDonald by the police in 2014, Adam’s death renews the anguish, particularly in heavily Black and Latino neighborhoods where residents have long said they are unfairly targeted by the police. It took city officials more than a year to release police video of the shooting of Laquan, a Black 17-year-old who was shot 16 times by a white police officer along a Chicago street. 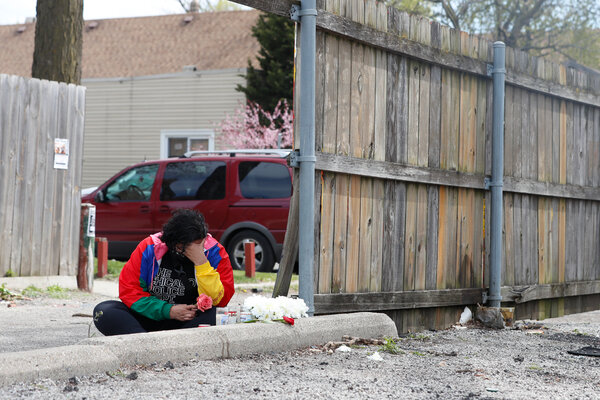 Ms. Lightfoot, who won all of Chicago’s 50 wards when she was elected in 2019, has become a target of sharp criticism in the wake of Adam’s death, just as Mr. Emanuel had been in 2015. A former federal prosecutor who campaigned on a platform of anti-corruption, police reform and revitalization of Chicago’s neighborhoods, Ms. Lightfoot called for a revised foot-pursuit policy for the department but so far had failed to deliver on one of her most prominent promises: a civilian oversight commission for police.

“She advocated for this when she was a candidate, and community coalitions have been catalyzed by her call for this for years,” said Cara Hendrickson, the executive director of BPI, a law and policy center in Chicago. “We’ve not had the breakthrough in transforming policing in Chicago that we need to have. While I think the department has made incremental changes, the Chicago Police Department is failing.”

The Chicago Police Department is the second-largest municipal police force in the United States, with 12,000 sworn officers, and has long been criticized for rarely disciplining officers who are accused of misconduct.

At a large rally in the Logan Square neighborhood on Friday evening, protesters called for defunding the police and enacting measures like rent control. At the mention of Ms. Lightfoot by one of the speakers, the crowd booed loudly.

“Our goal is to not let people forget and keep being active,” said Maximo Rodriguez, who said he had worked in social justice causes since 1985, when he was a college student in Chicago. “The problem isn’t us, it’s the police. Whenever they’re around, there’s a chance for violence.”

Many people in Chicago are now calling for a swift investigation into Adam’s death.

One inquiry has been underway for weeks, conducted by the Civilian Office of Police Accountability, an independent agency that investigates police shootings in Chicago. But that process will take months, said Andrea Kersten, chief of investigative operations for COPA, who noted that the agency was on the scene within an hour of the shooting.

“There is no deadline for completion of an investigation,” said Ephraim Eaddy, a spokesman for the agency. “As it is today, we are really only 18 days in. To say that we have come to a conclusion would be premature.”

The officer who shot Adam, Eric E. Stillman, has been placed on administrative leave. The Invisible Institute, a nonprofit that collects officer complaints and other police data in Chicago, said that Officer Stillman has had four use-of-force reports and three complaints filed against him since 2017, but none resulted in discipline.

Bennett Capers, a law professor and the director of the Center on Race, Law and Justice at Fordham University, said that prosecutors were responding more frequently to public demand that police officers be charged with crimes in use-of-force incidents.

The trial of Derek Chauvin, the former police officer who was charged with murder in the death of George Floyd, is underway in Minneapolis. Earlier this week, another Minnesota police officer, Kimberly A. Potter, shot and killed Daunte Wright, 20, during a traffic stop; she was charged with second-degree manslaughter three days later. The officer who shot Laquan McDonald, Jason Van Dyke, was convicted of second-degree murder in 2018, the first police officer to be convicted of murder in an on-duty shooting in Chicago in nearly 50 years.

Charging Officer Stillman would be “difficult but not impossible” for prosecutors, Mr. Capers said.

“Obviously the police were saying that the kid had a weapon, and tossed the weapon, and all of this happened in a split second,” he said. “Are we really saying that an officer is entitled to shoot anybody who is holding a gun?”

A lawyer for Officer Stillman has said that the shooting, while tragic, was justified given the nature of the threat. “The police officer was put in this split-second situation where he has to make a decision,” the lawyer, Timothy Grace, said.

Representative Jesus Garcia of Illinois said that he had spent time in recent days thinking about his own experiences growing up in Little Village, raising a family there and working in violence prevention efforts in the neighborhood, which has been plagued by gang warfare.

“Adam and so many other kids have died because of gun violence and gang violence,” he said. “There’s no justice for Adam, because his life has been taken away. Nothing is going to bring him back. We’re all guilty, in a sense, as a community, as a society, for allowing his situation and not seeing the danger signals that this young man needed help.”

Adam’s family has kept a low profile, asking for privacy and urging protesters to remain peaceful.

“The Toledo family implores everyone who gathers in Adam’s name to remain peaceful, respectful and nonviolent and to continue to work constructively and tirelessly for reform,” the family said in a statement on Friday. “The family is forever grateful to the leaders and members of Chicago’s Latino community and the residents of Little Village for their support in this time of grief and mourning.”