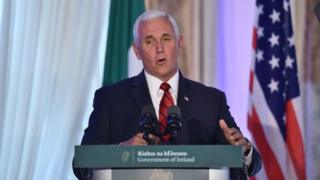 Mike Pence spent this week meeting US allies in Europe but a row over his stay at one of President Donald Trump’s hotels and questions about his stance on gay rights caused a distraction on the vice-president’s tour.

Here’s what happened on his whistlestop trip of Poland, Ireland, Iceland and the UK, which proved that American politics definitely does not stop at the water’s edge.

The main purpose of Mr Pence’s visit to Ireland, the White House said, was to show US support for the peace process in Northern Ireland, now under sharp focus in the Brexit debate.

But almost as soon as he landed he was facing criticism over his choice of accommodation.

For the visit, Mr Pence stayed in Doonbeg, an Irish village with a population of less than 1,000 at a golf course hotel owned by the president’s company.

The hotel required a 181 mile (292km) cross-country flight to Dublin, where Mr Pence held meetings with the Irish government.

When first asked about Mr Pence’s stay in Doonbeg – and if cheaper options had been explored – the vice-president’s chief of staff Marc Short told reporters that Mr Trump had suggested it.

Noting “political attacks from Democrats” regarding the decision, Mr Pence later said the choice was made because of his family ties in the area and that it was needed to accommodate his security detail.

Mr Trump said he had “no involvement” in the decision, adding: “People like my product, what can I tell you? I can’t help it.”

On Friday, the Democratic-led House Oversight Committee announced they would be launching an investigation into Mr Pence’s stay as well as “multiple efforts by the President, Vice President, and other Trump Administration officials to spend taxpayer funds at properties owned by the President”.

The US constitution bars presidents from taking any salary or profit from any source beyond the presidential salary. Mr Trump does not take his presidential salary, choosing to donate it instead, and has said there is no violation if he is only paid by the government for services rendered at his properties.

Mr Pence also faced ridicule after a senior White House aide suggested that his lunch with Irish Prime Minister Leo Varadkar and his partner proved that the vice-president is not “anti-gay”.

LGBT advocates were not won over.

We can't believe we have to say this but simply meeting with a gay person doesn't erase Pence's long history of attacking LGBTQ people through policy, legislation, and rhetoric. Nice try though.

Mr Pence has a history of supporting anti-LGBT policies, signing a religious freedom law as governor of Indiana that would allow businesses and individuals to discriminate people based on sexuality. Following outcry, he later signed an amended version.

Despite the controversies, the vice-president maintained a calm exterior, speaking warmly of his Irish heritage and offering greetings from Mr Trump.

Icelanders said the move was out of step for a country of just 350,000 people that is frequently ranked the most peaceful in the world.

“The scale of Pence’s visit, not least the security arrangements, are greater than ever seen in Iceland before,” said RUV, Iceland’s national broadcast service.

The scope of the vice-president’s security demanded local adjustments. 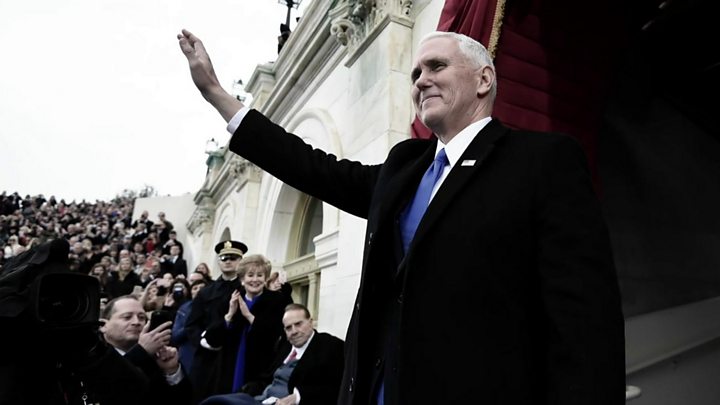 According to the Associated Press, the Reykjavik Metropolitan Police requested backup from neighbouring towns and villages to gather the manpower required by Mr Pence.

US authorities also needed special permission to carry firearms, as the elite “Viking SWAT” team members are the only Icelandic forces allowed to carry guns.

The security required for the US politician eclipsed that typically required for the country’s own politicians. Icelandic President, Gudni Th. Johannesson, reportedly travels unaccompanied on private errands and can be spotted in thermal baths with locals.

so at his stop at Höfði (house where Reagan-Gorbachev summit in Reykjavík occurred), @vp was met by this not-so-subtle display and then the mayor said he grieved the loss of the INF treaty that emerged from the summit but was recently withdrawn from by the trump administration pic.twitter.com/89P8nQmupc

Upon arrival, the vice-president was met with displays of LGBT support. Businesses displayed gay pride flags and Mr Johannesson sported a rainbow bracelet.

Chlorinated chicken in the UK

The vice-president travelled next to London with the UK government enduring a stormy week over Brexit.

Mr Pence largely stuck to the script in his meeting with Prime Minister Boris Johnson, offering support for his plan to exit the EU and saying the US would work on a trade deal “as soon as you are ready”.

But in his response, Mr Johnson told Mr Pence that the UK was “not too keen on that chlorinated chicken,” referring to the US practice of washing chicken with chemicals that is banned in the EU.

The phrase has been invoked frequently as shorthand for concern about a post-Brexit trade deal between the US and UK which some fear could leave Britain vulnerable to lower animal hygiene standards.

France sends the US another, smaller Statue of Liberty