The Biden administration is struggling to find space for a surge of migrant children and teenagers that is almost three times the level seen early last year. 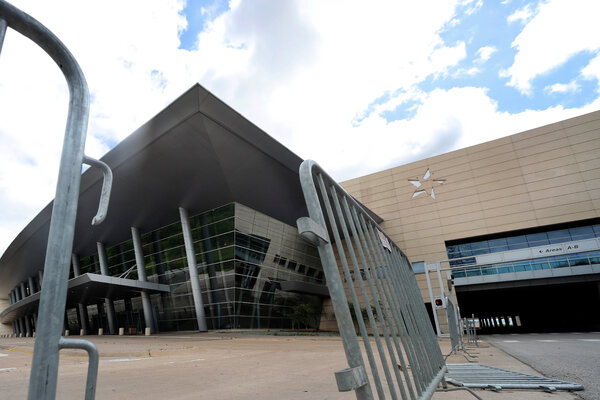 Migrant children are being forced to sleep on gym mats with foil sheets and go for days without showering as the Border Patrol struggles to handle thousands of young Central Americans who are surging across the southwestern border, some of them as young as a year old.

Children are arriving in groups and alone, some of them clutching phone numbers of relatives scrawled on little pieces of paper, according to two court-appointed lawyers who are monitoring conditions at facilities along the border. Many of the children interviewed by the lawyers in recent days said they had not been allowed outdoors for days on end, confined to an overcrowded tent.

“It’s an urgent situation. These children are caught up in a crisis,” said Leecia Welch, a lawyer who visited a holding facility for migrant children in Donna, Texas, that was built to house 250 people but which last week was holding about 1,000.

More than 9,400 minors — ranging from young children to teenagers — arrived along the border without parents in February, a nearly threefold increase over last year at the same time, presenting the Biden administration with an urgent humanitarian challenge as it opens the door to children and gradually welcomes in families fleeing violence and poverty in Central America.

Two Department of Homeland Security officials confirmed on Monday that the administration planned to shelter thousands of teenage boys at a convention center in downtown Dallas. The administration is opening another temporary facility in Midland, Texas, at a former camp for oil field workers. The Department of Health and Human Services is also considering a proposal to house migrants at a NASA site, Moffett Federal Airfield, in Mountain View, Calif.

The backlog in migrant shelters, which until recently were strained by coronavirus occupancy limits, has caused a logjam in Border Patrol processing facilities and resulted in the detention of many children for several days longer than the maximum 72 hours allowed under federal law.

Troy Miller, the acting commissioner of Customs and Border Protection, said last week that those housed at the border stations have full access to meals and medical care, and are provided showers every 48 hours.

The southwestern border typically sees a surge in migration during the spring months, ahead of the lethal summer heat. During the current fiscal year that started Oct. 1, Customs and Border Protection has recorded more than 396,000 migrant crossings, including at official ports of entry, compared with about 201,600 during the same period last fiscal year.

A majority of those crossings involved single adults, who under current rules are often quickly expelled back to Mexico or their home countries. But President Biden has declined to expel unaccompanied children back to uncertain fates in Mexican border cities, and the number of those cases has reached more than 29,700 this fiscal year — about 400 a day so far in March — compared with 17,100 during the same period last fiscal year.

There is widespread concern that their numbers in coming months could break the record set in May 2019, when 11,000 underage migrants were encountered by the Border Patrol.

$200 Million, Jailed Immigrants and a Democratic Bastion Under Fire

‘Trump Just Used Us and Our Fear’: One Woman’s Journey Out of QAnon