WASHINGTON — Before dawn on an October morning in 2015, representatives of the United Farm Workers turned up at a strawberry plant nursery in Northern California to meet with workers and urge them to consider unionizing.

They were able to enter the nursery’s property thanks to a state regulation, issued in 1975 and unique in the nation, that allows union organizers to meet with agricultural workers at work sites in the hour before and after work and during lunch breaks for as many as 120 days a year. The regulation’s drafters said this was the only practical way to give farmworkers, who can be nomadic and poorly educated, a realistic chance to consider joining a union.

On Monday, the Supreme Court will hear arguments in a case brought by the nursery, which argues that the access regulation amounts to a government taking of private property without compensation.

The case, the court’s first major encounter with a labor dispute since the arrival of Justice Amy Coney Barrett, has the potential to define what union organizers can do on California farms. But it could also have far-reaching consequences beyond such campaigns, including limiting the government’s ability to enter private property to conduct health and safety inspections of facilities like coal mines and pharmaceutical plants and to perform home visits by social workers charged with ensuring child welfare.

There are reasons to believe the court will be skeptical of the access regulation. The court has in recent years dealt blows to public unions and limited the ability of workers to band together to take legal action over workplace issues. At the same time, the court has been protective of property rights.

A video from that October morning shows a boisterous crowd waving union flags and speaking in Spanish on bullhorns. The two sides differ about what it depicts.

Mike Fahner, who owns Cedar Point Nursery, the business at the center of the case, said the video was evidence of an invasion. “We had strangers on bullhorns starting to march up and down through our buildings and literally harassing people, trying to coerce them to go outside,” he said. “They’re here to work.”

Mario Martínez, the general counsel of United Farm Workers, said he saw no union organizers on the video, noting that the access regulation does not allow them to enter work areas. “The video shows workers going out on strike, their own workers,” he said.

The union’s organizing campaign at Cedar Point was short-lived, as officials soon concluded that there was not enough support among the workers to conduct an election. Cedar Point filed unfair labor practices charges, saying the union “organized a strike on private property, blocked ingress and egress, interfered with production activities, created an atmosphere of intimidation and coercion and took access improperly.”

In 2016, the California Agricultural Labor Relations Board sided with the union, dismissing the charges. “While U.F.W. organizers met with striking employees and were present during the strike,” a board official wrote, “the actions of the striking workers are not attributable to the U.F.W.”

Joshua P. Thompson, a lawyer with the Pacific Legal Foundation, which represents Cedar Point and a second business challenging the access regulation, said that what precisely happened in 2015 was beside the point.

“Our claim does not turn on their behavior on that October morning,” he said of the union organizers. “Our claim is that the access regulation by its nature takes the property interest.”

Though there is no other law like the one in California, the Supreme Court has said a federal labor law, one that excludes agricultural workers, may allow union organizers to enter private property in limited circumstances. “If the location of a plant and the living quarters of the employees place the employees beyond the reach of reasonable union efforts to communicate with them,” Justice Stanley Reed wrote for the court in 1956, “the employer must allow the union to approach his employees on his property.”

Mr. Fahner, the nursery’s owner, said the state regulation was a relic of an era before smartphones and social media, when it was only possible to communicate with agricultural workers where they worked.

“Unions have their place,” he said. “I’m sure they do. It’s just this law in today’s world is no longer necessary.” 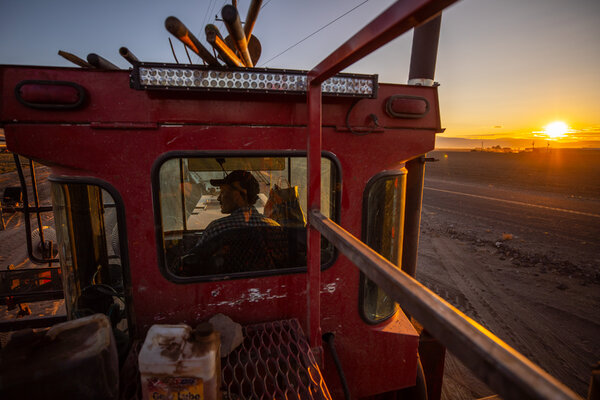 “You can communicate with people around the world effectively,” he said, “without having to have access to a person’s private property and place of business.”

In court papers, the nursery said that 90 to 100 percent of its workers had cellular or smartphones.

Mr. Martínez said agricultural workers were hard to contact away from their workplaces.

“The population of farmworkers we have now are mostly immigrants, largely Indigenous,” he said. “Many of them do not speak Spanish, much less English. They have little formal education, sometimes not even completing primary school.”

“The idea that farmworkers have internet is just not true,” he said. “Most farmworkers do not have computers. Workers do tend to have cellphones, but many of them are the older-style flip phones.”

Even if organizers could obtain workers’ phone numbers, he said, a cold call from a stranger was likely to be greeted with suspicion. Face-to-face communication, he said, remains crucial.

Lawyers for the state labor board told the justices that union organizers had used the access law sparingly. In the fiscal years ending from 2015 to 2020, they wrote, organizers sought access an average of about 19 times annually. “By contrast,” their brief said, “there are more than 16,000 agricultural employers in California.”

The case, Cedar Point Nursery v. Hassid, No. 20-107, could do more than affect union organizers in California. It could also limit other kinds of entry onto private property, including by government inspectors.

Supreme Court precedents draw a distinction between two kinds of government takings of private property — those that physically claim a property interest and those that impose a regulatory burden.

The first kind — “per se” takings — requires compensation even if the property interest in question is minor. But regulations amount to takings only where the economic effect is significant.

The narrow question for the justices is whether the access regulation amounts to a per se taking.

But lawyers for the labor board said a ruling for the businesses challenging the law could have vast implications for all sorts of government activities.

“It would imperil an array of state and federal policies authorizing limited access to private property for a variety of purposes, including health and safety inspections, social welfare visits, utility repairs, and hunting and fishing,” they wrote in their Supreme Court brief.

A brief filed by associations of counties, cities and mayors went further, saying the businesses challenging the access regulation “propose a revolution in takings jurisprudence whereby governments must pay whenever they enter onto private land.”

The Supreme Court’s precedents point in opposite directions. In 1982, the court ruled that requiring landlords to allow cable television companies access to their property was a per se taking of property requiring compensation, even if minimal. But in 1980, it ruled that a California Supreme Court decision that allowed high school students to gather petitions at a private shopping mall did not amount to a taking of the mall’s property.