Home » Americas » Coldest air in years advances on US and Canada

The polar vortex is expected to sink across much of
North America
in coming days. 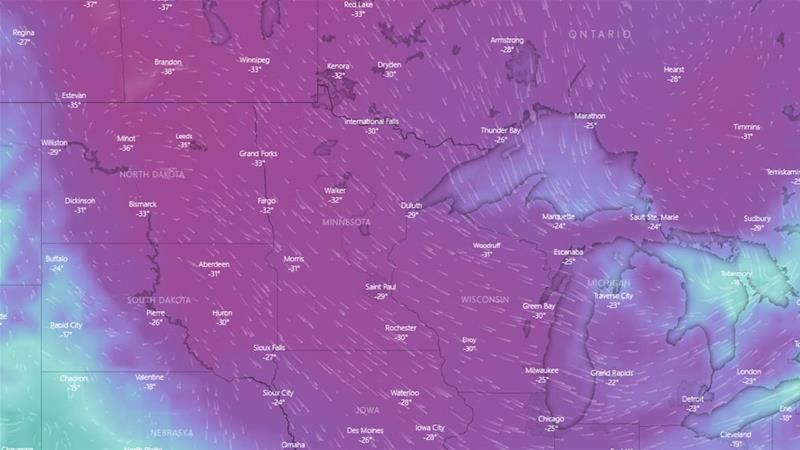 Much of the Plains and Midwest of the United States, as well as parts of Canada, have already had their fair share of classic January weather. Blizzard conditions, heavy snow, and bitter cold seem to be the norm for the beginning of 2019.

In coming days, an arctic blast that is plunging southward from northern Canada will be accompanying some of the coldest air seen in years.

The reason for this is commonly referred to as a polar vortex outbreak.

The polar vortex is a large pocket of very cold air that sits over the polar region of the northern hemisphere in the winter.

This large air mass of extremely cold air can sometimes find its way into southern Canada and the US when it breaks off from where it originates. This usually happens when a large area of high pressure in the Pacific helps to steer the air mass from the north down towards the US.

When the polar vortex arrives it can bring subzero temperatures to the US and Canada for days at a time.

When the strong steering flow from the Pacific high begins to weaken, usually the polar vortex will retreat north again and temperatures will begin to come back up.

We are already beginning to see this cold air sink south across the Canadian border and into the Midwest today. But it will be Tuesday that we begin to see the real effects of the polar vortex.

Southern Manitoba and Ontario, as well as northern Minnesota, will see lows down to -28C on Tuesday.

Then, on Wednesday morning, those temperatures will dive down even further with widespread temperatures as low as -35C to -39C across southern Canada and the US northern Plains and Midwest.

On Thursday, that cold blast will push east to include much of Quebec, Pennsylvania, New York, and northern New England.

Winds during the week will also be a consideration. Winds will blow from the northwest between 15 and 25 kilometres per hour. When you add those winds to those extremely low temperatures, the wind chill values will feel as low as -40C to -45C.

Dozens of cities across the region are expected to break minimum temperatures records for those days.

By Friday, the Arctic air will begin to retreat but even as temperatures begin to rise, many areas will still experience temperatures well below average as we begin the month of February.