A police officer fatally shot a Black man early Tuesday in Columbus, Ohio, three weeks after a county sheriff’s deputy killed a Black man in the state capital, which ignited a round of protests against police brutality.

“Our community is exhausted,” Mayor Andrew J. Ginther said during a news conference.

Mr. Ginther said the fact that the officer did not activate his body camera until after Tuesday’s shooting “disturbs me greatly,” particularly with the city still reeling from the Dec. 4 death of Casey Goodson Jr., which was not captured on video.

Though the Columbus officer did not have his body camera turned on during the shooting, a violation of department policy, the police’s body cameras are equipped with a feature that starts recording 60 seconds before they are turned on.

When the officer did turn on his camera, the playback feature captured the shooting. The footage, which the mayor said he expected would be released on Wednesday, did not capture audio, so any verbal exchange before the gunfire was not recorded.

The name of the 47-year-old man who was killed has not been released. Neither has the name of the officer, who was relieved of duty and forced to turn in his badge and gun, Chief Thomas Quinlan of the Columbus Division of Police said in a statement.

“This is a tragedy on many levels,” Chief Quinlan said. “We promise that we will provide as much transparency as possible on our part, both with investigators and the public.”

According to a description of events from the police, officers responded at 1:37 a.m. to a call that a man in an S.U.V. was turning the vehicle on and off for “an extended period of time.” When officers arrived, they found a door to a garage open and a man inside. 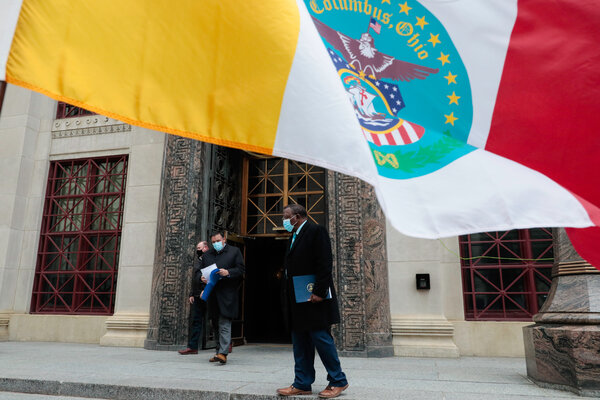 In the body camera footage, the police said, it appears that the man walked toward the officers with a cellphone in his left hand. An officer then opened fire.

No weapon was recovered at the scene.

The police said it appeared that there was a delay in rendering first aid to the wounded man, who died at a hospital shortly after. The Ohio Bureau of Criminal Investigation is leading the inquiry in the case.

Mr. Tucker, 32, said he felt that the police owed the public an explanation, particularly amid the outrage that resulted from Mr. Goodson’s death.

“I’m not sure what will happen yet,” Mr. Tucker said. “But my immediate thought is, ‘It’s going to go crazy.’”

Many people took part in protests and rallies in Columbus, including one at the Statehouse, after Mr. Goodson, 23, was killed this month by a Franklin County sheriff’s deputy.

The details of that shooting are murky. Sheriff’s deputies are not equipped with body cameras, and questions remain about what led to the gunfire.

According to the U.S. marshal for the Southern District of Ohio, Peter Tobin, officers on a fugitive task force saw Mr. Goodson waving a gun in his car. Jason Meade, the sheriff’s deputy, then chased and confronted Mr. Goodson, who was not the target of the search.

Mr. Goodson had a license to carry a firearm. The Columbus police, who are investigating the killing, said they recovered a gun from the scene but did not specify where.

His death prompted condemnation from his family and the community at large, with Mr. Goodson’s relatives describing him as a gentle soul and a caretaker of the family.

Mayor Ginther on Tuesday asked the community for patience as the investigation into the latest shooting plays out, but he acknowledged the justifications for anger. He criticized Mr. Tobin, who had said after Mr. Goodson’s death that the shooting was justified.

“How can we ask the public and the community to let a process play out so that truth and justice can be served?” Mr. Ginther said. “If we’re asking the community to have patience, and have confidence in the process, the least we should expect is that from law enforcement professionals.”