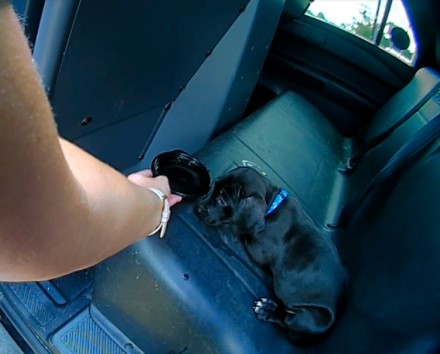 A police officer is being hailed a hero for helping to save a puppy that was locked in a car on one of the hottest June days in Georgia. Officer Howell of the Duluth Police Department was flagged down by a Walmart employee in the parking lot who noticed the pup in the dire situation.

‘Officer Howell could see and hear the dog in distress from the extreme heat,’ states a Facebook post by the Duluth Police Department on Wednesday. ‘Moments later, Officer Howell was able to unlock the door with a tool and save the puppy.’

The police department’s Sgt Jill Manders then took the puppy, which ‘was in obvious distress’, and gave it water.

Later, the puppy’s owner came out of the Walmart after shopping and said she was inside for just a short while.

According to a timestamp by a Walmart employee, the owner was actually in the store for close ot an hour.

‘With the car off and being there for nearly an hour the inside temperature was over 119 degrees,’ the Facebook post states.

The puppy’s owner faced charges from Gwinnett Animal Control. The owner’s identity was not released.

Suspect held after two are shot dead on US university campus