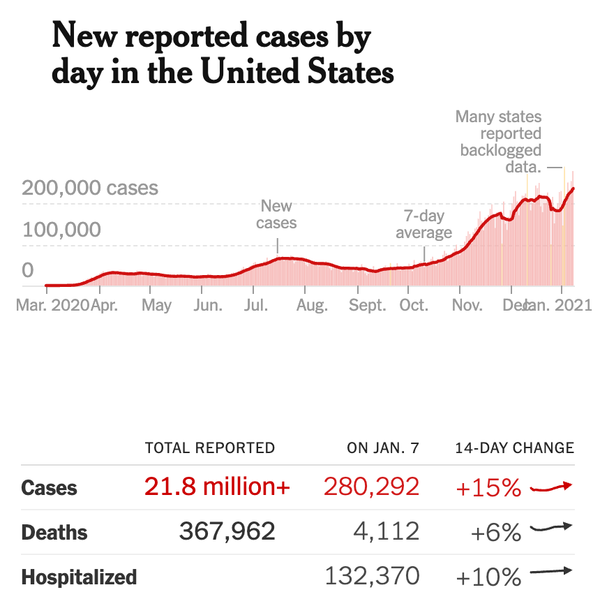 With at least 4,111 deaths, the U.S. set a record for daily reported deaths for the second day in a row.

The E.U. secured 300 million more doses of the Pfizer-BioNTech vaccine.

Vaccines and the need for speed

Weeks into the American vaccination effort and the country is terribly behind schedule. Of the roughly 21.5 million doses that have been distributed, only about six million have been injected into the arms of Americans, according to data from the Centers for Disease Control and Prevention.

One solution, President-elect Joe Biden believes, is to not hold back.

His administration announced today that it would release nearly all available vaccine doses when Mr. Biden assumed office later this month. That’s in contrast with the Trump administration’s practice of holding back roughly half of the vaccine supply to ensure enough supply for a second dose. (Both the Pfizer and Moderna vaccines require two doses given weeks apart.)

Releasing a vast majority of the vaccine doses would go against the recommendation of officials from the Food and Drug Administration, but a transition official told The Times that Biden would use the Defense Production Act, if needed, to ensure that enough doses were available.

To be sure, there are many reasons for the painfully slow rollout. Some experts say distribution has sputtered because of a lack of administering capacity and several logistical hurdles, rather than a severe shortage of doses.

“This is not the problem we’re trying to solve right now,” said Dr. Leana Wen, an emergency physician and public health expert at the Milken Institute School of Public Health at George Washington University.

But releasing the full supply of vaccines could ease a critical bottleneck. The announcement coincided with a letter from eight Democratic governors imploring the Trump administration to release all available doses to the states as soon as possible.

During an interview this week with a local radio station, Mr. Biden also said he planned to set up thousands of federally-run vaccination sites across the country. They would be in places like high school gyms and sports stadiums, and staffed by federal workers, volunteers, FEMA, the military and others.

This week, under intense criticism about the slow pace of the rollout, the Trump administration began urging states to start vaccinating people beyond the first priority group — the nation’s 22 million health care workers and three million residents of nursing homes and other long-term care facilities.

“It would be much better to move quickly and end up vaccinating some lower-priority people than to let vaccines sit around while states try to micromanage this process,” said Alex M. Azar II, the health and human services secretary. “Faster administration would save lives right now, which means we cannot let the perfect be the enemy of the good.”

Public health officials worry that upending the months of discussions about who should get the vaccine first could bring more chaos to the rollout and increase the likelihood that more vulnerable Americans could be skipped over.

Other ideas. The Times’s Opinion section asked public health experts for their thoughts on how to speed up vaccine delivery. Their ideas include using a lottery system, targeting hot spots, using algorithms for distribution and not pressuring those who are hesitant about the vaccine to take their doses.

The virus stunts the economy. Again.

The Labor Department reported a loss of 140,000 jobs in December — the first net decline in payrolls since April and was a discouraging reversal to a once promising recovery.

Why has job growth suffered? Blame the resurgent pandemic.

As cases surged this fall, state and local officials reimposed restrictions on businesses like restaurants and hotels, and consumers pulled back on spending. It’s a strong sign that the economy won’t fully recover until the pandemic is under control.

Despite the gloomy report, my colleague Neil Irwin, who covers the economy, argued that there is an opportunity for 2021 “to be the year of a remarkable bounce-back.”

With the Democrats in control of Congress and the presidency, there’s a greater chance for a fiscal stimulus; non-hospitality sectors — like construction and real estate — are improving; and the prospect of widespread vaccination could lead to a boom in leisure activity later this year.

In the U.S., the list of states that have identified the dangerous new coronavirus variant is growing. Texas, Connecticut and Pennsylvania confirmed their first cases, joining California, Colorado, Georgia, Florida and New York.

Israel will tighten its current lockdown as health experts believe the new highly transmissible variant of the virus has fueled a rising infection rate.

Brisbane, Australia’s third-biggest city, is heading into a three-day lockdown after reporting its first case of a highly transmissible coronavirus variant from a person who had not recently traveled.

In New York City, which is seeing a surge in cases, the police commissioner, Dermot F. Shea, tested positive for the coronavirus.

The British government is encouraging health care providers to use two arthritis drugs to treat severely sick Covid-19 patients, after the release of promising data from a clinical trial.

Britain also granted emergency approval to the coronavirus vaccine developed by Moderna, making it the third shot approved for use there.

In New York, the fear of violating the strict eligibility rules has left vaccine doses languishing in freezers for weeks, with some unused doses being thrown out.

Indonesia’s influential council of Muslim clerics announced that a coronavirus vaccine made by the Chinese company Sinovac was acceptable under Islamic law, removing a potential obstacle to its use, Reuters reports.

Pfizer and BioNTech said that their vaccine was effective against one of the mutations present in the new contagious variants identified in Britain and South Africa.

The wealthy are trying to jump the line in the vaccine rollout, though they probably won’t have much success.

I am one of 22 women on the U.S. women’s over 60s field hockey team. We were supposed to compete in the 2021 Masters World Cup tournament in Cape Town, South Africa, in September, but the pandemic forced its cancellation. To keep our team cohesive and to encourage fitness during the pandemic, we’ve participated in a variety of challenges in which we track exercise, nutrition, mental health improvement and community service, recording our progress on a variety of online tools. Then, we meet via Zoom periodically to share “chalk talks,” check in with each other, celebrate milestones and otherwise engage in silliness. I’ve never felt more part of a team before, and for this I am grateful.

The Price of Trump’s Migrant Deterrence Strategy: New Chaos on the Border

Denver Braces for a Blizzard, a Day After Basking in Spring Sunshine